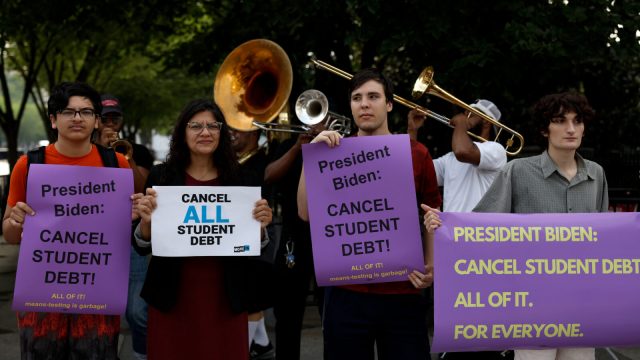 The Biden/Harris administration is finally unveiling its student loan forgiveness plan, and the results are more promising than many could have hoped.

While the administration is not offering complete student loan forgiveness to the majority of debt holders, it could immensely alleviate the strain on former students working toward paying off what is sometimes monumental debt. The plan can get a bit confusing, however, as it provides different levels of forgiveness for different types of loan holders. Still, almost anyone without a strong financial backing should see some return from the new policy.

What is the new student debt relief plan?

The Biden/Harris administration announced the new relief plan on Aug. 24 to widespread excitement from borrowers. The plan compiles several parts, including the final extension of the student loan repayment pause and “targeted debt relief” for low and middle income families.

In what is promised as the final extension of the student loan repayment pause, the White House announced that repayments won’t officially kick back in until January 2023. That gives borrowers the remainder of 2022 to get their finances in order, and hopefully apply to get at least some kickback from the student loan forgiveness plan. There are no steps required on the part of the borrower to be included in the continued repayment pause. It will occur automatically, according to an announcement from Federal Student Aid (FSA).

Several plans also offer hope for future and current borrowers. In tandem with the forgiveness options detailed below, the Biden/Harris administration is also proposing changes to the existing income-driven repayment plan. The altered plan would require repayment totaling “no more than 5 percent” of a borrower’s monthly “discretionary income,” down from the previous 10 percent. It would also raise the amount of income considered non-discretionary, thus lowering repayment costs, forgive up to $12,000 in debt following 10 years of repayment, and cover a borrower’s unpaid monthly interest. This should help to control sky-high interests.

The plan will additionally ensure that borrowers “earning under 225 percent of the federal poverty level” — an amount that equals out to approximately $15 minimum wage — won’t have to pay on their loans at all. In these instances, interest would also be controlled, preventing it from racking up while borrowers aren’t paying on a monthly basis.

Signing up for student loan forgiveness is a bit more complicated. Targeted debt relief aims to relieve at least a portion of the burden on borrowers’ backs, and varies in amount depending on the amount owed, grants received, and current job position.

In order to be eligible for any amount of student debt forgiveness, borrowers must make less than $125,000 for individuals, or $250,000 for families. If you make more than this amount, you likely won’t be able to claim any forgiveness. For those that fall into or under these income brackets, however, debt relief is on the way.

Borrowers who received a Pell Grant while enrolled in university are now eligible for up to $20,000 in debt cancelation. If you owe less than $20,000, the relief should cover every penny of what you owe. If you owe more, it’ll none-the-less be a comfort to see a full $20,000 shaved off your overall debt.

Borrowers who didn’t receive a Pell Grant are still eligible for debt cancelation, just not quite as much. Those who never received a Pell Grant still qualify for up to $10,000 in debt forgiveness. Once again, if you owe less than $10,000, the government will provide the money to finish paying off your student loan debt.

Then there’s the relief being offered to employees of “federal, state, Tribal, or local government; military; or a qualifying non-profit.” The Public Service Loan Forgiveness Program aims to forgive the remaining balance on qualifying applicants’ loans once they’ve made 120 payments on the loan.

A number of borrowers will be automatically eligible to receive relief, thanks to existing records available to the U.S. Department of Education. If the department doesn’t have your income information, or you aren’t sure if it does, however, you’ll need to apply. The department noted its aim to make an application available to the public in the coming months, at which point people can input their data and secure their relief. The application will be available before the repayment pause ends in January 2023.

Users who’d like to get a heads up when the application becomes available can sign up for alerts via the Department of Education subscription page.