Since its release in June, Child of Eden has universally been touted as being the single greatest excuse for owning a Kinect on Xbox 360. With such high expectations on other platforms, does Child of Eden make the jump to a new console with a lot of that momentum intact?

The game itself is a very simple one. At its base, Child of Eden is a rail shooter. Movement is fixed, but the player can move a cursor around the screen in order to take down enemies, avoid attacks or obstacles and pick up support power-ups to rack up a score.

Oh, and there is a story. Though, it’s really only there to hold the game in place, and really isn’t necessary in the first place. It’s even a bit odd and confusing to explain, but let’s give it a shot.

Child of Eden takes place in the somewhat distant future. Humanity is slowly dwindling, and all that exists is now archived into databases floating around in space. Someone leaves the database doors open and they quickly fill with viruses. It’s up to Lumi, a girl that was born on a space station and has never stepped foot on Earth, to repel the viruses and restore peace to the internet, which is now referred to as Eden. Of course, Lumi is also captured by the viruses, and it’s up to the player to save her, so she can save the internet.

Yeah, it didn’t make a whole lot of sense to me either, but hey there you go.

Child of Eden is the neon-colored child from the mind of Tetsuyz Mizuguchi, the man behind such design masterpieces as Rez, Lumines and Every Extend Extra. Since Child of Eden was announced, Mizuguchi has said he wants to create the ultimate sensory experience, seamlessly combining the senses of touch, sights and sounds.

The sights are appropriately brightly colored and I assume that if the inside of a computer could look like an ocean or a forest or a load of machinery, Child of Eden nails it perfectly. There’s so much stuff going on at one time that, whether you like the game as a whole or not, you’re likely to silently say “wow” to yourself at least a few times.

Players will traverse through the levels and stare in amazement as a holographic whale flies by on screen, and be even more awestruck as it transforms into a phoenix, which also happens to be the boss for that particular level. You may even need to play a level multiple times in order to actually see everything. 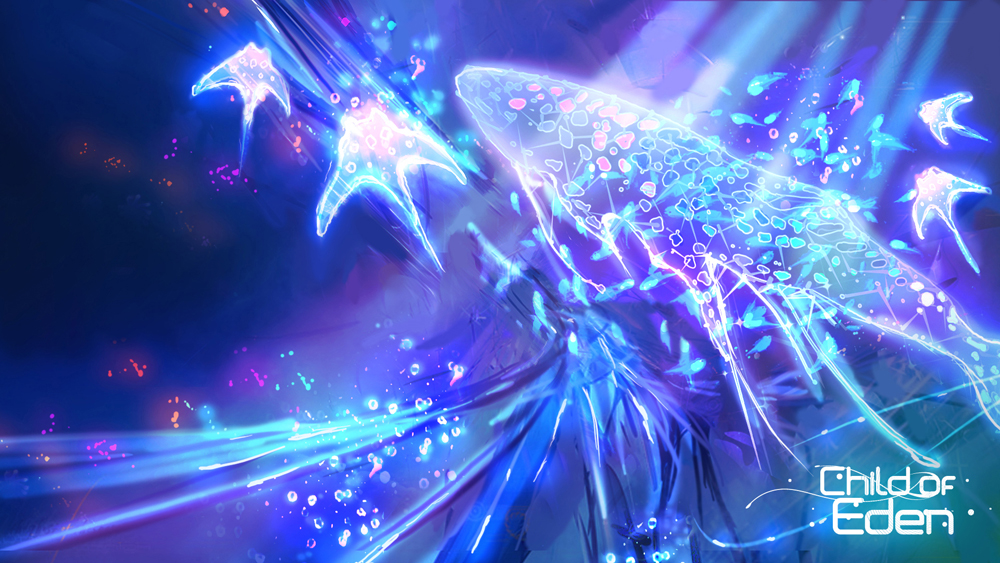 This, of course, comes with a downside. Scenes can sometimes get a little too busy, and it may be difficult to tell when an enemy attack is actually coming towards you or if there’s a wall or other obstacle that needs to be taken out before the player takes damage. That being said, it really doesn’t take away from the game too much, especially since there’s a sort of visual and audio warning for the player when there’s danger nearby. A circle in the middle of the screen will actually glow purple in the direction on the screen that the attack is coming from and the music also gets a slightly sinister feel when there’s something potentially harmful in the way.

This works directly with the way the game feeds the sense of touch. No matter which control scheme you use, be it the Move controller or a Dualshock, the controller will actually vibrate in your hand to the beat. Both control styles are perfectly acceptable, but playing with the Move is clearly more fun and immersive.

There’s three weapons at the player’s disposal. The default weapon is a sort of lock-on missle. Drag the cursor over an enemy in order to lock-on to it, up to eight locks. When you want to fire, you can either flick the Move controller, or hold down a button to lock-on and release to fire.

The second weapon is called the Tracer. It has more of a rapid-fire machine gun effect. It’s not quite as strong, and you don’t earn as many points when using it, but it’s the only way to damage enemies when they’re colored purple, and it’s also the only way to take out enemy attacks before they hit you.

The third and final weapon is Euphoria. This is the last-ditch weapon that, with the press of a button, all the enemies on screen disappear. This weapon is such a big deal that there’s actually a bonus to your score at the end of the level depending on how many Euphoria bombs you have left.

Recall earlier when I had mentioned that the controller vibrates to the beat of the music? Not only is this one more thing adding to the immersion of the game, adding to that sense of touch, but the beat itself is actually crucial to the player’s score. While you can try to pass the levels flailing and button mashing like a maniac, locking on to the maximum eight targets and releasing a volley of rockets in time with the beat will actually rack up a score multiplier, and is the only way to get a high rating on the levels.

Both control schemes work well, although playing with a normal controller feels a little off. I’m not sure if it’s the very slight lag in the cursor when using a normal controller or if it really is just that much different with motion control, but anyone planning on playing Child of Eden without a PlayStation Move may want to reconsider.

The final sense, sound, is actually cooler than you’d think simply by listening to it. All of the music in the game is performed by the band The Genki Rockets, and features a mix of rock and techno amongst the levels available.

What’s even cooler about the sounds is when you pay enough attention, you’ll notice that enemies and attacks actually add a dynamic element to the gameplay. Fire off a salvo of rockets and a burst of a chorus might play, or a word or two from a surreal-sounding vocalist. Each shot fired in rapid-fire with the Tracer adds a small, repetitive sound effect that mixes in with the rest of the music. Each enemy vanquished and attack foiled brings about a strange silence to the otherwise busy audio. There are some parts of the game where I played differently or used different weapons during certain parts just to see what certain sound effects sounded with the base music playing. It’s a really neat experience, and one that I don’t think will ever be duplicated.

However, there are two big things to get past, and one is the fact that this is a very small game. There are only five levels…er…”archives.” They take about 15 minutes to complete as well. So, theoretically, the game should only take an hour and 15 minutes if you disregard times in the menus or any potential retries. To be fair, there are plenty of unlockables to gather beautifully done art and add neon critters floating around on the title screen, but there isn’t a whole lot of replay value unless you’re a leaderboard junkie.

The other thing to get over is how surprisingly difficult Child of Eden can be. You have to collect a certain amount of stars in each level to unlock the next one. I actually had to re-play the earlier levels a few times in order to get enough stars. Keep in mind that I played the heck outta Rez, which is very much a similar game, and played it quite well. It’s not just a simple lack of skill here. This requirement isn’t a huge problem if you have both control schemes available to you, as the stars are considered new for each. For example, if you played the first level and got three stars with the Move controller and four stars with a regular controller, you technically have seven stars.

It should be noted that there is such a skill level that can be achieved so that the player is one of those kinds of experts that can play through the game, take out every single virus (which is MUCH harder than it sounds,) and look great while sticking to the beat. However, the amount of effort that could potentially go into this for just five levels really doesn’t seem like it’s worth the effort.

But of course, those of us with multiple consoles may have the question in their minds. “Kinect or PlayStation Move?” I’ve played it on both, and while it’s really cool playing the game on the Kinect and feeling like some kind of Techno Jedi, the Move is ultimately much more responsive simply due to the fact that you actually have an input. Flicking your wrist to fire your weapons on the Kinect works well, but can be kind of hit-or-miss at times.

If nothing else, Child of Eden on the PS3 has 3D support, so those of you with the most expensive TVs in the world can look great wearing big, bulky glasses and waving a wand with a big glowing ball around. I promise I won’t laugh. Much.

Overall, Child of Eden is a very unique and impressive game. The fact that the game retails at $40 for such little content makes this a very hard sell, especially considering the fact that this could have very easily been a downloadable game for $20 or less. If you don’t mind dropping the cash on a game that really breaks new ground, or can stand to wait for a sale or price drop, Child of Eden is definitely something that gamers should look into.

Child of Eden delivers an experience unlike any game I've played and the visuals are something of the highest level of creativity imaginable.