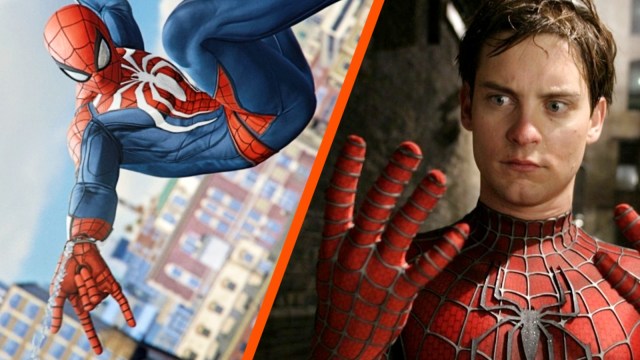 Images via Sony/Marvel. Remix by Danny Peterson.
Review of:

It’s any random day of the week, so it’s the perfect time to celebrate Sam Raimi’s 2004 masterpiece Spider-Man 2. Coincidentally, Insomniac Games’ hotly anticipated videogame sequel to 2018’s Spider-Man has also received an update by way of an apparent casting change for one of the main characters.

For all of the above reasons, Spider-Man 2 trended on Twitter Thursday, including the Raimi film being celebrated for its numerous expertly composed shots.

One movie fan proclaimed the Tobey Maguire-starring sequel to be the best Marvel film of all time.

One Twitter user took the opportunity to call out Bill Nunn’s Joseph “Robbie” Robertson — an editor at The Daily Bugle and main friend of J.K. Simmons’ J. Jonah Jameson — as an oft-overlooked, yet “underrated” supporting character.

The third act of the film was also praised as “close to perfection.”

Even though the animated Spider-Man: Into the Spider-Verse might be the GOAT of web-slinger movies, overall, one fan was quick to declare Spider-Man 2 as reigning supreme in the live-action space.

Of course, the upcoming Insomniac videogame Marvel’s Spider-Man 2 — which exists in a separate universe from the Raimi film — was also part of the conversation due to voice actor Scott Porter announcing in a since-deleted Twitter post that he would not be reprising his role as Harry Osborn. According to the now archived tweet (via GamesRadar), this was due to the developers going in a more “photo real” direction, with the age difference between Porter and the character being “too much to overcome.”

“I was bummed but I get it. Gonna be an incredible game,” Porter reportedly wrote.

Porter also voiced Heimdall in God of War: Ragnarok, which only hyped up one fan’s anticipation for Porter’s Harry Osborn reprisal. Sadly, that fan will probably be disappointed once they hear the news of Porter’s departure from the Insomniac game.

Another videogame fan was simply curious about what Harry’s new look might be, given that he will likely have a redesigned face that goes along with the recasting, just like what happened to the Peter Parker character in the first game from its original 2018 release to the remaster.

However, one fan pointed out that we hardly ever saw Harry in the first game, so maybe it won’t be that jarring of a change, after all.

There is not a firm release date set for Insomniac’s Spider-Man 2, but the developer has reassured fans it is still expected to hit the PlayStation 5 sometime in 2023.