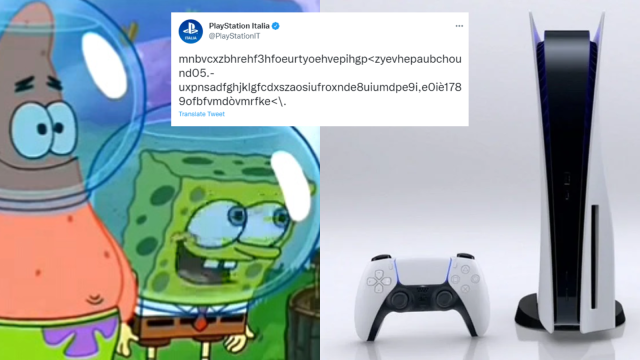 It’s no secret that brands compete against each other on social media to grab consumers’ attention. And while they sometimes do this with promotional content, these accounts would share memes to prove how ‘hip’ and ‘quirky’ they are. But sometimes, that ‘quirkiness’ might go over people’s heads as PlayStation released a cryptic tweet that got gamers very confused.

PlayStation Italy released a Tweet where the company just wrote gibberish. For most people, this tweet might go over people’s heads. But if you look at the post carefully, it’s just their social media manager pressing every text and number key on their keyboard.

This tweet was bizarre mostly because PlayStation is a console. The use of a keyboard is rare unless you’re using the PlayStation store or logging in to your account. So fans reacted the best way they could, by spamming SpongeBob Squarepants memes.

Fans began to investigate why PlayStation posted this tweet and a majority concluded that it hinted at their latest video game title, Stray. Fans believed the social media manager’s cat might have gotten on the keyboard and wrote all that.

THIS IS CAT ON A KEYBOARD MEME NOT JUST A RANDOM TWEET pic.twitter.com/KlaA0SXTp7

And as it turns out, they were correct. PlayStation Italy confirmed that their social media manager was AFK due to the new video game.

“When it came out #Stray and the social media manager was AFK.”

Dang PlayStation, way a go creating a fun cryptic tweet. Not only did you confuse fans but also managed to promote your new game.

Stray is now available for PlayStation 4 and 5.