Contemplative and striking, FAR: Changing Tides is an indie adventure that should be sought out. The light gameplay and sparse storytelling may not be for everyone, but it makes up for these deficiencies with its gorgeous visual design and excellent pace. 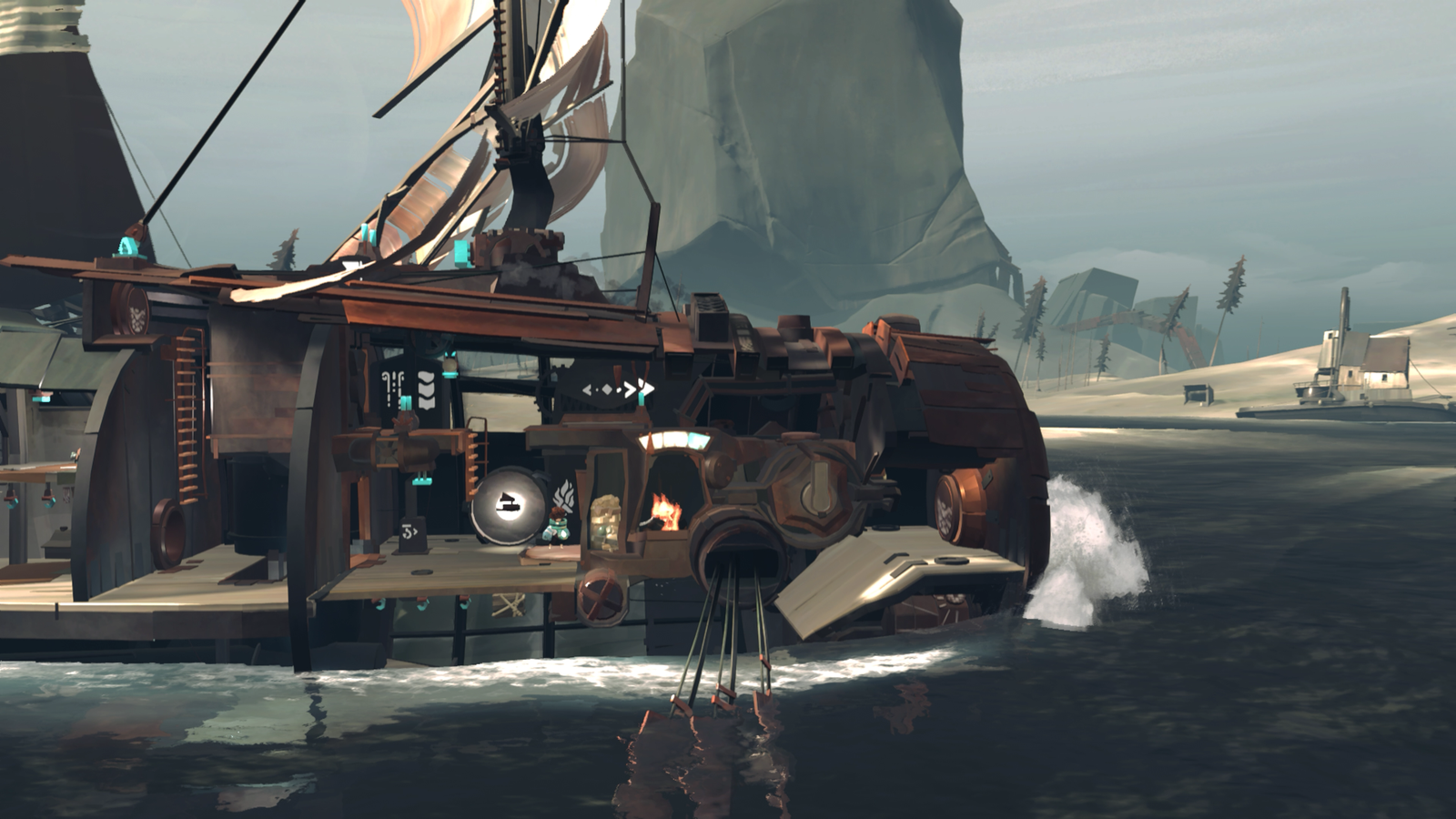 The impending apocalypse has been depicted in many ways across the gaming industry. In just the last month alone, we have gotten the classic zombie infestation variety and the less traditional killer robot variety. While these adventures are free to show the end as they see fit, what they often miss is that the end of days would likely produce many moments of solitude as well. That’s something indie developer Okomotive nailed with their first effort, FAR: Lone Sails, and something they are looking to build from with the sequel, FAR: Changing Tides.

Calling FAR: Changing Tides a full-fledged sequel is a bit of a misdirect. If anything, it could be referred to as a companion piece to the 2018 original. Whereas that adventure put you behind the wheel of a land-based vehicle, the sequel takes place almost entirely on the high seas. Your nautical vessel shares similarities to the one from the first title — there’s a sail to ride the wind with, and a furnace that can be used to burn scrap to power the ship’s paddles. Additionally, you are free to leave the ship whenever you need to. This could be to collect materials, solve puzzles, or just to explore.

When your adventure first begins, you don’t actually have access to the watercraft. You will first need to reach it, which is done through some simple platforming. Along the way, you’ll need to do some swimming as well, and thankfully, you are not limited by an oxygen meter of some kind. If you want to chill beneath the surface for a couple of minutes, feel free to do so. The fact that you aren’t limited by an oxygen tank is something I greatly appreciated — despite the gloomy setting, the title isn’t designed to explicitly stress you out in any way. Forcing you to preserve air or limit how deep you could go would have added an unnecessary level of frustration to the adventure.

Upon reaching the ship and fixing it up with a repair tool you come across, you can officially set off on your adventure. When you first hit the water, you can only move forward thanks to your ship’s sails. Before long, you can catch the wind and move along at a gingerly pace. There is a process to getting all this set up, though. You’ll need to set the mast up, then latch the sail onto a hook, then finally adjust the sail to the proper position. It’s not as challenging as setting all of this up in real life, but I appreciate that it’s not just a one-button process.

As you progress through Changing Tides, you’ll gain access to various upgrades for the ship. The most important — and thankfully earliest — one you come across is the engine room upgrade. This lets you begin the process of turning scrap you find on your journey into precious fuel for your vehicle. As with setting up the sail, you need to put the effort into fully utilizing this feature. You need to load the scrap into the furnace, light the fuse and get it started by using a pump-based machine (I’m not an engineer, so don’t expect me to nail the lingo). This is triggered by jumping up and down on a panel near the furnace itself. Once you do get a flame going, you need to carefully monitor it. If you don’t keep pumping it up, the flame will die out. However, if you pump it up too much, the engine will overheat, and you will need to cool it off using a nearby hose. Again, it’s not super complicated, but the process is involved enough to always keep you on your toes.

The other upgrades you come across aren’t as important, but they also serve a purpose. One lets you purposefully flood the ship, allowing you to navigate underwater. Another attaches a crane to the back, which can be used to open new areas or pick up large pieces of debris. Utilizing the many facets of the ship is key to completing your journey. On the whole, the game does an excellent job of spacing out the improvements over the course of the campaign. You have plenty of time to get used to using each one before you must learn how to use it in conjunction with a newer upgrade.

Every upgrade you unlock helps feed into FAR: Changing Tides‘ puzzle-solving gameplay loop. At frequent points throughout your adventure, you will come to an area that is blocked in some way. Typically, it’s a piece of debris that is too large to just be pushed aside by your ship. In these moments, you will need to leave the confines of the craft to figure out how to get past this barrier. Okomotive does not offer any kind of hind or UI for you to follow, so you’re on your own in these moments. Thankfully, the puzzles never get too difficult to solve or require an unfair amount of precision to complete. There were moments where I had to take a step back and think about what needed to be done, but nothing that caused me too much of a headache.

What I admired most about the entire experience is how relaxing it can be. Sure, there are times where you need to fix your ship, but you also have plenty of moments to just watch the world go by, sitting on the front of the boat as you contemplate how the in-game world came to the sorry state it’s in. The story is vague to the point of non-existence, so studying the environment is the only way to gain insight into what happened off-screen. That being said, the lack of a more cohesive narrative is my one real issue with the entire affair. I understand wanting to be vague and letting the player figure out what happened on their own, but just a little more clarity would have been nice.

Sparse as it may be, FAR: Changing Tides’ visual design is outstanding. Crumbled buildings and wrecked ships go a long way towards making sure you realize just how far gone the world is. The title shines brightest, though, during certain setpiece moments. A raging storm highlights the gorgeous water physics, while a display of illuminated jellyfish adds a jolt of color to the otherwise muted palette of the game. The haunting soundtrack helps set the mood during these various moments as well. Quiet and contemplative for the most part but rising in tempo during the more action-packed sections.

Meditative and slow-paced, FAR: Changing Tides is not for everyone. It never poses much of a challenge, and the vague story can be almost entirely ignored. However, the title’s excellent world design and zen-like gameplay kept me engaged, and the breezy length (sub-10 hours) meant it didn’t overstay its welcome. I know we are currently being hit with heavy hitters left and right, but if you’re in the mood for something a little different, Okomotive’s sophomore outing is worth seeking out.

This review was based on the PlayStation 5 version of the title. A copy was provided by Frontier Developments.

Contemplative and striking, FAR: Changing Tides is an indie adventure that should be sought out. The light gameplay and sparse storytelling may not be for everyone, but it makes up for these deficiencies with its gorgeous visual design and excellent pace.