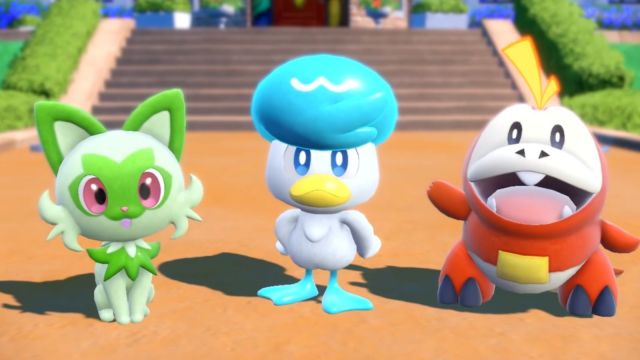 Everybody start muting your social media because Pokémon Scarlet and Pokémon Violet have leaked, and Sonic Frontiers is getting mixed reviews. Not all is negative in the gaming sphere today, as both Gran Turismo and Gears of War have announced updates to their live-action adaptations, as Netflix attempts to muscle its way into gaming once again.

Let’s dive into all this news in our latest gaming roundup.

What was Nintendo’s response? To announce a new trailer, which will be coming out at 6 AM PT. It is unknown whether or not the trailer was already planned to release or whether they moved it up to do a little damage control. It will be interesting to see if they reveal the evolutions of the starter Pokémon in the new trailer, but we won’t have to wait long to find out.

Sonic Frontiers is out and the reviews aren’t terrible

The latest game in the Sonic the Hedgehog franchise is finally here and it is… good? Our own review paints a pretty picture with our reviewer calling Sonic Frontiers the best Sonic game that they have ever played. But Sonic games have a history of being divisive, to say the least, and Metacritic is currently putting the new game at a score of 73 as of publication.

That does not mean that Sega and Sonic Team’s newest entry in the franchise does not have potential as many reviewers have heralded it as a step in the right direction. As for how it does commercially, we will have to wait and see. Sonic Frontiers is currently available on PlayStation 4, PlayStation 5, Xbox One, Xbox Series X, Xbox Series S, Nintendo Switch, and PC.

If you cast your mind back to September you might remember that David Harbour was cast in Neill Blomkamp’s Gran Turismo movie. Two more actors have been announced for the film, Djimon Hounsou and Geri Halliwell-Horner. If you don’t recognize the names, Hounsou is probably best known for his roles in Blood Diamond, Guardians of the Galaxy, and Shazam! While Geri Halliwell-Horner was one of the members of the Spice Girls, Ginger Spice, and is the wife of Christian Horner, current Team Principal of the Red Bull Formula One team.

The movie will not be a straight adaptation of any of the video games, but rather follow a player of the games who wins a competition that allows him to be a real race-car driver. The film is currently in production and is slated to release on Aug. 11, 2023.

Netflix is allowing you to become Vecna in Stranger Things VR

As a part of Stranger Things day, Netflix announced that developer Tender Claws is in production on a Stranger Things VR title. The game will see players be Vecna after he was hurled into the Upside Down by Eleven. It’s unclear whether any of the main characters other than Eleven will make an appearance and if any of the cast members will be reprising their roles from the series.

Of course, Netflix has been toying with the Stranger Things property in gaming for a while now. They have released multiple games in the past, as well as multiple Stranger Things-themed DLC. However, they do have a history of being stingy with the property as they delisted Stranger Things 3: The Game from consoles and removed the Stranger Things DLC from Dead by Daylight. In fact, there was even a Stranger Things VR experience on the PlayStation store which was also delisted. The game is currently scheduled to release in late 2023 on all major VR platforms.

Gears of War is coming to the small screen

Netflix is no stranger to adult animated series based on popular video game franchises, like Castlevania, Arcane, and Cyberpunk: Edgerunners. If these two projects do well for Netflix, they will undoubtedly continue their partnership with The Coalition and make more projects in the future. We have no word on when the film is planned to be released, or who might be in the cast, but let’s hope that Dave Bautista is involved.