A great deal of care went into Stray, and the attention to detail and its beautifully crafted world make it a unique, worthwhile experience. 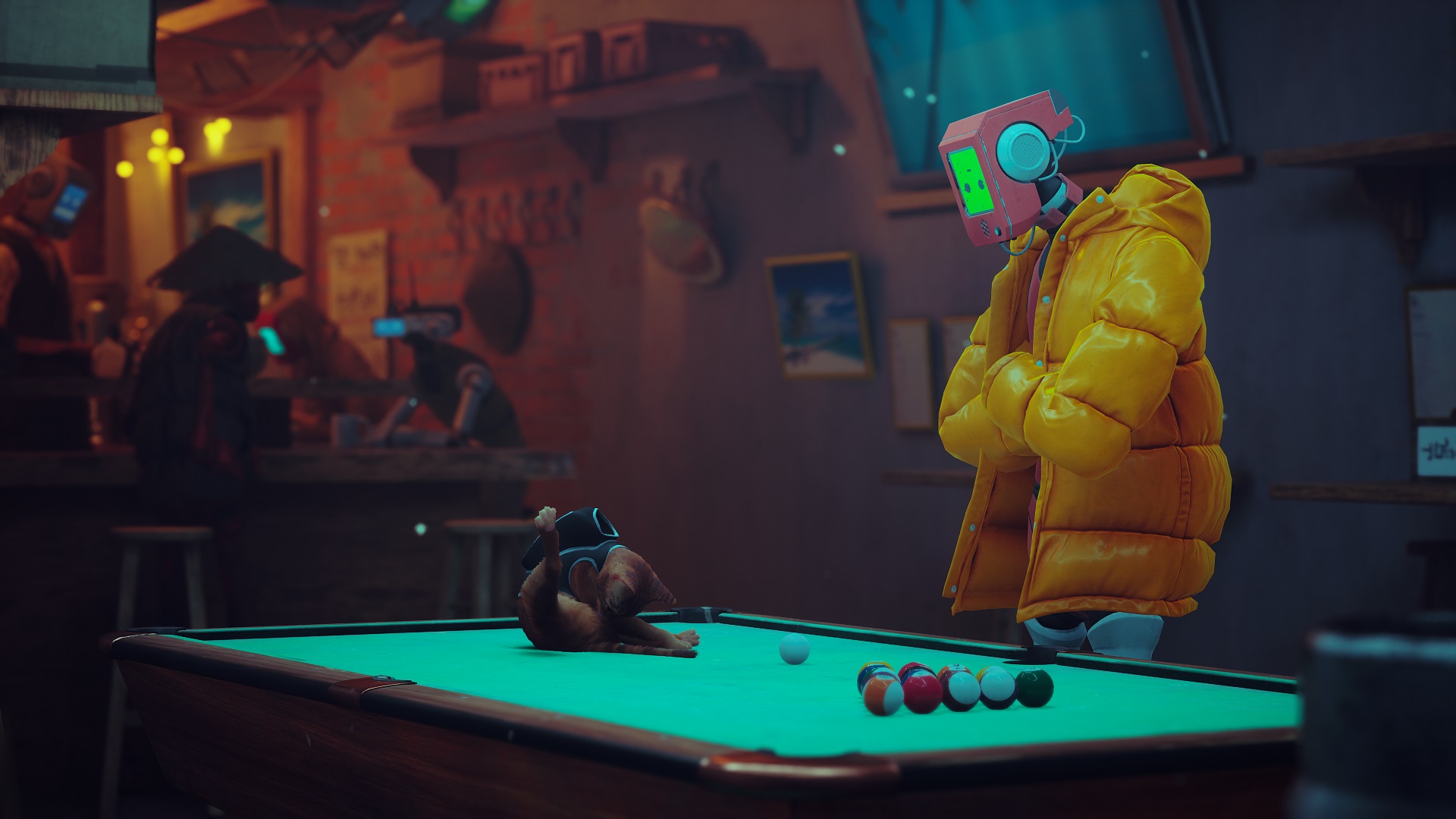 After the disaster that was the release of Cyberpunk 2077, I’m sure I wasn’t the only one searching for a well-crafted cyberpunk game to fill the void. Stray not only meets that criteria, but it goes above and beyond. I’m always talking about how I want video games to try new things and offer experiences outside the realm of possibility, and frankly, I’m tired of playing as a white man who shoots at things. I want to support creators who think outside the box and bring unique visions to their games, and Stray is a great place to start.

From its first moment, Stray had me hooked. As soon as I took control of the main character — who, for the record, is a kitty — and snuggled and played with my feline friends, I was in. Whatever this game was about to do, I was completely on board. As I explored lush greenery and wandered around on old pipes with a group of cats, I knew this was where I belonged. Then I tragically got separated from my group and found myself in completely foreign surroundings. I felt disoriented yet intrigued about what I had gotten myself into.

I quickly forgot about my original goal to regroup with my pals while I traversed this new area. Narrow alleyways between towering buildings attempted to slow me down, but perfectly placed dumpsters and window sills provided a way forward. It turns out I was not alone, and something was leading me through the winding cityscape between buildings, across scaffolding, and on rooftops. This digital presence needed someone resourceful — a small cat, perhaps — to transfer their consciousness from a nebulous network into a physical body. A small floating drone becomes the vessel for this unknown presence who quickly becomes our companion.

Our new drone friend, B-12, has lost most of their memories and can’t seem to figure out who they are or how they got here. So we traveled together, searching for clues about the world and finding a way out. B-12 translates language for you and provides guidance with what little knowledge it has about the city. It also helps by holding your inventory of items for solving puzzles and getting where you need to go — like a far less annoying Navi. In fact, B-12 is immediately so helpful and kind that I couldn’t help but form an attachment. As my only friend in a completely unknown place, I was grateful to build such a unique connection between these characters.

Running around as a small orange cat with a tiny drone companion is just as cute and fun as it sounds, and jumping from building to building and weaving your way into small spaces feels natural and well-designed. Stray does a fantastic job of making the player feel like they are a cat right away. The sense of scale perfectly demonstrates how its protagonist fits into the world around them. Environments can feel so large and objects seem unattainable at times when you roam around as such a small creature. Movements are quick and fluid as you maneuver through obstacles and climb your way up heights. Likewise, the animations as you run and jump seem realistic and add to that sense of belonging — heck, even environmental objects respond naturally to the cat interacting with them. All of these elements are so well thought-out and intentional; it’s refreshing to experience a sense of scale that is so well executed.

Stray absolutely nails how its main character fits into its larger world, but the core gameplay also makes an impression — despite being technically simple, it’s quite immersive. I never felt like the game put me on rails; I was free to explore but it also guided me in the right direction if I was ready to move on. Whereas an action-focused game like Uncharted or Horizon Zero Dawn guides players with clearly marked pathways, painted white stones, and bright yellow ropes, Stray offers guidance in a way that feels more grounded. Bright neon signs with arrows pointing in the direction I should go in a cyberpunk game just makes sense. I prefer this environmental and story-based guidance to a boring cinematic climbing sequence, and when a lot of the gameplay includes climbing and jumping, it’s nice that the traversal is so dynamic.

Levels are visually interesting to traverse too. The world you move through is so meticulously designed and well thought-out that it’s completely satisfying to take in the sights and gather any information you can about this place you’ve fallen into. Environmental storytelling plays a huge role in peeling back the truth behind this strange society, and each object is placed intentionally to provide details or characterization. Traveling only with your small drone, B-12, you do encounter other life in this desolate city. Seemingly the last forms of life remaining in the world, humanoid robots help you on your journey.

They were originally created to provide utility for humans, but as it seems that all humans are now extinct, they’ve built their own community. These robots have evolved to behave more like humans, creating their own language and crafting art and music. Unsure of why they continue these behaviors or why the humans did them in the first place, they find themselves perpetuating behaviors because, well, that’s what they’ve always done. Not only have they picked up on tending to plants or playing guitar, the robots mimic the worst aspects of humanity too. The city is already built to be stratified by social class, where those in the slums essentially live in a garbage heap. Others above them, both physically and in social status, have more luxury. Not everything is perfect for those robots either, as these communities continue to use a power structure based on control, and heavy surveillance and policing.

Thankfully, Stray handles these themes with grace. The game weaves social commentary into the basic designs of its world, but there’s still a lighthearted tone and a focus on the community the inhabitants of the city have built for themselves. Injustice and inequality are often themes in cyberpunk dystopias, and Stray is no exception. Of course, there are cool futuristic gadgets and the world feels visually stunning, but bubbling under that gorgeous exterior lies filthy truths about society and inequality. That’s what I love so much about the cyberpunk genre: the juxtaposition of wildly interesting environments with corruption and suffering just below the surface. The shiny new futuristic toys and the bright neon lights are meant to distract from the reality of the world.

As all good cyberpunk is, Stray is influenced by classics like Blade Runner. While elements of the environment look similar to other cyberpunk landscapes, and some storytelling feels familiar, the game never feels derivative. It has its own voice and identity that makes it unique, not just because you experience the story as a cat, but also because of the unique visual designs and world-building.

Stray is truly one of the best new games I’ve played in recent memory. Every area feels well-paced, capturing my attention and focus, but never overstaying its welcome. The visuals and world design are intriguing and compelling. The music is unique and perfectly fits the tone of the game. Every aspect of Stray feels intentional and well-designed. From its controls and movement to the visuals and environmental design, it’s clear that great care was taken to craft this experience. A strong contender for my personal game of the year, Stray is a unique cyberpunk masterpiece that everyone should experience.

This review is based on the PlayStation 5 version of the game. A copy was provided to us by Annapurna Interactive.

A great deal of care went into Stray, and the attention to detail and its beautifully crafted world make it a unique, worthwhile experience.