Xenoblade Chronicles 3 continues the series' tradition of massive maps and intuitive combat, but this time offers a story that elevates the experience to new heights. 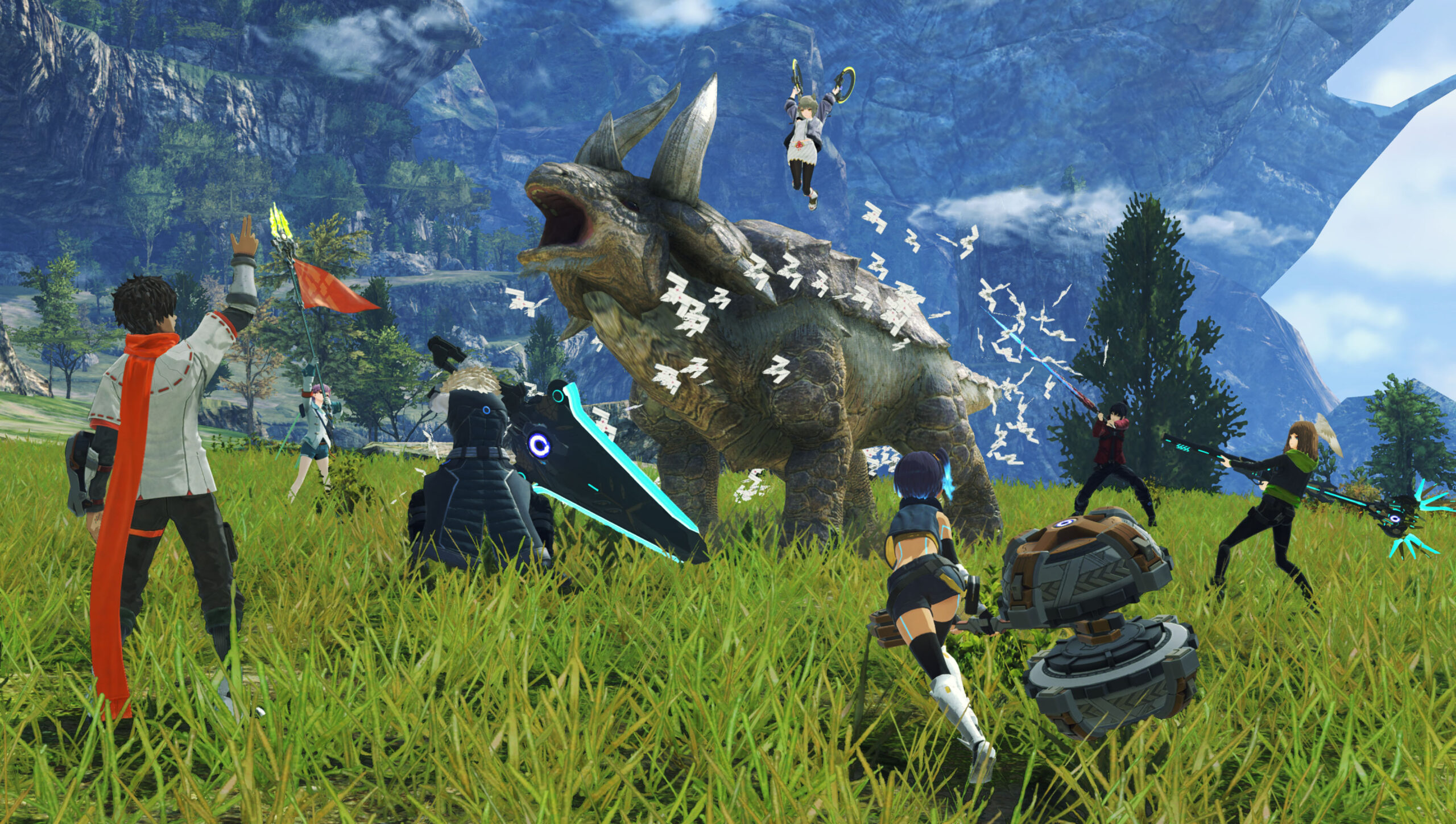 When Xenoblade Chronicles 3 was first announced, I was apprehensive about diving into another chapter of Monolith Soft’s franchise solely because of the time it would take to finish. This franchise has delivered epic JRPG stories time and again, and while the games are always a joy to play, the prospect of sinking another 100 to 150 hours of my life into the next chapter was daunting. Now, after weeks of exploring this massive game world — and equally massive, complex story — I can say that I’m glad I took the leap, as Xenoblade Chronicles 3 may very well be the best of the series.

Xenoblade Chronicles 3, like the two games before it, is a standalone adventure that shares certain beats with its predecessors. Each game has built upon the foundation established in the original Xenoblade Chronicles for the Wii, adding new features and arts (read: abilities/attacks) all while pushing the graphical power of the Nintendo systems they reside on. Xenoblade Chronicles 3 continues that tradition by making one huge change noticeably early in the story: the player’s party now has six (or seven) characters, instead of the usual three. And, mind you, this is just the first of many new additions to the franchise.

The story in Xenoblade Chronicles 3 involves a rather nasty war. Keves and Agnus, two nations that reside on the continent of Aionios, are in constant conflict. So much so that each nation’s ruler — a queen — creates new citizens by pulling some of the essence that powers the nation and all its mech, and feeds it into a pod of bodies who are then ‘born.’ The ‘children’ are bred and trained to fight. It is all they know, as their entire existence revolves around the ongoing war. Each citizen is given a 10-year ‘lifespan’ that is spent constantly fighting. If a soldier survives all 10 years of battling over and over, they are given a homecoming, where the same queen that created them takes their life, allowing their life essence to return to the pool that powers the nation. It’s pretty dark and twisted stuff.

When we come into the story, the three surviving members of a Keves pod — Noah, Lanz, and Eunie — are nearing the end of their lifespans, living out their days fighting for Colony 9. A mysterious object lands in a territory currently being fought over with Agnus, so Noah and co. are dispatched to investigate. Unbeknownst to them, Agnus has sent their own pod of troops, consisting of Mio, Sena, and Taion, to do the same, and when the six come together they do what they were created to do — fight each other.

The mysterious object is in fact an older man — one who’s lived longer than 10 years — who has a special crate containing the power of Ouroboros. During the battle, a Moebius — a vile, wisecracking mech unit — shows up, and the old man unleashes the Ouroboros’ power on the six soldiers. This sets off a series of events that presents the true meat of the story, as the six characters — faced with the new prospect that there is more to life than just fighting and dying for 10 years — come together to fight their true enemy. It’s here where Xenoblade Chronicles 3 truly begins.

Behind the nation-states and their conflict is another secret war being fought by the two constructs: Ouroboros and Moebius. Our party of six uses the power of Ouroboros, which allows two characters to merge into one special mech unit that can do amazing things. Moebius, on the other hand, seemingly controls everything else, including both nation-states, and our heroes find themselves being hunted by all sides as they seek to unravel the truth behind their existence and the world itself.

Xenoblade Chronicles 3 ups the combat options from the previous games. Fighting is still done with the use of special moves called arts, and combat is executed much like an MMORPG, where the player manages a series of cooldowns and works to position their main character while the AI controls everybody and everything else. However, a few new wrinkles have been added into the mix to allow for some truly devastating combat. On top of each character’s arts, there are special arts that fill up when basic arts are used, and a chain mechanic allows the team to weave together a series of attacks in a fun little mini-game for even more devastating damage. Lastly, there are the aforementioned Ouroboros moves, where two characters merge to become a cool-looking mech unit.

This is the absolute deepest combat the franchise has featured to date, and it helps to keep the fighting fresh, even after a hundred hours. If there was one drawback from previous games, it’s that the constant fighting and managing cooldowns got boring after 20 or so hours, but Xenoblade Chronicles 3 keeps it fun deep into the game’s story. In fact, the first 30 hours or so are spent slowly learning all of the combat and game mechanics, and once you are fully free to move the story forward, you’ll feel empowered like never before.

In addition to the combat, characters can also switch classes (think jobs in Final Fantasy), so they can learn other skills. Noah starts the game as a damage dealer but can change classes to tank (Lanz’s base class) or healer (Eunie’s base class) and learn their skills, and vice versa. When all six come together, it affords the player two characters in each class, and mixing and matching are deep and fun. Throughout your journey, you can also recruit a seventh party member via hero quests. This allows the lead character to also learn those skills while the hero is a member of the team. Like the world map and story, there is a staggering amount of customization available here.

Xenoblade Chronicles 3, like its predecessors, pushes the Nintendo Switch’s technical capabilities. The world is massive and always looks stunning as you explore the different biomes of Aionios. The addition of six or seven characters in combat creates visual chaos for the player, but thankfully, it doesn’t slow things down. The character models adopt a cell-shaded look, and the monsters and Moebius mechs are fully realized designs.

The voice acting is top shelf, with a cast of primarily English actors performing the roles, and the unique accents help to differentiate the characters from each other. The soundtrack, courtesy of Yasunori Matsuda, is as epic as the game itself, and both the voice acting and music are beloved hallmarks of the series.

Xenoblade Chronicles 3 does have a few issues, including the aforementioned chaos during combat, where it can be extremely difficult to discern who the player-controlled character is attacking, especially when the other characters in your party are all doing their own thing. If you’re battling against a mob of enemies, that chaos is amped up even more, and you really can’t manually adjust the camera as you can in an MMO like Final Fantasy XIV, which means you really have to really pay attention in battles.

And while the breadth of Xenoblade Chronicles 3‘s story might not be an issue for some, the twists and turns the narrative takes can get hard to follow, especially in the late game when the story spins off in some very weird directions — directions fans of the franchise will find exciting, for sure.

Xenoblade Chronicles 3 is yet another grand chapter in Monolith Soft’s epic franchise, and long-time fans will absolutely love it. New players to the series will find it easy to pick up and play, as the gameplay tutorial stretches for a few hours, easing you into the game’s world and mechanics. Combat has never been this deep, and the characters are well-rounded and performed so well that you actually begin to care about their wellbeing while directing them through battle after battle across Aionios. Xenoblade Chronicles 3 is the first of a series of massive AAA JRPGs hitting consoles within the next year, and if this is the appetizer, fans of the genre are in for one wild ride.

This review is based on the Nintendo Switch version of the game. A review code was provided by Nintendo.

Xenoblade Chronicles 3 continues the series' tradition of massive maps and intuitive combat, but this time offers a story that elevates the experience to new heights.