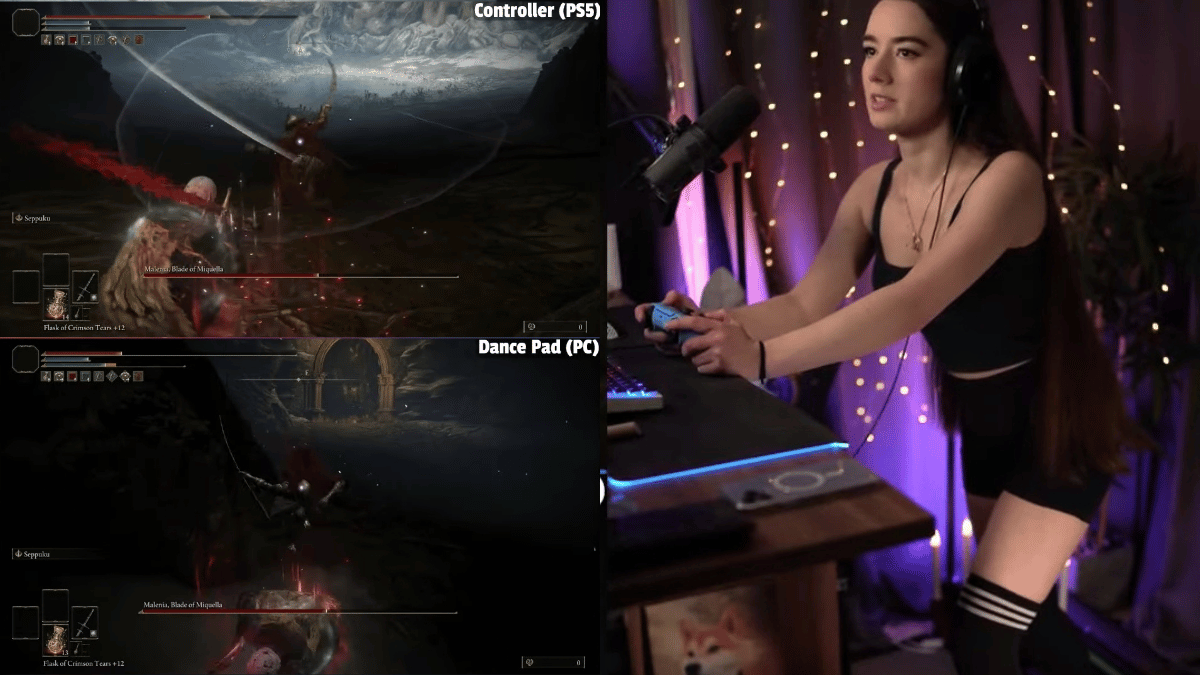 It’s safe to assume that most gamers who bested Elden Ring last year would wear their victory over Malenia, the Blade of Miquella, like a badge of honor. Well, prepare for that accomplishment to feel just a little less special.

Self-proclaimed variety streamer (translation: Soulsborne masochist) MissMikkaa beat Malenia twice simultaneously, while running two separate copies of the game. For one instance of the game she was using a PS5 controller, and a dance mat for the other. By her own count, she beat this ridiculous challenge on her 199th attempt.

At the turn of the last decade, the resounding success of Dark Souls breathed new life into a gaming subculture of punishing oneself by repeatedly bashing your head against a seemingly impossible task until something clicks and you overcome the overwhelming odds. In other words, many gamers around the world adopted a ‘git gud’ mindset.

Of course, as easy it was to condescendingly dole out ‘git gud’ as advice, there was always a grain of truth to it. As punishing as FromSoftware games from Demon Souls all the way through to the smash-hit Elden Ring (as well as all of the ‘soulsborne’ genre games they inspired) are, for the most part they were tough but fair. Once that certain something clicks in one’s mind, whether it be switching up your build or learning to telegraph a boss’s attack pattern or any other number of factors, the odds suddenly turn in your favor and the challenge becomes far less daunting.

Which is why many streamers, including MissMikkaa, take it upon themselves to up the challenge by imposing certain restrictions, handicaps, or additions. We’ve seen people take on Souls games in increasingly dumbfounding ways – from no-hit completions of the games, to spud controllers, and Rock Band drum kits, hell – we’re certain some have seen some blindfolded runs along the way too.

What MissMikkaa pulls off, however, is one of the more impressive feats we’ve seen accomplished (you can view the full fight in the above video) in a Soulsborne game. Malenia on her own is difficult enough, but to do so in two separate instances of the game simultaneously, on two different control inputs? My pea brain hurts at the thought of the multitasking required to pull it off. We salute you, MissMikkaa.

In case you’d forgotten already, late last year Elden Ring swept The Game Awards and took out the coveted title of Game of the Year, which was quite the feat considering it was up against the equally stellar God of War Ragnarok. Of course, it wasn’t without its meme worthy moments.