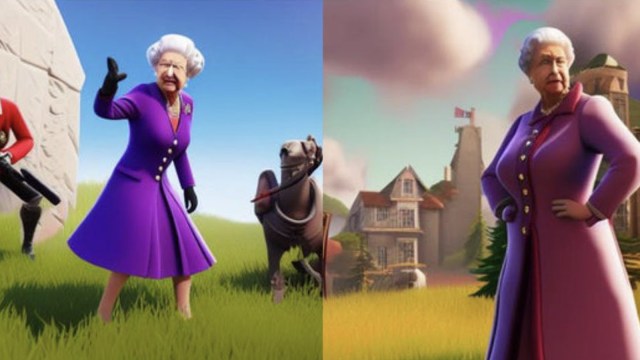 Pretty much every fictional, and non-fictional, figure is in Fortnite nowadays, from Marvel heroes like Ironman all the way to football stars like Neymar Jr. Well, thanks to AI, one Fortnite fan has imagined another icon entering the game — none other than the late Queen Elizabeth II.

Shared first to Reddit and then later to the blessed social media account Weird Dall-E Generations, this collage of four images appears to showcase what a Queen Elizabeth II outfit would look like in the popular Battle Royale title, and they are pretty impressive.

Of course, Epic Games has no plans to bring Queen Elizabeth into the game (yet!) and these creations are simply robot-made at the request of sh*tposters. That said, if she could somehow travel on a pack of corgis ingame, that’d be great.

The power of Dall-E has been on full display across the internet for the past few months and there are plenty of unique and equally as impressive creations available to check out on the weirddalle subreddit.

Dalle-E is one of the most popular AI image-generating programs right now and it functions by taking words and generating art based on the text prompts — as you can see the results can be astounding.

While Fortnite is always updating its roster of outfits adding new characters and icons to the game for players to use it wouldn’t seem likely that The Queen will be added. Instead, this AI-generated art is the closest we will ever get to that reality.

If you’re interested in learning more about DALL-E, trying it for yourself, or just getting versed in AI art more generally you can check out this information here.

Somehow, this isn’t the strangest crossing of pop culture IPs we’ve seen thanks to AI. Need we remind you of the scarily accurate depiction of John Wick as the star of a Pixar film?