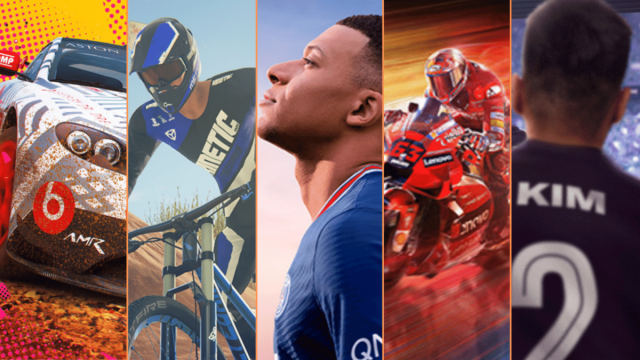 There’s no shortage of games to check out on the Xbox PC Game Pass, with well over 450 titles to pick and choose from. The sports genre is a little more on the slim side in terms of its offering and a large chunk of the list is average at best. We’ve narrowed down the five best standouts that are actually worth your time, across a number of different sporting disciplines.

Every PC Game Pass subscription is granted access to EA Play, which allows players to jump into the most recent FIFA game. Granted, FIFA 23 is just about to launch, though it won’t be coming to the service at launch, so last year’s entry will need to tide you over for now.

FIFA 22 continues to build on the foundations set by all of the previous entries in the world’s most popular football game, introducing new gameplay mechanics such as more advanced and personalized goalkeeper responses and ball physics, explosive sprint, and a number of new attacking tactics. It’s also worth mentioning that if you’re a FIFA aficionado who dislikes the changes to the most recent entry, FIFA 21 is also available on the service.

The long-running Dirt series by Codemasters has proven time and time again to be a thoroughly enjoyable racing experience. Dirt 5 serves the arcade-level petrolhead, while hardcore sim enthusiasts may still be better served in Dirt Rally 2.0, which unfortunately isn’t on PC Game Pass. However, if a more arcadey racer is up your alley, Dirt 5 has much to offer, with plenty of muddy locales to slide high-powered cars around, with ten locations and 70 routes. With multiple options for online play and a career mode with branching pathways starring Troy Baker and Nolan North, Dirt 5 has a little something for everyone.

Descenders is a game about a slightly more niche sporting discipline than soccer or motorsport, rather it tackles extreme mountain biking. Don’t be fooled by the seemingly simple premise of absolutely sending it downhill on a mountain bike, you’re going to need to put thought into the components of your bike based on the terrain and the angle of the bike as you land a jump, with many other aspects in between which will determine your success. It’s challenging, it’s a blast, and it’s well-loved — with a Metacritic score of 78.

If you prefer to approach football games from a macro perspective on the sidelines rather than stepping into the cleats of the player, Football Manager 2022 is the PC Game Pass offering for you. Budding managers are spoilt for choice of club to take the reins of, with over 2500 options available to them.

Players can develop a world-class squad of footballers and dig into the nitty gritty tactics further than any previous entry has allowed. Note this is another game that is about to be superseded, with Football Manager 2023 set to launch on November 8. The good news is, the next entry will be available on PC Game Pass from day one.

Another offering for motorsport fanatics — albeit for those inclined further toward a two-wheeled discipline — MotoGP 22 is a faithful motorcycle racing sim with over 120 riders and over 20 tracks on offer. A standout offering from this title, however, is a mode called “Nine: Season 2009”. “Nine” is a campaign offering of sorts, giving players an excellent blast from the past to relive one of MotoGP’s most heart-pounding seasons in a documentary-style format.

While it lacks the talking heads of the wildly successful Netflix series Formula 1: Drive to Survive, it allows fans and newcomers alike to experience a vertical slice of MotoGP by almost seamlessly blending archival footage and gameplay.