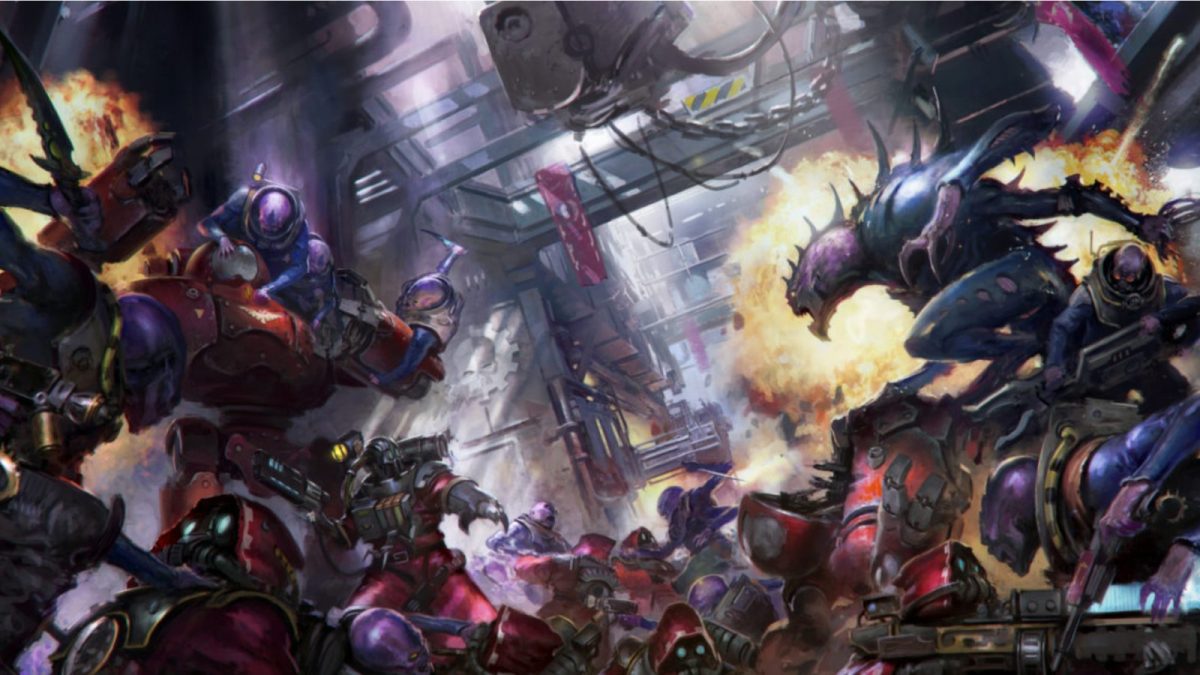 A fresh gaming adaptation is on the horizon, and fans of Warhammer couldn’t be more delighted.

The beloved miniature wargame is officially getting a streaming adaptation on Amazon, and Henry Cavill’s name is already attached to the project. The popular actor announced his involvement with a Warhammer 40K series via a post to Instagram, in which he gushed about his enduring desire to see the rich, futuristic world adapted for live action. Cavill expressed his desire to see a Warhammer Cinematic Universe — on par with the Marvel Cinematic Universe or DC Extended Universe — come into being, and promised fans that he would maintain the soul of the lore.

News that a live-action version of the enduringly popular Warhammer 40K is set to arrive on Amazon, with none other than Cavill at its helm, is serving as a much-needed balm on recent wounds. Cavill’s exit from both The Witcher and the role of Superman has been difficult for his fans to digest, so news that he will achieve a lifelong dream in Warhammer is exactly what fans needed. There’s also few actors fans trust as much as Cavill to stay true to its origins, which is stellar news for the hordes of Warhammer fans out there.

With news of the adaptation currently drenching the web, longtime fans of the miniature wargame are honing in on the minor details. We don’t know much about the Amazon adaptation just yet, but we’ve already selected the top five factions the series should highlight in its run.

Warhammer 40K has been around for a long time, so news of an Amazon adaptation is garnering widespread attention. The very first Warhammer rulebook was released in the late ’80s, and the years since have seen Warhammer become a staple of many tabletop gamers’ collections. The game has built up a huge amount of lore over the years, and more than 18 factions currently exist in Warhammer 40K canon. Some are distinctly more popular than others and, while all will likely get at least a mention in the Amazon series, fans would prefer the focus zero in on some, more than others.

The first faction that seems necessary for any live-action adaptation is Astra Militarum. If all else fails, this group of militants will serve as the clearest mirror into our own form of combat, and will feel the most familiar to audiences. Every cinematic world needs its grunts, many of whom will throw their lives away in battles dominated by imposing warlords and warrior gods, and in the Warhammer 40K world that role is filled by the Astra Militarum. Rife with tanks, heavy support, and average, dedicated soldiers, this faction will serve as the mirror to Star Wars‘ clone army — organized, capable, and efficient, but nothing much when pitted against the likes of a Jedi.

In 2022 and beyond, there’s just no imagining a Warhammer 40K adaptation that doesn’t include the Sisters of Battle. They are some of the oldest staples of Warhammer lore, stretching back to early editions of the game, and maintain as one of the most interesting Warhammer factions. The Sisters of Battle dedicate themselves to hunting down and rooting out heretics, and stand as the official protectors of the Ecclesiarchy. The faction presents a wonderful opportunity to either lean on, or mock, the same religious iconography that they drench themselves in, and should serve as a stellar opportunity to bring some truly mind-boggling — and delightful — weapons to live-action.

They’re technically a sub-faction, and they don’t have the clear name-recognition of the Space Marines, but the Blood Angels’ more intriguing and grim elements could really beef up a live-action adaptation. The Blood Angels are unique in an unfortunate trait that they all share, due to a flaw in their genes. All of the Blood Angels run a risk of succumbing to the Black Rage, a violent rage that illicits a thirst for literal blood. This rage is largely unavoidable, forcing all of them to eventually move to the Death Company, a truly brutal and savage close combat force that is determined to find either blood or death on the battlefield.

The Space Marines are an absolute must-have, thanks to numerous factors. This faction has been the inspiration for a huge number of sci-fi properties, and each of them sport some flavor of Space Marine. This is undeniably the most populous faction in Warhammer canon, and tends to be the most popular among players. There is a massive amount of lore surrounding the Space Marines, and at the end of the day any Warhammer story would be incomplete without these fearless, capable warriors.

This pick polishes off our list for two reasons: because they are one of Henry Cavill’s preferred classes, and could present a stellar casting option for the burly actor, and because they would be unbelievably cool in live action. The “first and greatest of the super-soldiers engineered by the Emperor,” this faction consists of unmatched warriors of truly god-adjacent capabilities. They are as close to genuine superheroes as they come in Warhammer, and utterly devastate against any force they pit their might against. In live-action, they are all but guaranteed to steal the show, and we would love to see Cavill enter the scene as one of these awe-inspiring champions.