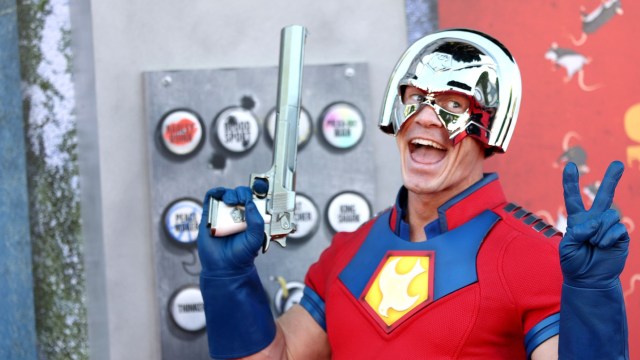 It’s a bit of a marvel to consider where John Cena’s acting career started in earnest to where it is now. Or maybe in reality, the way to think of it is that it took some of us in the audience to realize and really appreciate Cena’s talents, being that he was a professional wrestler previously.

Cena’s first real foray into the film business seemed to be leaning way too far into the stereotypical role you’d expect someone with so many muscles to show up in: the aptly titled The Marine in 2006.

Though The Marine didn’t allow for a whole lot of nuance or for Cena to show just how much depth he has, slowly the roles started to let him show off his quite hilarious side, as well as his ability to show sensitivity, depravity, and range of real emotions.

Maybe it was 2015’s Trainwreck that really started to give that glimpse, and since then, Cena’s trajectory has been climbing up to the top rope, culminating in this year’s streaming hit Peacemaker.

There’s another role in there that really did it for us, but you’ll just have to read on to reveal which performance that was, as well as some other roles that have allowed Cena to shine.

In his introductory scene, when Cena’s character literally rolls into the picture on a motorcycle, it seems like he’s just going to be some hulking threat to the two main characters here. Yet within moments, the way he gazes at Will Ferrell and Mark Wahlberg shows some subtly and understanding before we see a tender side of Cena that hadn’t been revealed before.

It doesn’t last long, but the sweet moment between Cena and his on-screen daughter feels legit, not forced, which goes a long way toward establishing him as someone who could do more, and eventually does in the didn’t-need-to-be-made Daddy’s Home 2. Cena’s facial expressions alone outact Wahlberg in the sequel, and that’s all we’re going to say about either of these films.

Cena isn’t given enough material to work with in The Marine, and it seems like he knows he is here to be the hero badass in the vein of Arnold or Jean Claude Van Damme in their early days. Cena’s moments on screen when up against the wall, however, are worthy and show the smallest peak into what he can do with more.

Cena again takes on an action role, but he does get to step things up here emotionally in The Wall. With the minimalistic take and only a few actors in the film, Cena gets to make the most of the limitations by showing some believable resiliency that has you pulling for him.

Even though Ferdinand is an animation film, Cena gets to show a great deal of what he can bring to a starring role in this film about a fighting bull (not a bull fighter, mind you) who deosn’t want to fight. It’s literally Cena evoking the lover not a fighter persona, and pulling it off well.

Ferdinand has been panned in the US and by Spanish critics, but the reviews for Cena’s performance are all largely positive. It seems Cena couldn’t catch a break finding a film that showcases both a great script, a strong movie, and all his talents. Well, that would chance.

When you first hear the groundwork for Cena’s character here, you think something along the lines of an actual line that gets uttered in this film: “Peacemaker. What a joke.”

The better of the two kinda blah Suicide Squad films, you wouldn’t have guessed from the film that his character would get a spinoff, but damn are we glad it did. Again, Cena makes the most of his time on screen, showing so much depth as Peacemaker that there was plenty more to explore in the TV show to come.

The intensity with which Cena is able to be extremely serious with such a ridiculous character, who is willing to kill and harm anyone in the name of peace, is quite impressive.

Bumblebee gets a high ranking because Cena is prominently involved, even if somehow any Transformer movie seem to transform what could be a solid acting performance into something lesser.

Cena is clearly the best thing going in Bumblebee, where he once again plays a police/military/strongman role, but at least he adds something more to what could be a dull and numbing performance in other giant hands.

Cena gets to be cool, suave, strong, and with a bit of charm in F9 where he plays Jakob Toretto, brother of Vin Diesel’s Dominic. It’s a Fast & Furious movie, so you can’t expect too much, but Cena shows that he surely does know how to gaze off in the distance and act with facial expressions alone.

If you were unsure about John Cena the actor, Trainwreck likely changed your whole perspective on who he could be. It’s safe to say not many of us expected this performance from Cena, and you have to give it to Amy Schumer for mining some gold from him, as well as her other cameo/unexpected small role costars in the film.

Cena brings the humor, heart, and hunky side to his role with grace, which is tough to think about if you’d only seen him do the strongman act before.

Shocking that this isn’t number one? Then you haven’t seen the number one on this list.

There probably isn’t a lot to delve into here considering this show is still fresh on our minds, and if you’re a Cena fan and reading this, then you’ve certainly seen Peacemaker. Let’s just say, the entire cast and crew really pulled this off, and we were quite skeptical there was gonna be enough there to make a whole series out of. We did trust that Cena could carry a role, however, because of…

The name Blockers itself doesn’t do the movie justice when it’s heard. When you see it, and the rooster in front of the title, and put the two together to think, “Ohhh, cock Blockers, I get it,” then the premise makes a whole lot more sense. It’s great that they didn’t actually use that name, especially since the movie revolves around a trio of adults’ teenage daughters.

Cena is remarkable in Blockers, which in itself is downright hilarious and sophisticated, while being slapstick, raunchy, lewd, and crude all at the same time. Leslie Mann and Ike Barinholtz are equally awesome along with Cena, to say nothing of the younger cast in the movie.

Blockers is a good time, and the best starring role that Cena has had to date. Sure, Peacemaker is great, but it’s not possible without Blockers.