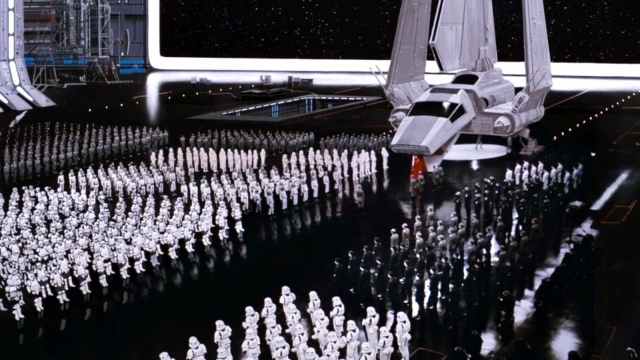 Star Wars is one of the most iconic franchises of all time. What helped make it iconic were the excellent designs of most, if not all, of the characters in the series. Even the blandest of characters are made to be recognizable in the franchise. A large part of why that is, comes from their costumes. Whether it be Han’s jacket or a Mandalorian’s armor, almost every character is outfitted to stand out.

A large part of the costuming in Star Wars is the helmets or headgear that many characters wear. Most of the characters who do wear helmets wear them because they play a part in the wars in some way, whether they are soldiers, pilots, bounty hunters, or Sith Lords. Here are the ten greatest and most iconic helmets in the Star Wars universe, from both the movies and the TV shows.

First appearing in Star Wars: Episode VI – Return of the Jedi is the tenth most iconic helmet on this list, and it belongs to the bounty hunter, Boushh. Of course, Boushh himself did not appear in that film, as Princess Leia wore his outfit and his helmet to infiltrate Jabba’s Palace and rescue Han Solo. Therefore, the helmet disguised Leia’s appearance and it also had a speech scrambler so her voice would not be recognized.

The helmet has what looks like a visor, and is accompanied by a brownish orange mask which probably houses the scrambler. Because Leia used the helmet to disguise herself – even though she was captured – it remains among the best and most iconic helmets in Star Wars.

Aside from Return of the Jedi, the most famous appearance of a scout trooper is when one punched Grogu in an episode of The Mandalorian. There’s something about their visor, the way that it is shaped like a goofy pair of ski goggles on the head of the trooper, that makes the scout trooper helmet the most comedic of all the trooper helmets, and that earns it the ninth spot on this list.

Even though there is no standard Inquisitor helmet, the range of helmets worn by the four or five Inquisitors who do wear them takes the eighth spot on our list. There are more than ten different Inquisitors, and when the Inquisitorius are in a Star Wars project not all of them appear at once. For example, the only films and television series that they appear in are Star Wars: Rebels, and the Disney Plus series Obi-Wan Kenobi.

The characters first debuted in Star Wars: Rebels and they were subsequently featured in the Star Wars: Darth Vader comic books as well as the hit video game, Star Wars Jedi: Fallen Order. While out of all the helmets worn by the Inquisitors, the best one belongs to the Second Sister, Trilla Suduri, she was not in any of the shows or movies and was the primary antagonist of Star Wars Jedi: Fallen Order. Out of the ones in the shows or movies, the Fifth Brother has the best helmet out of all them, with a metallic elongated bike helmet. Though it didn’t save him from dying at the hands of Darth Maul.

A helmet that deserves to be seventh on our list is the helmet belonging to Kylo Ren. Kylo Ren, who is also known as Ben Solo, is the child of Han Solo and Leia Organa and first debuted in Star Wars: Episode VII – The Force Awakens. When Ben Solo left the Jedi Order and joined the Knights of Ren he became Kylo Ren, wearing his new mask as a disguise and as an homage to his grandfather Darth Vader.

Not only was Kylo Ren’s helmet instantly cool the moment we first saw it in the trailer for The Force Awakens, but it was even cooler when he destroyed the helmet in Star Wars: Episode VIII – The Last Jedi, allowing for a shattered look in Star Wars: Episode IX – The Rise of Skywalker, when it was reforged by a Sith alchemist.

Ranking sixth on our list is the Royal Guard’s helmet. The Emperor’s Royal Guard also first appeared in Return of the Jedi. As their name suggests they served to protect Emperor Palpatine after the Clone Wars, although it’s not quite clear how often they needed to actually defend him, or how useful they were compared to Palpatine’s powers.

The Elite Praetorian Guard was an evolution of the Royal Guard during the reign of the First Order. There were eight members and their armor looked more like armor with their helmets covering their entire face with no eyeholes. The Royal Guard version of the look is much better with regal red robes flowing off them. Their helmet shares the robe’s regality, and it has a rubber hooded look which shelters their face bar a thin slit for their sight akin to a motorcycle helmet.

Most of the helmets on this list belong to the Empire, so this is the first and only one that belongs to the Rebel Alliance. Taking the fifth spot on this list is the Rebel pilot helmet, which first appears in Star Wars: Episode IV – A New Hope. The helmet is worn by pilots in the Rebel Alliance, and the most popular appearances of the helmet are when it was worn by Luke Skywalker, Wedge Antilles, and Biggs Darklighter.

Unlike the helmets of the Empire which usually enforced uniformity, the Rebel pilot helmet had different designs. For example Red Squadron, the team of pilots who blew up the Death Star which included Wedge and Luke, had the emblem of the Rebel Alliance painted in red. Their visor is of an amber color which makes the helmets stand out amongst their uniforms.

First appearing in A New Hope, the basic stormtrooper helmet might be one of the most recognizable helmets in all of popular culture. Fourth on our list, the basic design of the helmet as well as the black and white coloring helps enforce the uniformity of the Empire. The First Order then iterated upon the Imperial helmet design to make a sleeker one.

Not only is the basic helmet for the standard stormtrooper one of the most iconic helmets of all time, but most of the variations on the original design are also quite remarkable. Some of them look like the same helmet just with another coat of paint, like the red Sith Trooper, or the armored black Death Trooper. The Purge Troopers who appeared in Obi-Wan Kenobi also wear a slight variation of the stormtrooper design with a black helmet and a red visor. The TIE pilots wear another variation of the helmet, one that is similar to the Death Trooper with extra protection on the top, which is rounded similar to the rebel pilot helmet.

The Mandalorian helmet is easily the second greatest helmet in Star Wars. The first take on the Mandalorian armor, and for a long time the most iconic version of the armor, belonged to Boba Fett, first appearing in Star Wars: Episode IV – The Empire Strikes Back. Mandalorians as a race were introduced in the films years later in Attack of the Clones, with Jango Fett. While the green and red of Boba Fett’s helmet and the blue and silver of Jango Fett’s helmet are iconic, the sleek silver of Din Djarin’s helmet from The Mandalorian cannot be beaten. Most helmets are also accompanied by rangefinders that appear above the helmet, but they are not on all of them.

Of course, we cannot forget the brilliant armor of the Mandalorian soldiers like the one which Bo-Katan Kryze wears as well as the super commando helmets. The Mandalorians look like knights in space. They manage to have the sleek futuristic look of a Star Wars character while also conjuring up the image of an Arthurian hero.

Easily the best and most iconic of all the helmets in the Star Wars universe, Darth Vader’s helmet takes the top spot on this list. Obviously, the helmet first appeared in A New Hope, along with the man wearing it. A black helmet shaped like a skull, the Darth Vader helmet can be terrifying. The best example of this is probably in the famous hallway scene in Rogue One: A Star Wars Story, where Vader’s helmet is illuminated by his red lightsaber.

Of course, it isn’t just protective headgear for the sith who used to go by the name Anakin Skywalker. After losing to Obi-Wan Kenobi on Mustafar, Anakin’s body was burned by the lava, including his face. By the time Emperor Palpatine arrived, Anakin needed urgent care and was fitted into the Darth Vader suit shortly thereafter. Vader needed the helmet to live, as it acted as a respiratory vent.

The helmet has been damaged two notable times, once in Obi-Wan Kenobi by Kenobi himself and once in an episode of Star Wars: Rebels by Skywalker’s former apprentice, Ahsoka Tano. Each Jedi removed half of the helmet to reveal the scarred Skywalker underneath. Luke Skywalker also removed the helmet when his father was dying on the Death Star in Return of the Jedi which symbolized his turn back to the light side of the Force. The helmet was idolized by Vader’s grandson Kylo Ren after it was cremated alongside Vader’s body.

These are just some of the brilliant helmet designs in Star Wars. Across more than ten movies and plenty of hours of television, there are many unique and recognizable helmets introduced throughout the franchise. Like whichever iconic helmet you want, just don’t get caught in a hallway with anyone wearing a Darth Vader helmet, or in a hot tub with people wearing stormtrooper ones.