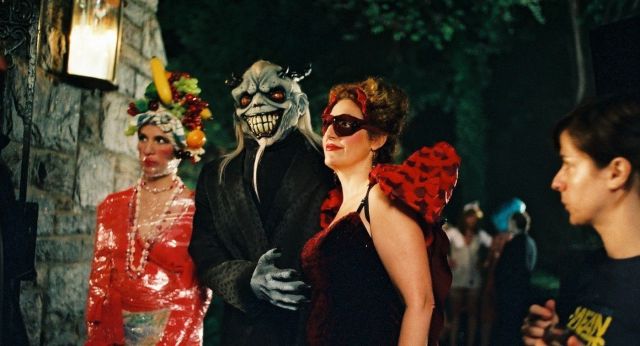 Halloween is a gift for horror movies. It provides a scary subject, a box office date for the diary, and an opportunity for audiences ready to jump out of their seats.

It’s no surprise that many horror movies are set during All Hallows’ Eve. It is a surprise that no horror made a wholesale grab for the name before John Carpenter’s seminal slasher arrived in 1978. Still, before Halloween launched a mighty horror franchise, many horror movies had seized on the spookiest time of the year to add an extra dose of seasonal spice. In the 42 years and 13 movies since Michael Myers first returned to Haddonfield and stuck a knife in the brilliant name, the slasher hasn’t managed to scare other horror films away from October 31.

As horror enjoys a golden age, we can expect more to use the date. It’s helpfully a night associated with ghosts and spirits, of course, but Halloween also provides cover for many terrors. It offers a rare chance for horror icons to walk amongst us or a good opportunity for filmmakers to play tricks on the audience.

An increasingly packed field of Halloween movies is picking up the traditions and motifs of the holiday to the point you’re just as likely to find a masked murderer as a deranged pumpkin carver or even a deadly pumpkin.

Here are 10 Halloween-set movies you can catch at the spookiest time of year, knowing you’re in for a timely horror fix.

This supernatural horror has several opening scenes. There’s the chilling pan from the house in Georgetown. There’s Merrin’s noisy misadventure in Iraq. But the one that best sets up the horror to come is the walk Regan’s mom, Chris McNeil takes home through the leaf-covered streets of Northwest D.C. As Mike Oldfield’s “Tubular Bells” raises hairs, McNeil passes some young trick-or-treaters running down the road in costume. The actress allows herself a wry smile, little knowing what waits at home.

Joel Shumaker’s Brat Pack update of the Frankenstein morality tale makes pointed use of Halloween. The psychological horror sees ambitious and reckless medical students investigate what happens beyond death, and Kevin Bacon’s David Labraccio is the third to take his life to the edge on Halloween night. He’s one of the luckier ones, although dicing with the Grim Reaper makes him confront his actions as a younger man.

When old Jud’s wife Norma suffers a near-fatal heart attack on Halloween, family man Louis comes to her aid. But no good deed goes unpunished in the second adaptation of this Stephen King classic. It’s only right Jud wants to pay Louis back, but leading him to a secret burial ground behind a pet ‘sematary’ to bury the much-loved family cat Church may not be the best way to do it.

When else could Trick ‘r Treat be set but Halloween? Antagonist Sam is a kind of guardian pumpkin for the season — someone you don’t want to meet on October 31. Dressed in a trick-or-treat costume of orange pajamas and a sack-cloth head, he only appears when a Halloween tradition is broken, and he has punishment on his mind.

This psychological thriller from one of the genre’s finest directors, Lynne Ramsay, features some of the creepiest Halloween street scenes committed to film.

To the bars of Buddy Holly’s “Everyday”, Tilda Swinton’s Eva takes a trippy and unsettling slow drive home past trick-or-treating revelers. It’s an eerie representation of the character’s inner demons as she tries to deal with the actions of her son Kevin, her role as a mother, and some disturbing memories.

A Halloween anthology that unleashed an array of horror creatives to bring their brands of terror to some horrific shorts. The movie’s directors included Neil Marshall, Darren Lynn Bousman, Lucky McKee, Adam Gierasch, and Jace Anderson. The mini-movies in the 92-minute feature include the urban legend of Sweet Tooth, the Grim Grinning Ghost, a seasonal scrap over Halloween decorations, and some deadly jack o’ lanterns.

When Eddie hears his hometown hero and heavy metal legend Sammi Curr has died, little does he know the rocker will choose him to make his homecoming gig at a school Halloween dance a reality even after death. It’s all a demonic plot, of course, but the question is whether Eddie can realize before playing Curr’s Songs in the Key of Death causes a Halloween massacre.

Whoever thought anything good could come of rock music? Trick or Treat is worth catching for some rock royalty cameos.

The director’s first movie in 17 years since his 1988 sci-fi mash-up Remote Control, it was worth the wait. Satan’s Little Helper developed a cult following for its satire and character-led comedy.

Filming of this horror phenomenon concluded on Halloween 1997 after just seven days, and October plays a big part in the atmosphere of the most famous found footage horror movie. It’s pretty chilly in Maryland as the autumn makes its presence felt. This movie all about the unseen is perfect viewing at the witching hour or, if you’re brave enough, you can head to the filming location in Montgomery County for one of the seasonal Blair Witch Heritage Hikes.

Halloween is the center of this Canadian supernatural horror that won praise for its metaphorical pairing of werewolves and a coming-of-age tale. It’s the story of two darkly-minded sisters whose relationship comes under understandable strain after a werewolf attack. The Greenhouse Bash, a Halloween party hosted by a local drug dealer who’s a target for an emerging werewolf, is just one reason it’s an ideal lycanthropic flick for a Halloween watch.