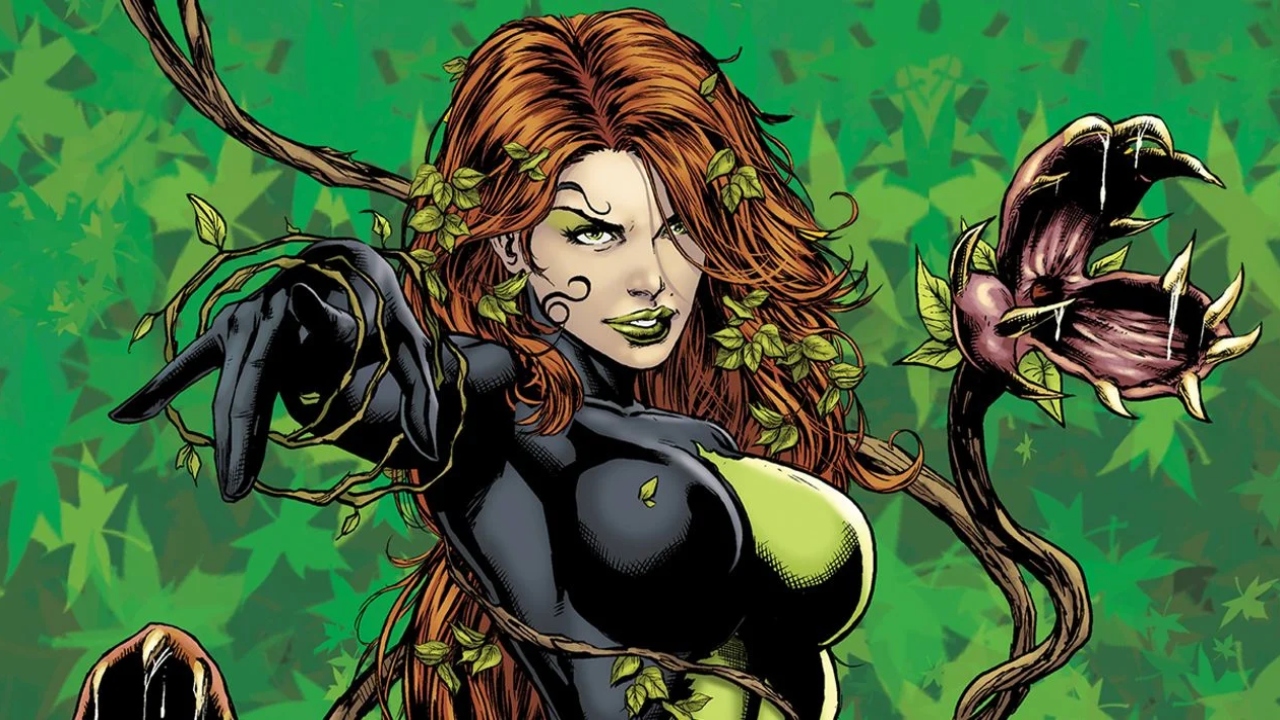 The misanthropic botanist turned eco-terrorist herself, Harley Quinn’s BFF and eventual girlfriend, Poison Ivy debuted in Batman #181 (June 1966) and made her first-ever cinematic debut in Batman: The Animated Series, in an episode titled “Pretty Poison”, wherein she poisons Harvey Dent AKA Two-Face. Poison Ivy has yet to make her modern-day feature-film debut, but Uma Thurman portrayed both Dr. Pamela Isley and her villainous alter-ego in Batman & Robin (1997).

With the recent release of Matt Reeves’ The Batman, starring Robert Pattinson as the titular hero and co-starring Zoë Kravitz as Catwoman, many Batfans have flocked to Reddit to share casting suggestions for a potential Gotham City Sirens team-up in Reeves’ Batverse. We have our Catwoman, but the infamous trio severely lacks two of its key players.

The most recent live-action versions of Poison Ivy belong to the drama series Gotham and CW’s Batwoman. Clare Foley, Maggie Geha and Peyton List, respectively, portray Poison Ivy throughout her stages of puberty in Gotham, whereas Bridget Regan was recently introduced as the Poisonous Princess in Batwoman — a casting choice that many Batfans have long anticipated. Now, we have more names to consider; Reeves’ Batman sequel is undoubtedly round the corner and the Rogues Gallery would be incomplete without its Poison Ivy. We found our Harley Quinn candidates, so here are some of Reddit’s top picks for a live-action Poison Ivy.

Ana de Armas kick-started her acting career with a lead role in the romantic drama Una rosa de Francia (2006). From there, she moved to Los Angeles, where the opportunities came knocking at her door. She landed an English-speaking role (the first of many) in Eli Roth’s erotic thriller Knock Knock (2015). In 2017, Armas rose to prominence as a holographic AI projection in Blade Runner 2049 and landed her breakthrough role in Knives Out (2019) alongside Daniel Craig. After No Time to Die (2021) gave Armas the role of a lifetime in Bond girl Paloma, she soared to even greater heights. In 2022, she is set to portray Marilyn Monroe in the biographical drama Blonde.

In the depths of Reddit, u/Kraacatoa was among the first to suggest the Knives Out star. In the Reddit post, the original author has uploaded an edited image of Ana de Armas, tinted with fiery red hair and sickly green skin, resembling the signature complexion of Poison Ivy. For long-time Batfans, she looks convincing enough; another upload by u/bhopped1 sees Armas sporting the iconic Poison Ivy corset — and she looks like the perfect combination of beautiful and deadly.

Bernardo Bertolucci’s The Dreamers (2003) marked the beginning of Eva Green’s cinematic career after starting out in theater. She achieved international acknowledgment for her lead role in Ridley Scott’s historical epic Kingdom of Heaven (2005) and went on to portray Bond girl Vesper Lynd in the James Bond film Casino Royale (2006). Vesper became one of Green’s most significant roles, even over 15 years later. For two years, Eva Green starred in the horror drama series Penny Dreadful (2014–2016), for which she earned massive critical acclaim. In 2022, Green is set to star in Lorcan Finnega’s psychological thriller film Nocebo.

Five years ago, u/gaureezy mentioned Eva Green in passing when discussing the potential actor-actress duo for Nightwing and Batgirl. A few years after that, u/sakura_drop posted an edited image of Eva Green trying out the acid-afflicted skin and rosy red lips. She looks decidedly powerful and compelling as the green-skinned Goddess, channeling the attitude of her mysterious roles as Vesper Lynd and Vanessa Ives.

Jessica Chastain, another household name, made her stage debut as Shakespeare’s Juliet. She discovered a taste for on-screen acting after a role as a recurring guest star in Law & Order: Trial by Jury. In 2008, she made her film debut in the drama Jolene, directed by Dan Ireland. She gained recognition for starring roles in several dramas, then landed a breakthrough role as Maya Harris in Kathryn Bigelow’s Zero Dark Thirty. After that, she rose to stardom and became one of the most respected actresses of our generation, particularly for portrayals in It Chapter Two (2019), Miss Sloane (2016), Molly’s Game (2017).

On Reddit, u/dylen_draws uploaded some artwork that depicts Jessica Chastain as Poison Ivy. Besides that fact that the paintwork is breathtaking, the artist manages to perfectly capture how Chastain would potentially look in Ivy’s signature get-up, complete with the addition of a beautifully-drawn vine curled around her forearm. The artwork received over 80 upvotes, presumably from Batfans that would love to see the masterpiece come to life.

Another Reddit upload saw an aged Twitter post making its rounds again as discussions resume regarding Poison Ivy casting. In the tweet, Chastain can be seen digitally edited to fit the Poison Ivy essence — and she looks perfect. However, some Redditors have argued, specifically on the above thread, that Chastain may be too old to portray Poison Ivy as the actress currently teeters towards the late 40s.

Most known for portraying Karen Page in Marvel’s Daredevil (2015) series on Netflix, Deborah Ann Woll has since reprised the role in The Punisher (2017) and The Defenders (2017). Nowadays, Woll can be recognized as Amanda Harper in Adam Robitel’s psychological horror Escape Room (2019) and its 2021 sequel, Escape Room: Tournament of Champions. Woll landed her breakthrough role as Jessica Hamby, in the HBO fantasy drama series True Blood and eventually sealed the deal with Marvel Studios and Netflix to become the MCU’s Karen Page.

In an image that makes Deborah Ann Woll look strikingly similar to pop singer Katy Perry, u/EducatorDull4620 uploaded an edit that transforms the American actress into the popular plant-themed supervillain. Surprisingly, Woll does do Mother Nature justice and looks as if she were taken straight out of a comic panel. Under the thread, u/MattRB02 commented “Great casting” and praised the choice. Admittedly, Woll is a lesser-known actress and subsequently receives less votes to take up the Poison Ivy mantle, but the shoe fits.

Rising star Jodie Comer rose to fame for her portrayal of Oksana Astankova / Villanelle in the British spy thriller Killing Eve (2018). Coincidentally, her role as Villanelle is the comparison that many Redditors have made when considering her for Poison Ivy. Comer started making waves in the film industry after playing Chloe Gemell in E4’s comedy-drama My Mad Fat Diary (2013) and Kate Parks in the BBC One drama series Doctor Foster (2015).

In more recent years, Comer has appeared in several feature-films, including Free Guy (2021) alongside Ryan Reynolds and The Last Duel (2021) alongside Ben Affleck and Matt Damon. At present, Comer has reprised her role as Russian assassin Villanelle to see through the final season of Killing Eve, which currently premieres a new episode every Sunday on BBC America.

In the Reddit realm, u/RadiioBread posted an edited version of Jodie Comer’s headshot, placing a reddish tint on her hair and switching out her black gloves for green ones. Although the visual appearance may not be as instantly persuasive as the others, Comer has an emotional range unlike any other, especially for fresh-faced talent that only emerged in recent years. In another Reddit post, u/JBbeChillin recommended Victoria Pedretti for the Poison Ivy role, but plentiful comments bashed the choice and opted for Jodie Comer instead. “Jodie Comer, probably my first and final choice for Poison Ivy,” one user wrote. Another praised Comer’s acting capability, saying, “It’s not just looks it’s acting too. Comer is a great second choice.”

For many Batfans, the choice depends on the chemistry generated from interactions between Harley Quinn and Poison Ivy, who have quickly become the biggest LGBTQ+ pairing in DC Comics history. If the actress looks the part, then half the battle is won, but the casting choice depends on much more than just appearance alone. For Poison Ivy, the lethally seductive demeanour is one of her most valuable assets, and her companionship with Harley Quinn needs to be portrayed dutifully. However, until further news breaks, all we can do is speculate.