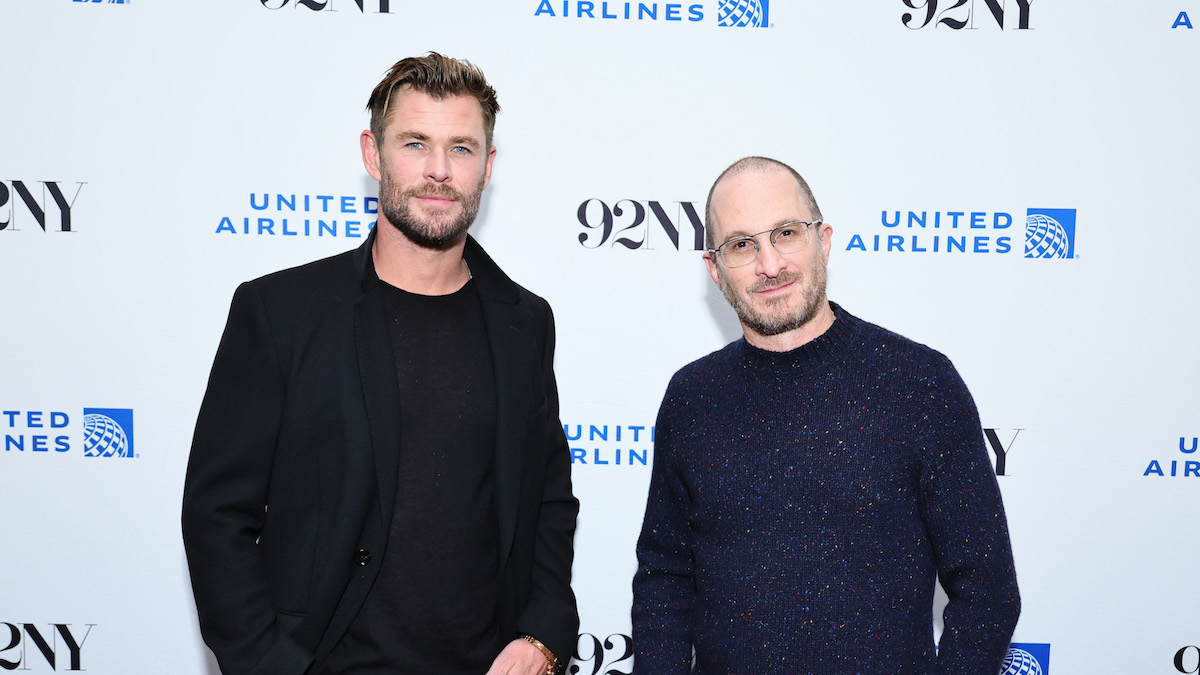 After collaborating on the slightly insane nature-testing National Geographic docu-series Limitless, director and producer Darren Aronofsky is eager for another Chris Hemsworth collab.

The director told Variety that they’re just “trying to find the right piece” that can bring them together again, professionally, in the future.

Aronofsky has created some of the most audacious movies of this century, including bona fide masterpieces Requiem for a Dream, Black Swan, and his latest The Whale. Despite the MCU’s Thor being his most famous role, Hemsworth is no stranger to out-of-the-box projects like Spiderhead and Bad Times at the El Royale, where he’s gotten to flex his acting muscles in ways that could greatly benefit an Aronofksy picture.

The actor has mentioned his plans to take a break from acting following the discovery that he’s at high risk of suffering from Alzheimer’s disease in the future. He will undoubtedly be looking for fulfilling roles going forward that justify being away from his family during filming, and that can take his career in new directions.

Despite giving it his all as Thor in the MCU, and being one of the defining talents of the franchise, the actor has also said that the only way he would come back to the character for another film was if it was a complete switch in genre and tone, from the previous installments. We know what you’re thinking and no, Darren Aronofsky is not interested, according to Variety.

Even though Aronofsky would surely make the darkest, most mind-bending Thor film ever, we’re sure Disney would be there to clip his wings, as has happened in the past with the likes of Sam Raimi. As alternatives, here are five projects where The Fountain director and the Snow White and the Huntsman actor could collaborate in the future.

Adrift is Darren Aronofsky’s next project adapted from a short story by The Ring horror author Kôji Suzuki, about a deckhand on a fishing boat who discovers an abandoned yacht with a strange distress call and decides to take it to shore, only to find out why it’s called a “ghost ship.” Jared Leto, who’s worked with the director before in Requiem for a Dream is attached to star and produce, but maybe there’s something else there for Hemsworth, too.

In fact, it wouldn’t be his first horror after the 2011 slasher film The Cabin in the Woods.

As it turns out, Aronofsky wants to make a Black Swan musical. Chris Hemsworth is not the greatest singer, but he can hold a tune. Miley Cyrus once said he sings like Johnny Cash. Perhaps, the Aussie actor could take over Vincent Cassel as diabolical artistic director Thomas Leroy. He’s definitely got the charm, and the character wouldn’t be much of a stretch from his eccentric role in Spiderhead.

The Anomaly is an award-winning novel by Hervé Le Tellier whose rights for a film adaption Aronofsky has “long begged the universe to grant” him. It’s a trippy thriller about doppelgangers, identity, and simulated realities that Aronofsky would certainly turn into a deeply interesting and thought-provoking film. As an ensemble cast book, there are a number of characters Hemsworth would be a great fit for.

Originally written by Black Swan screenwriter Mark Heyman, XOXO is currently in development, with Aronofsky serving as producer. It is set to be directed and rewritten by Clement Virgo, and according to Mubi, it’s expected to release in 2023. It’s a crime mystery about an engaged man who falls for a woman online, which ends up having deadly consequences. Like in Limitless, Hemsworth, and Aronofsky would meet again in the roles of actor and producer.

A Guys and Dolls remake has been in development for a while now. Bill Condon was attached to direct in 2021, but if Aronofsky indeed has his eyes on a musical project, this could be it. The director would certainly offer a bizarre and intriguing vision to the classic story, in the veins of Terry Gilliam’s Brazil, or Martin Scorsese’s New York, New York. Can you imagine Hemsworth as high-roller Sky Masterson, once played by the great Marlon Brando?

Any of these projects could land the Thor actor his first nomination for a prestigious award like a Golden Globe, or even an Academy Award. He’s proven that he has the acting chops to deliver a memorable performance, and a partnership with a director/visionary like Darren Aronofsky could be what finally does the trick to redirect his career, going into this new post-Marvel phase.