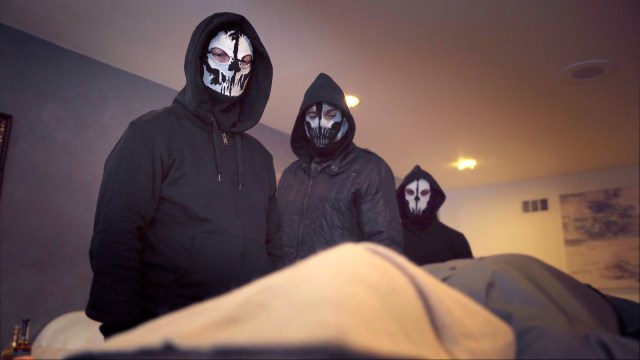 More than any other genre, horror loves to capitalize on a formula that’s proven successful for someone or something else, with these trends, fads, and bandwagons inevitably being run into the ground. Given that The Purge franchise has spawned five feature films and a TV show, generating over $500 million at the box office in the process, it was only a matter of time before something like Evil at the Door came along.

While writer, director, and star Kipp Tribble (who has a phenomenal name, it must be said) didn’t lift the premise wholesale, there are enough similarities to raise a suspicious eyebrow or two. The story revolves around a shady cabal known as The Locusts, who’ve existed in the shadows for close to a century.

On one night of the year, the elders allow their members to engage in the annual tradition known as The Night of the Locusts, where they’re allocated a home to break into, and 180 minutes to do whatever they want with the abode and its occupants. If that sounds like The Purge on a much smaller scale, then you aren’t the only person to have had that thought.

That hasn’t prevented horror enthusiasts from seeking out the familiar, though, with Evil at the Door landing a plum spot on the iTunes global most-watched chart, as per FlixPatrol. However, a measly 2.5/10 rating on IMDb shows that even diehard fans of blood, guts, and familiar conceits were left equal parts underwhelmed and baffled by what they’d just seen.