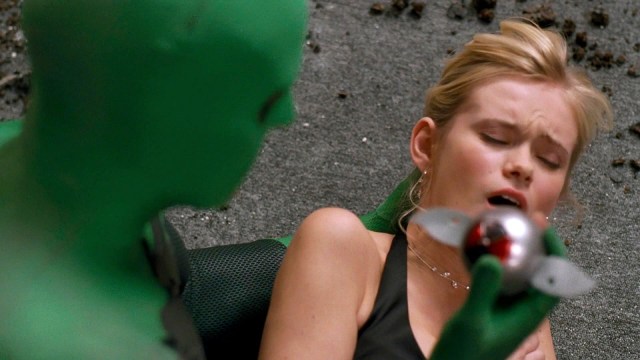 As the single most popular and consistently bankable genre in the industry, the superhero movie has taken many shapes and forms since the boom really kicked off at the turn of the millennium. We’ve seen all-time greats and legendary disasters, and while it’s arguably not the worst tale of costumed crimefighting that’s ever been made, 2008’s Superhero Movie definitely dwells somewhere near the bottom of the pile.

Part of the short-lived craze for spoofing anything and everything that was even remotely popular at the time, the panned picture was at least of a similar quality to the Scary Movie sequels, Date Movie, Epic Movie, Meet the Spartans, and all the rest of the awful attempts at substituting rapid-fire pop culture references for genuine humor that dragged Hollywood comedy down to its lowest ebb.

Drake Bell’s Rick Riker gets bitten by a genetically-enhanced insect, and thus becomes The Dragonfly. Using his powers for good, he ends up being pitted against Christopher McDonald’s The Hourglass, who seeks immortality. Along the way, actors playing Stephen Hawking, Nelson Mandela, the Dalai Lama, Tom Cruise, Tony Bennett, and various established comic book characters show up, and absolutely none of it manages to raise so much as a smile.

Inexplicably, though, Superhero Movie managed to almost double its $35 million budget in box office takings, despite reviews that could kindly be described as disparaging. Even more shocking, it’s managed to hoodwink streaming subscribers into giving it a second chance, with FlixPatrol revealing the black mark against the good name of superhero cinema has become one of the most-watched titles on iTunes’ global charts this week.

Superheroes and comedy can work (and work well) if handled with any sort of class, but this ain’t one of those times.