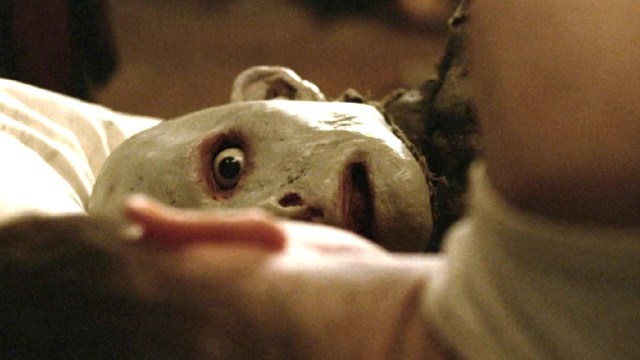 via Dark Sky Film
Review of:

We’re currently living through a new Golden Age for horror, with countless critically acclaimed and widely inventive tales of terror spooking critics and audiences all over the world. One of the very few downsides is that the sheer volume of top-tier frightening content allows too many gems to fall through the cracks, a category 2018’s Possum firmly falls into.

Written and directed by Matthew Holness, the nerve-shredding favorite holds a Certified Fresh Rotten Tomatoes score of 90 percent, and won several awards on the horror festival circuit. Despite such adulation, though, a limited theatrical release yielded only $33,000 at the box office, while it didn’t make much of a splash on-demand.

That’s definitely not the fate it deserved, with Possum‘s psychological stylings, relentlessly dark narrative, and unyielding commitment to making your skin crawl rendering it so criminally under-seen that it arguably hasn’t even cultivated cult classic status as of yet. Thankfully, a recent Reddit thread that’s been gaining steam is seeking to rectify that in short order.

The always-reliable and wonderfully creepy Sean Harris gives a dead-eyed but still fully-realized performance as a disgraced children’s puppeteer who retreats to his childhood home. Once there, he’s forced to deal with his stepfather and reckon with the sins of his past, present, and future, all while being pointed to as the prime suspect in the disappearance of a young boy.

It’s fairly bleak stuff, and there are evident real-world inspirations behind the main thrust of the story for those familiar with certain British TV personalities and their sordid histories, with the old-fashioned chamber piece putting a horrific spin on the twisted family drama.