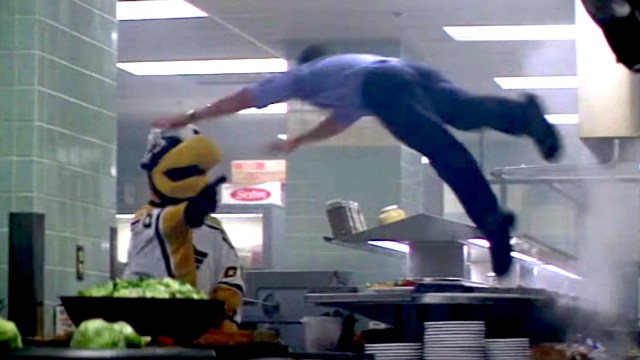 Not many movies go on to launch an entire subgenre, never mind an actioner, but the legacy of Die Hard is still being felt to this day. Things were a lot worse in the 1990s, when the basic formula of “one man in a single location facing insurmountable odds” was at saturation point, but it did allow for wondrously cheesy gems like Sudden Death to emerge.

Whether you prefer your Die Hard clones to take place on a bus (Speed), an airplane (Passenger 57), a boat (Speed 2, Under Siege), a train (Under Siege 2), on a mountain (Cliffhanger), on Alcatraz (The Rock), on a prison transport (Con Air), or anywhere else that takes your fancy, there’s guaranteed to be a structure or mode of transport to scratch that itch.

In the case of Sudden Death, Jean-Claude Van Damme’s Darren McCord finds himself roundhouse kicking bad guys at a sports arena, with Powers Booth’s crooked ex-CIA man holding the vice president hostage in a VIP box. Needless to say, he’s got plans to blow up the building if his ransom demands aren’t met, and wouldn’t you know it; only one man can stop him.

Re-teaming with his Timecop director Peter Hyams was a smart move on JCVD’s part, with Sudden Death comfortably ranking among the upper echelon when it comes to the Muscles from Brussels’ filmography. Netflix subscribers are in agreement, too, with the action-packed escapade having landed on the global watch-list this week, per FlixPatrol.

Avoid if you’re lactose intolerant, though, but for everyone else there’s plenty of glorious cheese to gorge on.