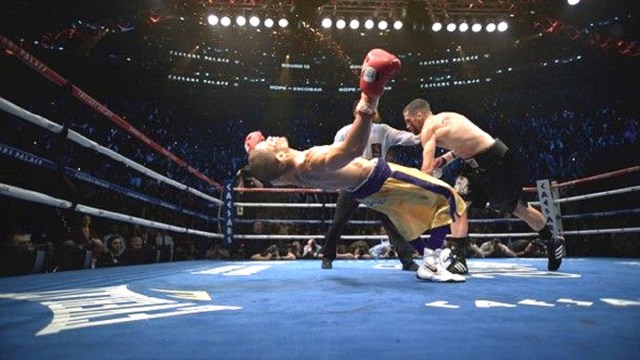 via TWC
Review of:

The sports movie has its own set of rules, regulations, tropes, trappings, and cliches, which makes it harder for any project to come along with a brand new perspective. Southpaw definitely isn’t that film, but it’s a damned good slice of formulaic entertainment that deserves to be held in much higher esteem than it is.

The best examples of the boxing genre tend to find either widespread critical acclaim, awards season recognition, or bumper box office returns. By virtue of a $94 million haul from theaters on a $30 million budget, a 60 percent Rotten Tomatoes score that puts it just on the right side of the Fresh threshold, and barely a nomination in sight, Antoine Fuqua’s drama doesn’t fit the bill.

However, thanks largely in part to a fiercely committed and intensely shredded Jake Gyllenhaal, Southpaw both embraces and subverts everything audiences have come to know and love about a narrative throughline that was damn near perfected by Rocky all the way back in 1976.

Seven years after its initial release, and Southpaw is refusing to hit the canvas on Netflix, having roared back into life to become one of the platform’s most popular titles. As per FlixPatrol, it currently ranks as the ninth top-viewed feature on the global rankings, and it could yet show the legs to fly even higher.

Gyllenhaal’s Billy Hope hits rock bottom following a personal tragedy, losing absolutely everything he ever held dear. Sure enough, an inspiring comeback complete with montages is eventually on the cards, forcing him to reckon with his past, present, and future to put it all on the line by stepping back into the ring.