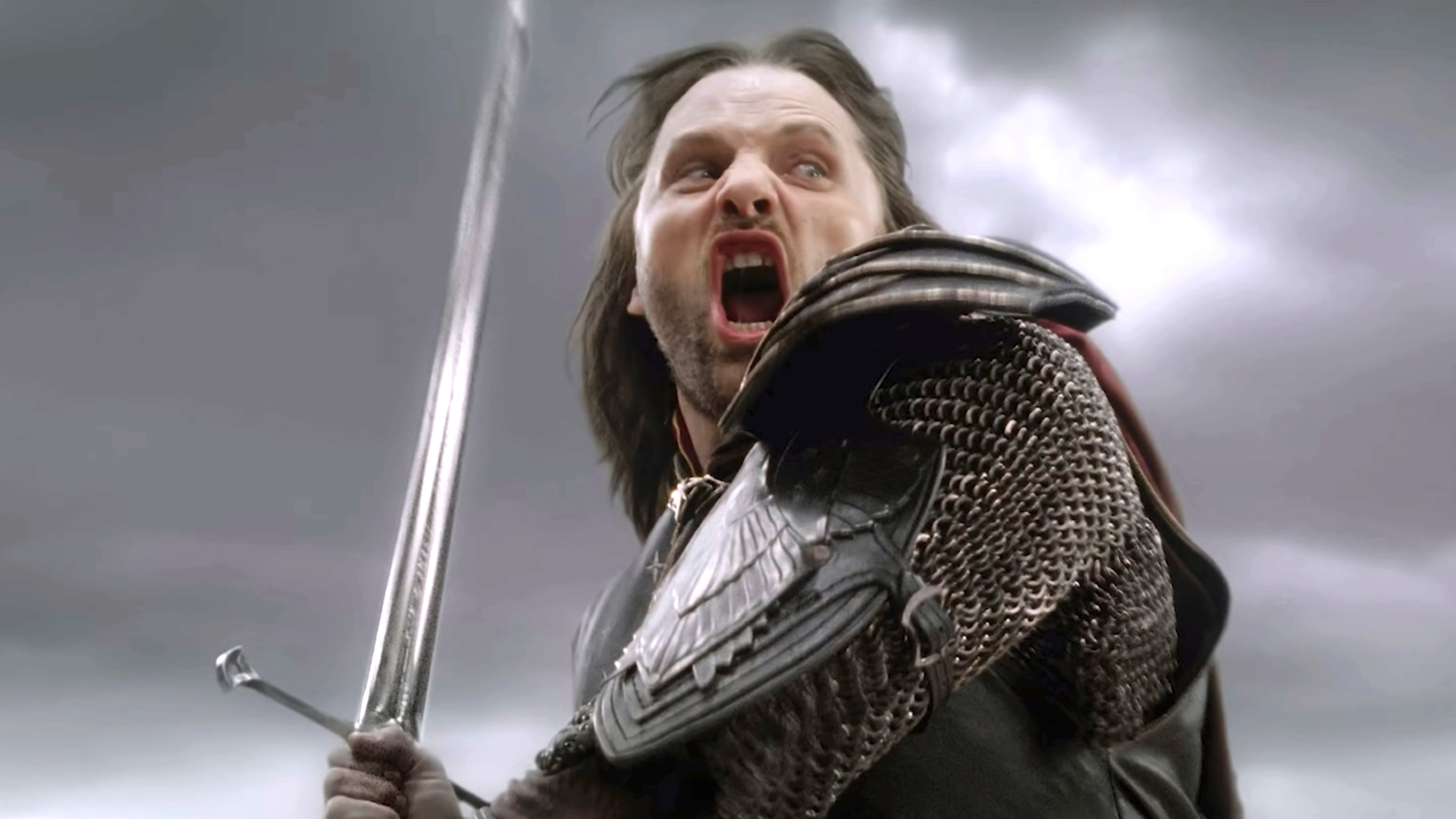 More than two decades after the first Lord of the Rings film arrived in theaters, the fanbase behind the mega-popular franchise remains unyieldingly loyal to their favorite fellowship.

Hardcore fans of the franchise have memorized each character’s name and backstory, and many spent years educating themselves on the rich lore and intricate history behind J.R.R Tolkien’s incredible world. Once they’ve studied up on the lengthy Elven histories and complex Dwarven traditions, viewers can shift focus to the vitally important weapons littered throughout the beloved franchise.

Many of the weapons that appear in the books and films are vital to the storyline in Lord of the Rings, with many of them boasting immense power and crucial historical significance. Cherry-picked from the multitude of incredible weapons masterminded by Tolkien himself, here are the most impressive swords in Lord of the Rings, ranked from least to most powerful.

A set of blades obtained by the Hobbits during their stint in the Barrows, these weapons aren’t the sturdiest, but they are powerful. Frodo’s blade breaks when he faces off against the Witch King on Weathertop, but the remaining Hobbits — namely Merry — hold onto theirs for some time. It is his Barrow-blade that Merry uses to wound the Witch King during the Battle of the Pelennor Fields, an act that is successful largely because these weapons were created specifically to harm the Witch-king of Angmar. It did its job well, and ultimately gave Eowen the time she needed to kill the ancient wraith.

One of the weapons wielded by the aforementioned Witch King, the Morgul blade is all but guaranteed to deliver a fatal blow. Despite its small size — it’s technically a dagger more than a sword — the Morgul blade is designed to deliver a devastating wound every time. The tip of the knife is designed to break off inside the wound, slowly working its way toward its victim’s heart. Once it reaches its destination, it permanently transforms its unfortunate casualty into a wraith.

Thorin Oakenshield’s famed blade has a long history, but fans were first introduced to it when the Dwarven King stumbled across Orcrist in a troll cave. Also known as the “Goblin-cleaver,” this Elven-made weapon is a mate to Glamdring, the blade wielded by Gandalf. Like Sting and Glamdring, it glows when Orcs or Goblins are near, and quickly gained a reputation for its deadly bite. Long before Thorin used Orcrist to slash his way out of Goblin-town, this blade had a reputation for mowing down enemies. It was a vital tool during the Goblin Wars, earning the blade its bloody reputation.

The Witch King of Angmar’s intimidating blade doesn’t have a given name in the Lord of the Rings books, but it is generally referred to as the “Pale Blade” by fans of the franchise. It’s not frequently used in the Lord of the Rings films — instead, it’s often replaced by the smaller Morgul blade or the much larger flail he wields against Théoden and Eowen. The blade, described as a “wicked sword of cursed steel,” is a devastatingly powerful weapon, wreathed in sinister magics and capable of defeating even the mightiest of heroes.

One of Lord of the Rings’ most famous swords, Sting was wielded first by Bilbo Baggins, and then later by his nephew, Frodo. The blade was discovered in a troll’s cave alongside Orcrist and Glamdring, its fellow Gondolin blades, and shares a vital trait with its Elven-made mates. Each of the blades shines when Orcs or Goblins are near, but only Sting glows blue in warning. The unique weapon — closer to a dagger than a true sword in the hands of anyone but a Hobbit — served Bilbo well during his journeys, and later did the same for Frodo. It is capable of wounding powerful Ungoliant descendants like Shelob, and strikes fear into the hearts of Middle Earth’s dark beings.

Long before it was remade and wielded by Aragorn, this mighty longsword went by a different name. Dubbed Narsil long before its name was changed to Andúril, the mighty blade once wielded by the High King of the Dúnedain played a key role in the final, massive battle between the Last Alliance and Mordor. Even after it was broken, Narsil contained the power necessary to cut the One Ring from Sauron’s finger, ending the war and — temporarily, at least — purging his dark presence from the land.

This impressive sword was forged in the First Age for the Elven King of Gondolin, only to eventually fall into the hands of everyone’s favorite wizard. Glamdring — also called the Foe-hammer and Beater — was discovered alongside Sting and Orcrist in an Eriadorian cave, and shares several old Elven traits with the other two weapons, like the ability to detect nearby danger from Orcs or Goblins. Unlike Sting, this mighty blade glows white when danger is close, and is capable of standing up to immense power. It is strong enough to pierce the Balrog’s flesh when it faces off against Gandalf, and can channel massive amounts of lightning. It is Gandalf’s primary weapon through all of the Lord of the Rings series — apart from his staff, of course — and serves the sage wizard well.

A weapon that most Lord of the Rings fans are likely unfamiliar with, Gurthang was around long before the story told in the films took place. The sword belonged to Túrin Turambar, a tragic hero from the First Age that fans of Tolkien’s extended lore will remember well. Gurthang was reforged from Anglachel, a blade forged by an ancient Dark Elf. It is one of the most visually interesting Lord of the Rings swords, with a black blade and edges that shine with “pale fire,” and has an impressive history. Gurthang was the blade behind the slaying of the Father of Dragons, Glaurung, securing for it the enviable title of “Iron of Death.”

An Elvish sword with immense power, Ringil was long ago borne by Fingolfin, a character that is yet to be seen in mainstream Lord of the Rings media — but may appear via flashbacks in the upcoming Rings of Power series. It was wielded with immense efficacy in a battle against the near-insurmountable Morgoth in a duel between Fingolfin and the original Dark Lord. While Fingolfin did eventually fall to Morgoth’s might, he first managed to wound the powerful Ainur a full seven times. With his powerful sword in hand, he even managed to permanently lame Manwë’s fearsome brother, using his last ounce of strength to rend his foot and leave a permanent mark on his near-immortal body.

The most powerful sword in all of Lord of the Rings lore is Andúril, by this author’s estimation. The blade itself may not have the sparkle of blades like Glamdring or Sting, but its power — both in combat and in influence — is far-reaching. Reforged from the broken pieces of Narsil, Andúril builds immensely on the strength of its already powerful previous form.

Nicknamed the Flame of the West, Andúril is key to Aragorn’s reestablishment of various alliances throughout Middle Earth. It proves his heritage and, at a key moment in the war, is the singular force behind Aragorn’s recruitment of the long-dead residents of the Paths of the Dead. The undead army he leads into battle ultimately turns the tide of the Battle of Pelargir, helping Aragorn and company to secure a final, definitive, victory.