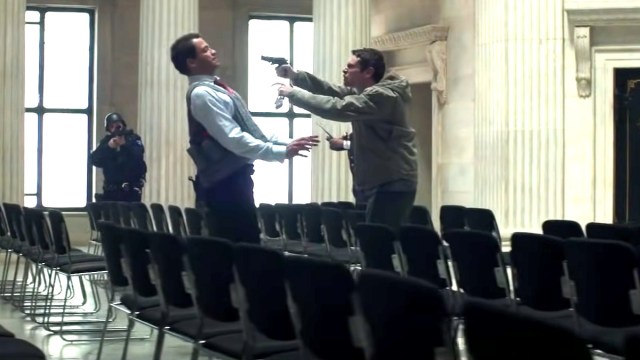 If you weren’t aware that the movie was a high concept crime thriller designed to unfold in real-time, then you’d be forgiven for thinking Money Monster was an awards-baiting prestige picture, an initial reaction that wouldn’t be too wide of the mark looking at the talent involved, even if the end product didn’t quite live up to the buzz.

Two-time Academy Award winner Jodie Foster was behind the camera to direct the propulsive story of BAFTA winner Jack O’Connell’s furious investor, who storms the set of the titular TV series hosted by two-time Oscar victor George Clooney’s so-called financial guru. Taking the set hostage, the unplanned invader lost everything on an errant tip, and threatens to blow him up with an explosive vest.

As the situation intensifies, Clooney’s Lee Gates manages to communicate to his longtime producer in an effort to try and diffuse the potentially deadly situation, who is of course played by an Oscar winner in Julia Roberts. Oh, and five-time Golden Globe nominee Catriona Balfe, five-time Emmy nominee Giancarlo Esposito, and two-time Golden Globe nominee Dominic West are among the supporting cast.

That’s a huge array of talent, which only made it all the more disappointing to discover that Money Monster failed to live up to its potential, as evidenced by a Rotten Tomatoes score just below the 60 percent Fresh threshold. Not that customers of Amazon-supported platform Freevee have an issue checking it out, though, with the fast-paced financial fantasy currently one of the most-watched titles on the platform, per FlixPatrol.