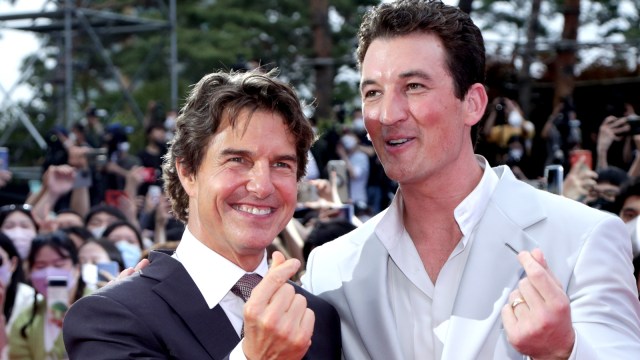 The name Joseph Kosinski might not be top of mind just yet, but the director’s run in 2022 could land him there soon.

With dual projects released right around the same time — Top Gun: Maverick in theaters, and Spiderhead streaming on Netflix (probably to the horror of Tom Cruise) — Kosinski is making a mark for himself rather quickly.

Speaking of making a mark, the director and his crew snuck a couple of Easter eggs into Spiderhead, which released just after Top Gun: Maverick.

In a normal world (when has that ever been the case?) the dropping of Easter eggs wouldn’t have been possible, as Top Gun: Maverick was slated to come out a while ago but was pushed back due to the COVID-19 pandemic – and Cruise’s insistence on it being a theater-going experience.

Top Gun: Maverick hit the theaters on May 27 in the USA, while Spiderhead was released on Netflix just a few weeks later, on June 17.

The fact that Kosinski only has five films to his name, starting with another movie sequel with a colon in it — Tron: Legacy — to have 40% of his films release in one year — within one month of each other — is something quite unique.

That’s not all the two movies have in common, though.

Actor Miles Teller plays a prominent role in both features, while fellow actor Charles Parnell also appears in both films. In fact, it’s the third-straight Kosinski project with Teller in it.

Claudio Miranda is on board as the cinematographer for each movie as well.

And from there, the similarities start to get thinner, as Cruise-led Top Gun: Maverick has already amassed more than $1 billion at the box office and has been a critical hit and fan-favorite alike.

Meanwhile, Spiderhead, with Chris Hemsworth as the main star along with Teller and Jurnee Smollett, has received mixed reviews and features some pretty awkward and cringey scenes in the opposite manner of the cringe we get in Top Gun: Maverick, although both do stem from sex.

Naturally, as they were making Spiderhead, some of the team decided it would be a blast to drop very tiny, extremely easy to miss Easter eggs related to Top Gun: Maverick.

If you weren’t aware of the director’s ties to both movies, or even weren’t on hyper alert, there’s almost no way you would have caught the little eggs in Spiderhead. Netflix itself released an interview with Kosinski recently in which they point out the Easter eggs as well.

In Spiderhead, Teller plays Jeff, an inmate who is wrecked from a drunk driving crash that killed his best friend. He is administered some drugs by Hemsworth’s Steve Abnesti that drive him to do some of the deeds shown above, and things start to spiral from there.

In one of the early scenes of Spiderhead, Teller gives homage to an original Top Gun character who returns for the sequel – Val Kilmer’s Tom Kasansky or better known as “Iceman” in the two movies.

Teller’s Jeff calls himself “ice cold” which is the same way that Kilmer’s Iceman is described in the original film by Nick Bradshaw aka Goose (Anthony Edwards), who says it’s Iceman’s flying style that got him the moniker, saying “It’s the way he flies. Ice cold, no mistakes.”

It was two writers for Spiderhead, Rhett Reese and Paul Wernick, having some fun in sneaking the line into the movie, according to Kosinski.

Back to Jeff’s bedroom in the opening scene of the movie, where Kosinski is the one responsible for this little nugget.

In Top Gun: Maverick, Teller plays Bradley Bradshaw who, of course, has a stellar nickname in line with the rest of the Top Gun favorites. But it’s not just any nickname, it’s Rooster — as his father is Goose — who died in the original film, and even in the original his son is briefly portrayed but not credited.

On Jeff’s desk in Spiderhead, way in the back and nearly out of sight, sits a model airplane, but not just any ole plane, an exact replica of Rooster’s F-18 from Top Gun: Maverick.

Even though the two movies came out so close together, Teller was cast as Rooster all the way back in July 2018, before Spiderhead was even announced as an adaptation.

Teller joined the cast of Spiderhead in September 2020, more than a year after filming for his role in Top Gun: Maverick had ended — in June 2019 — so you might notice that he doesn’t look exactly the same in the two movies despite the release dates.

There are more Easter eggs throughout the movie that don’t pertain to Top Gun: Maverick as well, including a nod to The Shining as well as an inmate reading the story from the exact book the movie is based on — George Saunders’ collection of short stories titled Tenth of December — which contains the story “Escape From Spiderhead”.

You can catch the two Easter eggs mentioned regarding Top Gun: Maverick, plus plenty more about Kosinski’s inspirations and adulations for his films in the vignette by Netflix below.