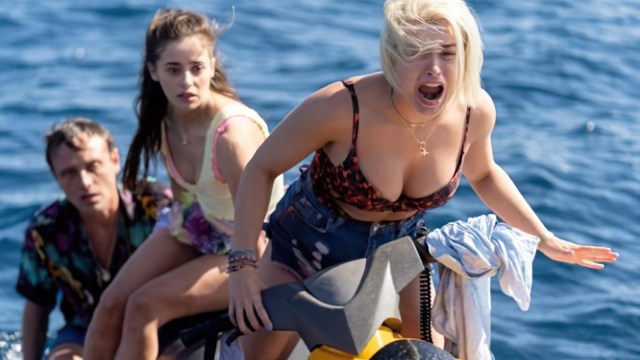 Each and every year, a handful of giant shark attack movies arrive like clockwork, virtually every single one of which adheres to the strict rules and regulations set forth almost half a century ago in Steven Spielberg’s Jaws, including titles that double as summaries of the entire picture from start to finish.

The latest effort to make waves on streaming focuses on a typically youthful and attractive gaggle of disposal characters, who hijack a couple of jetskis and take them out to the deepest reaches of the sea for nothing more than sh*t and giggles, but a brutal collision leaves one of their number severely injured. Bait, if you will. For sharks. The title? Yep, it’s Shark Bait.

Hardly the worst the reliable subgenre has put forward in recent times, the fact it’s managed to secure a Top 10 spot on the iTunes charts in multiple countries around the world (per FlixPatrol) is a remarkable accomplishment for a flick that evidently didn’t have much to work with in the way of budget, especially one that occupies a space swamped by similar titles that range from vastly superior to laughably inferior.

You will definitely have seen better shark attack efforts than this one, but that doesn’t mean it’s the worst, either. Shark Bait delivers exactly what you’d expect from a project bearing such an obvious-yet-fitting label, so at the very least it isn’t going to leave anyone disappointed in what they find. It’s almost Shark Week, so it might even find an even bigger crowd towards the end of the month.