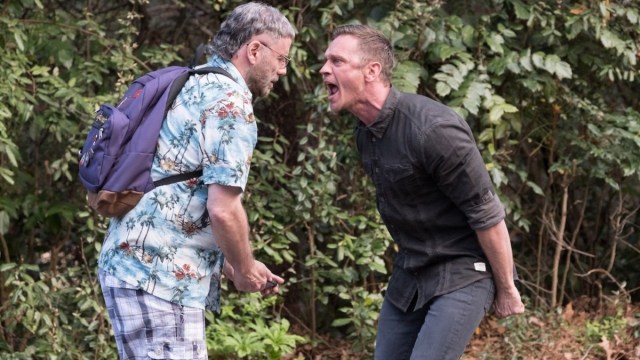 Nobody was expecting cinematic excellence from The Fanatic, which saw slumming former A-lister John Travolta sign up for another low-rent action thriller, with the added curiosity factor of Limp Bizkit frontman Fred Durst co-writing the script and directing.

The only memorable thing about the movie is Travolta’s astonishingly terrible wig, which we completely understand was a deliberate stylistic choice, albeit one so attention-grabbing that it managed to steal the attention away from what was otherwise a shoddy psychological thriller that could only rustle up a 15 percent Rotten Tomatoes score.

Travolta’s Moose is obsessed with Devon Sawa’s action hero Hunter Dunbar, so much so that he takes a missed opportunity to meet his idol extremely personally. Making a habit of lurking outside the actor’s home, thing quickly begin to take a turn for the dangerous as an unhealthy adoration evolves into something a great deal more sinister.

In spite of being roundly panned by critics and audiences alike, though, The Fanatic has set up shop on streaming to lurk outside the door of our collective consciousness once more. As per FlixPatrol, the undercooked genre flick has emerged from the shadows to terrorize the global watch-list on Starz, three years on from an initial release that yielded the mighty total of roughly $3000 at the box office. And no, that’s not a typo.

The Travolta/Durst team-up nobody was asking for delivered exactly what everyone was expecting it to, but our unhealthy obsession with all things unsettling has managed to give The Fanatic a new lease of life.