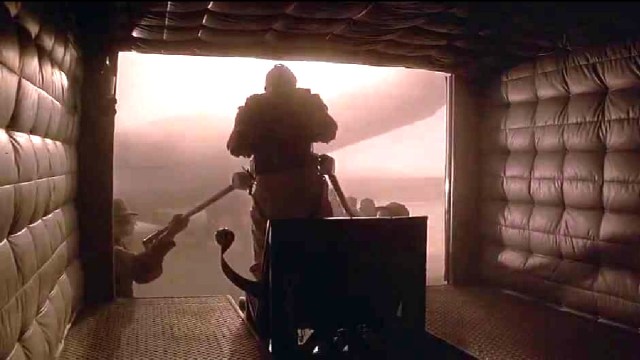 Anyone who even dares to doubt Nicolas Cage’s credentials as one of the modern era’s greatest action heroes only needs to look at the fact he headlined three certified classics in the space of a year. Not a lot of A-listers star in a trio awesome actioners in their entire careers, so hopefully the actor’s agent got a huge raise after landing him The Rock, Con Air, and Face/Off in quick succession.

Of the three, it was Simon West’s airborne actioner that fared the worst from a critical and commercial perspective, which seems a little unfair. Then again, $224 million at the box office wasn’t a bad return for an off-kilter extravaganza that focused its energy on eccentric supporting characters just as much as the explosive set pieces.

A 56 percent Rotten Tomatoes score is borderline sacrilegious, though, when Con Air is undoubtedly one of the most purely enjoyable and dementedly entertaining studio blockbusters to emerge from a decade that was pretty much packed wall-to-wall with action greatness. A quarter of a century may have elapsed, but streaming subscribers still haven’t grown tired of watching Cage’s Cameron Poe demand that the bunny get put back in the box.

As per FlixPatrol, Con Air has been soaring to new heights on streaming, having broken free from its shackles to nab a place on the iTunes most-watched list. There was definite franchise potential in the premise, but unless West finally gets around to making that sequel set in outer space that anyone in their right mind would love to see, we’ll have to make do with a one-and-done.