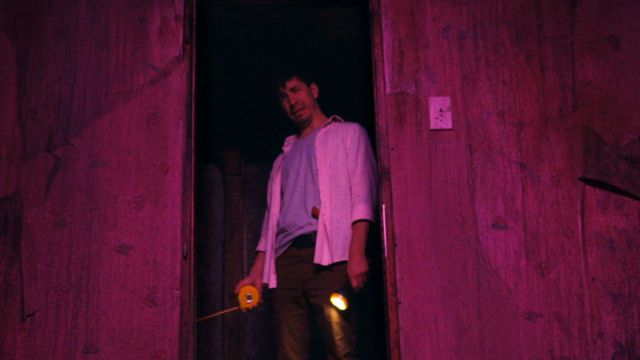 Barbarian was confronting enough in its final cut, but it could’ve been a whole lot worse according to Justin Long who has dished out the dirt on a scene too disgusting to make it.

Long is perfectly cast yet again in Barbarian as just the worst bloke alive, with him so utterly unlikable it feels like Long thrives on doing it. The victim of some of the most horrendous and disgusting moments in the film nearly had much worse. Yes, much worse than adult breastfeeding with an inbred naked super solider.

During an interview with Vulture on the film’s successes and other spoilery topics, he revealed a much more disgusting moment from the script thankfully didn’t make it to the final version. During the scene where Mother attempts to breastfeed him and he refuses, she originally would take a rat, bite off its head, and then regurgitate it into Long’s mouth.

Director Zach Cregger however ended up going against using it, believing it to be too disgusting to be featured. Bad news for rat decapitation fans, we know how hard done by you are.

“There was a moment after that where Mother, because I wouldn’t latch to her breast, she takes a rat – it’s scurrying by – and bites its head off and masticates it and baby-birds it into my mouth. Which was in the script, and I knew it was gonna happen,” Long explains. “And we shot it right after we shot the breastfeeding scene. Zach cut that out. He felt like it was a bridge too far gross-wise.”

Barbarian has been part of a great year in horror, particularly original new properties. With excellent performances across the board and an excellent sense of dread, it could be arguably the best of the year. The good news is the positive word of mouth translated to a strong box office return as well, as it grossed $45 million from a budget a tenth of the size.

Naked old people have also had a stellar few years in horror, with genre enthusiasts recently picking up on the strange new trend in 2010s and 2020s horror.

Barbarian is available to stream on HBO Max.