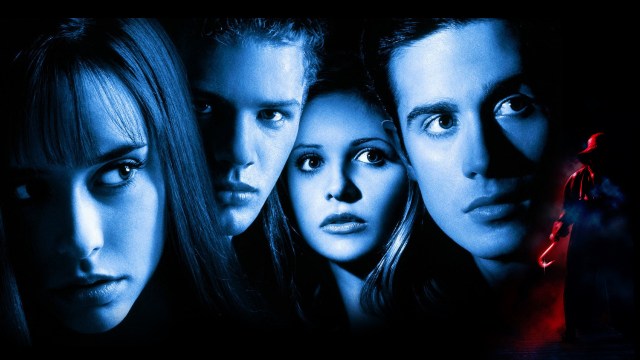 Every decade has its subgenre of horror films that particularly define that period’s contribution to spooky cinema. The monster movies of the 1940s, for example, or the bloodthirsty slashers of the 1980s. When it comes to the 1990s, the name of the game was definitely teen horror, as Hollywood realized that the way to reignite the dwindling genre was to cultivate a whole new generation of fans.

The teen horror craze mostly took off in the second half of the decade, due to the enormous success of a certain ground-breaking flick that we will be getting to shortly. And, while many entries in this wave might not have stood the test of time, a range of them are still hugely entertaining to this day, especially for those with a fondness for the era that gave us Friends, Furbies, and questionable fashion choices.

With Halloween upon us, now’s the time to take a look at the top 10 teen horror movies of the 1990s. Commiserations to two outstanding examples of the genre, Final Destination and Ginger Snaps, which just missed out on eligibility due to being released in 2000.

Let’s kick off our rundown with an unfairly underrated offspring of the ’90s teen horror trend. Starring a pre-X-Men James Marsden and Katie Holmes (who got her big break on Dawson’s Creek the same year), 1998’s Disturbing Behavior offers a high school twist on The Stepford Wives storyline, as the unruly adolescent population of a picturesque town is eerily becoming conformist and well-behaved. Ignore the bad reviews and give this one a go for yourself.

In between dancing with Christina Ricci in Casper and dancing with Death in Final Destination, Devon Sawa starred in the black comedy horror Idle Hands as a lazy stoner whose right hand develops a murderous mind of its own. Sawa is joined by other up-and-coming stars, like Seth Green and Jessica Alba, in a movie whose slacker comedy sense of humor allows it to stand out from the crowd of Scream wannabes that proliferated the scene in the late ’90s.

Its two weak-tea sequels might not be worth it, but the first Urban Legend deserves a revisit from any Scream fans looking for another ’90s slasher classic. Featuring a cast combining then-young stars like Jared Leto and Rebecca Gayheart with horror legends like Robert Englund and Brad Dourif, the film focuses on a series of grisly murders occurring at a New England university that seem drawn from, you guessed it, urban legends. An enjoyable, if not entirely legendary, yarn.

The Halloween franchise got a much-needed jolt in the arm with 1998’s 20th anniversary flick Halloween H20, which brought back Jamie Lee Curtis as Laurie Strode for the first time since 1981. With a young cast led by ’90s heartthrob Josh Hartnett and a script from Scream‘s Kevin Williamson, H20 is extremely of its time, but Curtis is terrific as an older, more nuanced Laurie and her final, victorious showdown with The Shape is one of the franchise’s best endings.

Scream 2 obviously isn’t quite as good as the original, but it’s still a ton of fun. Unlike so many horror follow-ups before it, Wes Craven’s meta-slasher sequel manages to keep up both the suspense and the surprises, featuring some standout kills and tense set pieces ⁠— like the scene when Sidney has to climb over Ghostface’s lap to get out of a crashed car. Despite the three (and soon-to-be four) additional movies that have followed, Scream 2 arguably remains the finest Scream sequel.

To be clear, Robert Rodriguez’s The Faculty is not among the director’s absolute best films, but its sheer entertainment value is undeniable. A shameless send-up of Invasion of the Body Snatchers, Elijah Wood and his band of various high school archetypes must save the planet after their A-list assortment of teachers (including Robert Patrick, Famke Janssen, and a wasted Salma Hayek) are taken over by aliens. Check out your own brain at the door and just enjoy the ride.

The Craft is the ultimate teen witch story, combining themes of sisterhood and female friendship with twisted deaths and dark developments. The four leads, including Neve Campbell (in her second out of three appearances on this ranking), are all good, but Fairuza Balk undoubtedly steals the show as Nancy Downs, who becomes increasingly unhinged and power-hungry after she and her friends tap into some real occult forces. Just avoid the 2020 follow-up The Craft: Legacy.

When it comes to ’90s teen horrors, though, the only entry almost as iconic as our number one is I Know What You Did Last Summer, which tells the now familiar (thanks to so many knockoffs and spoofs) tale of four teens covering up a hit-and-run, only for their misdeeds to eventually catch up with them. Jennifer Love Hewitt’s Julie James makes for a strong final girl and there’s a decent mystery to this simply plotted yet robust slasher. It’s too bad I Still Know What You Did Last Summer dropped the ball.

Yes, we all knew this was coming. Apologies for being predictable, but there’s just no denying it: Scream is unarguably the greatest teen horror not just of its decade, but of all time. Wes Craven’s masterpiece is famous for almost singlehandedly reinvigorating its genre, thanks to its ingenious acknowledgment and subversion of horror tropes. But while its meta angle is often discussed, let’s not overlook the serious scares on show and the integrity with which it portrays its protagonist, the unbeatable Sidney Prescott. Over 25 years on, and Scream still makes us… well, you know.