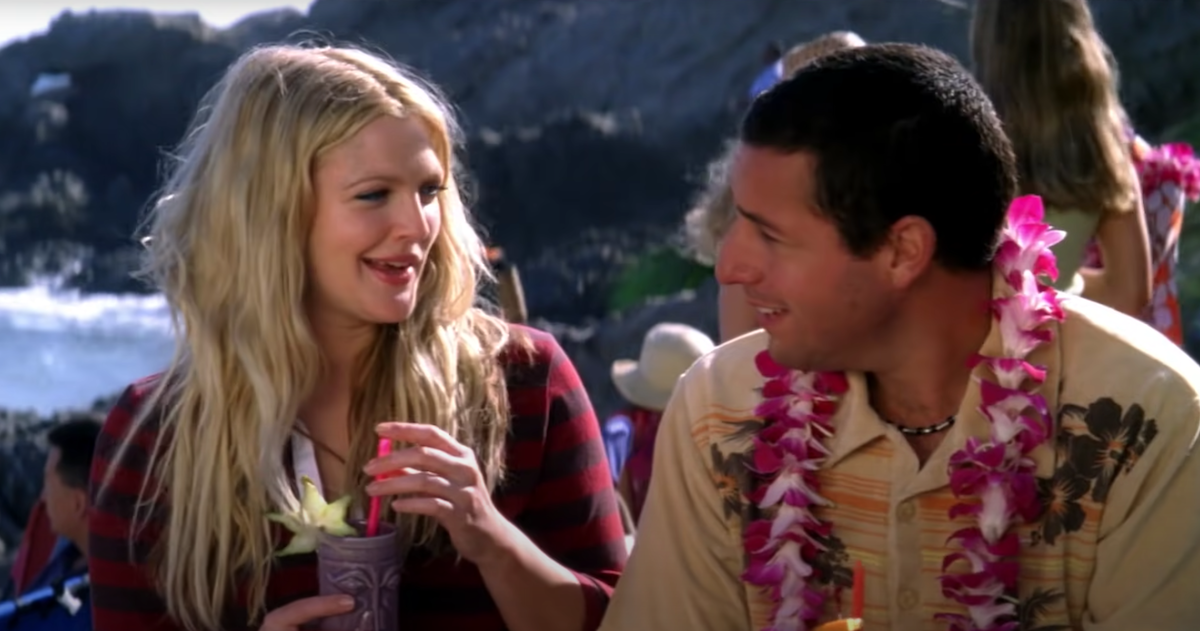 Some, if not most of the best romantic comedies, were made in the nineties and early 2000s. The formula that most of them followed was always a success and they remain entertaining to this day – maybe minus a few insensitive jokes. Many people wish that this genre would come back today as some of the recent rom-coms haven’t been hitting as good as they used to. So, for those who wish to take a trip down memory lane and revisit some of their favorite rom-coms, here’s the list for you.

Adam Sandler has many movies that are seen as iconic, but 50 First Dates takes the cake as his best rom-com. It was his first time working with Drew Barrymore and the plot of the movie was so out of the box that it just so happened to work. This movie follows Henry (Adam Sandler), a marine veterinarian who’s afraid of commitment until he meets Lucy (Drew Barrymore) at a diner. He falls for her immediately, but she’s as stubborn as they come. Eventually, he wears her down and they fall in love, but when it’s revealed that Lucy has a special case of amnesia that makes her forget the past twenty-four hours every day, will they be able to find a way to be together?

There’s no other way to describe this movie except for sweet. Obviously, with it being an Adam Sandler movie, it’s comical too, but the plot is so sweet and seeing Henry do everything he can think of to make Lucy fall back in love with him is something that not too many people would do in real life. Seeing them so in love and so happy for their short periods of time may be the best part of this rom-com.

Just Like Heaven stars Reese Witherspoon and Mark Ruffalo as Elizabeth and David. David moves into a new apartment only to find it is haunted by its previous tenant, Elizabeth, who is in a coma at the hospital she used to work at. Elizabeth and David must learn to live together, even though they have very different ideas of how the apartment should be. When Elizabeth is going to be taken off life support though, David and her ghost must find a way to save her, all while they slowly realize how much they actually enjoy being around each other.

This movie is a great cross between a rom-com and a drama as the premise is dramatic, but the way they tell the story is absolute rom-com gold. From the bickering between David and Elizabeth to the slow-burn romance that surprises the two of them as much as the audience, it’s a winner. However, what really seals the deal is the plot twist ending which you’ll just have to see to believe.

A true classic, Clueless follows Alicia Silverstone as Cher, a regular high school girl in California who is just trying to live the perfect life. Most people see her only as a valley girl due to her looks and personality, but Cher is much more. She’s caring for her father to make sure he stays healthy, she takes a new girl under her wing, and she tries to be as genuine as possible. What she doesn’t realize though, is she can be superficial at times and that can send the wrong message.

Clueless is both a coming of age movie and a rom-com all tied into one in the perfect bow. There’s a lot that happens in Clueless, and sure, some choices weren’t the best (looking at you Paul Rudd), but overall the movie is funny, sweet and exactly what any rom-com aspires to be: iconic.

A lesser-known romantic comedy is Definitely, Maybe, which stars Ryan Reynolds as a single dad to Abigail Breslin’s Maya. Maya is curious about how he and her mother met, and instead of outright telling her, he decides to make it a fun guessing game. He goes through multiple stories featuring three women: Rachel Weisz, Elizabeth Banks, and Isla Fisher. This is done in a way that not only keeps Maya guessing, but also the audience as we watch all of the wacky fun from his past life ensue and try to guess who is Maya’s mother.

It’s a different take on your usual rom-com, and maybe that’s what makes it so entertaining. It keeps your attention at every moment as you try to pick up on clues about who the mother is and who he fell in love with. The director, Adam Brooks, did a great job at not letting the reveal happen until the very end. It’s both sentimental and memorable, making it a great rom-com.

Another iconic movie is Love, Actually, which some actually consider to be a Christmas movie because of the time it takes place. While that can be true, at its core, Love, Actually is a romantic comedy featuring some of Hollywood’s biggest names to date: Keira Knightley, Hugh Grant, and Liam Neeson, to name a few. It follows multiple blooming love stories as well as some heartbreaking tales, but all in all it’s still a great rom-com.

There are moments of happiness, sadness, comedy, and drama sprinkled throughout this wonderful movie. It’s something you can watch over and over again, looking for something new every time, which is always a good sign. It manages to stay relevant even today, nearly twenty years after its release, which is incredibly hard to manage.

If we’re talking about a girl power rom-com, John Tucker Must Die is top-tier. It follows a group of three girls who were all cheated on by the same guy, John Tucker, and hatch a scheme to take the new girl at school under their wing and fix her up so John will date and fall in love with her, only, of course, they end up really falling for each other. In the end, things get fixed and she ends up dating none other than his little brother, but everyone is forgiven and John Tucker remains a playboy.

This one may be a little more comedy than romance, but all things considered it still fits in the category. We get to see pranks played by icons of the time including Brittany Snow, Arielle Kebbel, Sophia Bush, and Ashanti, as well as Jesse Metcalf in a thong in one of the most iconic scenes. It combines romance, female friendship, and comedy all into one and makes a masterpiece of it.

The classic fairy tale turned into a modern day love story was truly iconic. Since A Cinderella Story was released, they’ve made multiple sequels and spinoffs, but the original remains untouched. Hillary Duff as Sam and Jennifer Coolidge as her wicked stepmother is a dynamic that can’t be replicated, not to mention 2000’s legend Chad Michael-Murray as the Prince Charming character. The casting was amazing and so was the drama.

This movie had girls thinking they were going to meet their own Prince Charming via a chatroom like Sam did, it defined a generation. Most people have seen the film and enjoyed the comedy of it, but some of the best parts are Sam’s debut at the school ball and her monologue right before the football game. She’s a great leading character and really pulls the story together.

‘Thirty, Flirty and thriving.” Those three words have stuck with us since the release of 13 Going on 30 in 2004. Starring Jennifer Garner as Jenna Rink, this movie is about how precious time is and how you shouldn’t rush it. At age thirteen, on her birthday, thirteen-year-old Jenna makes a wish to be ‘thirty, flirty and thriving’, after the mean girls ruin her party. When she wakes up, she finds herself living as a thirty-year-old woman. Immediately she goes to find her friend Matty (Mark Ruffalo) to help her go back to being thirteen, but he’s about to get married and says they’re no longer friends. Through missteps and an adventure as a thirteen- year-old in a thirty-year-old woman’s body, Jenna learns what, and who, is really important.

This movie, while a rom-com, also teaches us a valuable lesson in not growing up too fast and figuring out whether popularity or authenticity is more important. Jenna Rink is a great protagonist as we watch her learn from her mistakes and slowly realize that her thirty-year-old self is nothing like she thought she would be. When she finally gets back to being thirteen, we see her slow down and take in the important things.

How to Lose a Guy in 10 Days may be one of the best rom-coms still to this day. Starring Kate Hudson and Matthew McConaughey, this movie has a twist on the classic genre we’ve come to know and love. Ben (McConaughey) is a bachelor who works in sales and makes a bet with his co-workers that he can make a woman — of their choice — fall in love with him in just ten days, Andie (Hudson) is a girl who writes for a magazine and is coincidentally writing an article, “How to Lose a Guy in Ten Days”. The couple’s conflicting goals backfire when they end up having feelings for one another, and hilarity ensues.

The unconventional story and performances of the two leads play to comedic effect, and the viewer can’t decide who they’re rooting for.

There are so many stars in this movie, including Joseph Gordon-Levitt, Julia Stiles, Gabrielle Union, and the late Heath Ledger. Based on William Shakespeare’s The Taming of the Shrew, 10 Things I Hate About You follows the Stratford sisters through high school. Their dad does not allow them to date. The younger sister, Bianca, is popular and desperately wants to date Joey, so her Dad changes the rule to allow Bianca to date. There are multiple couples throughout this movie, but the main one is Kat (Stiles) and Patrick (Ledger), the misunderstood bad boy of school.

There are so many memorable and iconic moments in this movie; Heath Ledger dancing and singing “Can’t Take My Eyes Off of You” through the bleachers to ask Kat to prom, Julia Stiles dancing on a table, and the heartbreaking reading of Kat’s poem at the end. There’s so many great things about 10 Things I Hate About You, with a great cast, a great plot and execution, it’s too amazing of a movie not to take the number one spot.