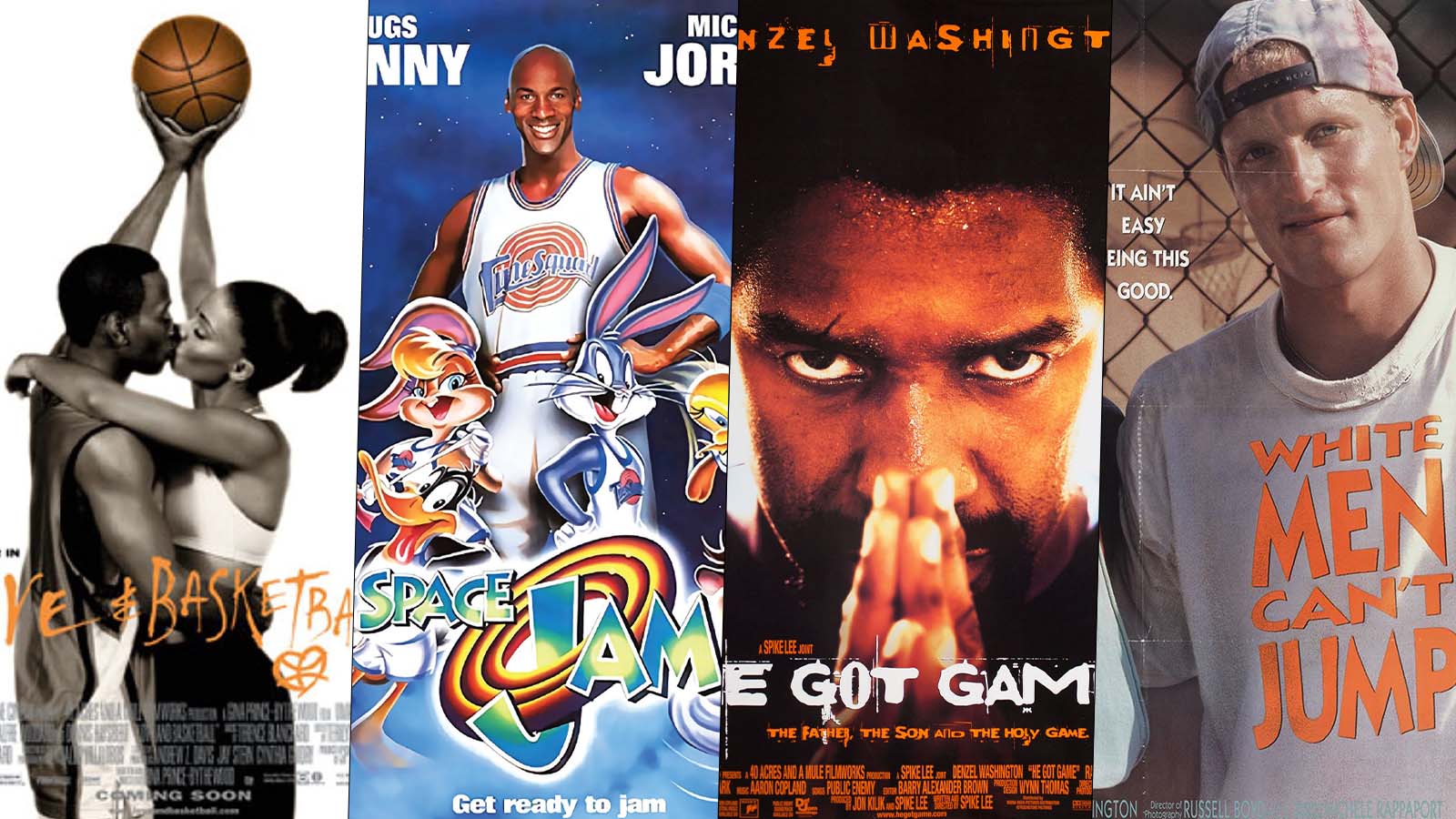 What makes a great basketball movie? Is it the smoothness of the simulated hoops action on the hardwood? The character storylines surrounding the players and games? A crafty blending of some basketball disguised in a movie about something else entirely?

When approaching a topic like the “best basketball movies ever,” the main question that arises is whether or not it’s a basketball movie or a movie with basketball in it. There are a lot more of the latter than the former, that’s for sure.

Let’s start with what are most definitely not great basketball movies. Here are seven that you could definitely skip, for basketball reasons or otherwise:

And now, we’re ready for tip off. Here are the very best, no-doubt-about-it, top six basketball movies ever (i.e., our starting five and a sixth man).

A genuine basketball fan with true knowledge of the game sets out to make a realistic movie about how basketball and life intertwine, featuring an actual NBA star and perhaps one of the top actors ever, period. Spike Lee’s look into the inner workings of college basketball recruiting (you can probably recall some of those “recruiters”) through the eyes of a young Ray Allen (regarded as one of the top three-point shooters ever) and his relationship with his dad (played by Denzel Washington) is a masterpiece. The basketball scenes are captivating, adding to the film instead of detracting from it (just like awful guitar playing in a movie, unrealistic basketball playing is incredibly cringeworthy).

Pressure from the outside burdens the young Jesus Shuttlesworth (that name is freaking epic), played by Allen, something that plenty of budding athletes have to deal with in their adolescence at a time when the world isn’t yet complete. His dad, Jake, is in prison, but has a chance at shortening his sentence if he can convince his son to play for the governor’s alma matter (pressure from influential people is also common in college athletics).

When you think of basketball movies, what’s the first image that pops into your mind? Okay, if it’s Gene Hackman and his Hoosiers crew, that’s cool, but c’mon, that movie drags compared to the pop and flash of the epic Woody Harrelson-Wesley Snipes hoop adventure. Sure, the basketball scenes aren’t totally polished, but they’re still pretty good and add a lot of pizzazz, and they’re at least cut in a way that doesn’t distract.

The humor, the heart, the comparisons between two couples from different backgrounds, and the realistic depiction of streetball and hustling make this is an absolute winner. Don’t you just cringe thinking about Billy Hoyle (lovingly called “Billy Ho’” by Snipes’ character) putting everything he just won on the line to prove his manhood by dunking, a feat he does not come close to completing and which leads to him losing his partner, played by Rosie Perez (damn, dude), which of course sets up his titular comeback scene when he actually rises up to put down an alley-oop from Sidney Deane (Snipes)? The comedy kicks in early, but it’s the depth of character from nearly everyone involved that takes this movie to another level.

If you sense our theme, fantastic. Basketball, like many sports, transcends athletic endeavor and, of course, provides stories and reflections of life while also giving many a livelihood of their own and a very love-hate relationship with fans. Romance, sports, and ultimately feminism play out through the course of this movie, with both the love and basketball coming from its leading duo of Sanaa Lathan and Omar Epps.

What each will prioritize is right there in the title, which illustrates the struggle between dedication to the game — putting in all your heart, effort, time, and attention to the sport — versus making space for companionship and love. You may call the film cheesy at times or too emotional, but hell, real live sports make people cry, throw things in anger, even fall into despair because they’ve attached too much sentiment to it. The portrayal of what people involved in the actual affair go through is masterfully crafted here.

Just like basketball, the pair goes back and forth, offense-defense, with momentum and emotion driving the film from director Gina Prince-Bythewood to a satisfying end (Spike Lee is here as a producer, too). The basketball action ain’t bad, either, once again adding to and not taking away from the overall focus.

Now, we’re willing to concede to the cheese here. Yes, the film is filled with more clichés than necessary, but Samuel L. Jackson coaching a high school hoops team? Yes, please. Based on a true story, Jackson’s character has the “how do I reach these kids?” vibe and plays it through with such total commitment that it cuts through the cheesiness that otherwise could have made this movie a gooey mess. Jackson’s Carter makes the team commit, via contract, to making better grades and keeping up well-dressed appearances on game days. He even locks the players out (hey, this happens in the NBA, too!) when they fail to live up to his standards and has to fight for his convictions with the administration and parents alike.

The underdog struggles are real here, with Jackson pushing his teenaged team to rise above the temptations surrounding them and commit to being better ballers and better people. Yes, Coach Carter’s message ultimately lifts them all up, and if this seems a little too simple and easy, consider that sometimes that makes a movie very watchable and likable. It’s also worth mentioning that the basketball action here is cut well and flows smoothly. For a mid-2000s flick, it’s a good one.

The most sorriest of not-sorries here. Everyone loves Space Jam. Before Shrek was the ultimate kids-and-adults-both-love-it movie, Space Jam brought families together for real. The basketball action here could have been horrendous, childish (it still is, at times), and totally derailed the movie, but Michael Jordan’s commitment to being, well, Michael Effing Jordan while playing with cartoon teammates ⏤ against aliens ⏤ makes this movie utterly watchable and rewatchable (again, not the sequel, though).

Seriously, think of the synopsis of this movie and remove MJ’s name. Really? This concept worked? Legendary stories abound of Jordan pushing his NBA costars, including Reggie Miller and Patrick Ewing, into pickup games in between shooting, to up the intensity of the action scenes and ultimately the movie itself. And Bill Murray, for goodness sake, just steals scenes instead of the rock. He gets his moment, of course, as MJ and Bugs Bunny save the day.

Adult announcers still reference this movie, and the Monstars, when a real NBA star is having an absolutely awful game, wondering aloud whether he’s had his powers zapped out of him á la Space Jam. Don’t be a hater, just sit back and enjoy the show. (And don’t call Lola “doll.”)

Like, damn. Have you seen Hoop Dreams? If you’ve got The Basketball Jones, then this is your flick. It’ll take nearly three hours to watch, but it also took five years to make. This documentary got teenagers interested in documentaries and non-sports fans to take in a film all about basketball (and life). It follows two Chicago teenagers with dreams of making the league, while covering a lot of real life, and goes deep into what it’s like to be talented and young in a big city while it seems the world is against you.

William Gates and Arthur Agee live on the south side of Chicago, where high school basketball games are well-attended with packed gyms and real stakes. (Author’s note: I once covered a game in which Patrick Beverley had a triple-double in my time there). As a documentary, this movie is outstanding. As a basketball movie, it’s unmatched. You simply cannot recreate the reality unfolding in front of your eyes as both young men battle through serious family drama and trauma as well as diverging financial situations. Both kids showed tremendous potential, but because so many do, neither one wound up in the exclusive club known as the NBA.

As with any other film genre, there were naturally a few basketball-themed flicks that didn’t quite hit from three, but felt worthy of mention nonetheless. Here are a few such films that we kind of like but in some cases can ultimately do without.

This is a hard one, but for sure our man Leo puts on a hell of a show. The scene where he’s high AF and trying to navigate dribbling on a court during a game is nutty. The stupendous downfall from living a drug- and women-filled life of youth is startling, and at times it’s a tough watch, but a good flick.

The basketball scenes in this are spot-on because, well, Shaq and Penny Hardaway are actually in the film along with some other real hoopers. The interplay is pretty solid, the storyline of a coach (Nick Nolte) who battles not to give in to the boosters and illegal pay-to-play schemes that saturate college basketball stands up. Nolte has some great scenes, and a few cringey ones as well. Shaq still cannot act, but this was his best before he decided to be a caricature of himself at every possible turn.

This film’s a bit overrated, really. Sure, Ben Affleck is super in it, but otherwise, it doesn’t stand up as a basketball movie. It’s too patently a vehicle for Batfleck to flex his moody acting muscles (and otherwise) to be a true hoops flick. It’s Leaving Las Vegas for basketball, in a sense.

This is a cool movie, if a bit all over the place, but Tupac is in it, mostly as a version of himself. There’s potential here that falls short, with a too-formulaic and predictable storyline.

Yes, yes, this is a legendary basketball movie, but it’s also a snoozer at times, and the storyline is a bit hokey. Superb acting performances, really solid basketball scenes, too, but the ending just didn’t do it for me.

Had to add this in there as a movie that probably most people are aware of, but it doesn’t touch any of the others listed here. In theory, it’s awesome. In reality, it’s okay. It relies on the humor trope too much, without enough ingenuity from Will Ferrell, and is ultimately a huge missed opportunity here having Woody back in a basketball movie.