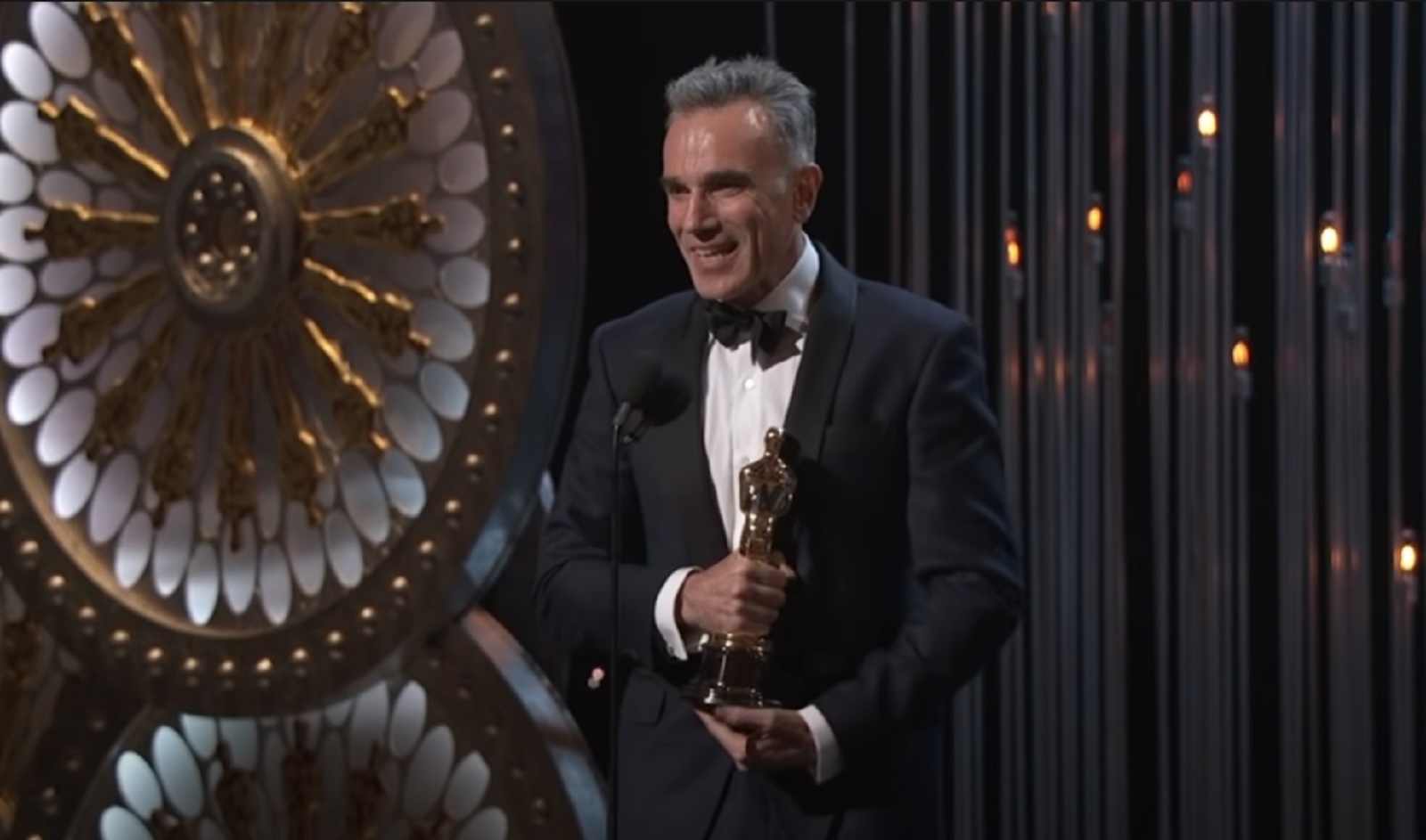 In cinema history, there are few actors who have transcended and transformed the art of acting as we would know it.

Names like Brando, Nicholson, Streep, and Washington come to mind — but this group of all-time greats must also include English actor Daniel Day-Lewis. The first and only actor to win three Academy Awards for Best Actor, Day-Lewis has transformed himself into various characters, giving memorable performances time after time.

After his film debut at the age of 14, he truly began his career in the 1980s, originally acting on stage and on television. His first major project saw him in a small role as a street thug in the 1982 epic Gandhi. He continued through the ’80s with several more roles that improved his acting prowess. He earned his first Oscar in 1989, another in 2007, and a third in 2012.

With work in such a wide variety of movies and a character set that’s just as extensive, it’s difficult to compile a list of his all-time best films. But nonetheless, this author has done it. Below, in no particular order are Daniel Day-Lewis’ best movies of all time.

This 1989 classic was one of Day-Lewis’ first critically-acclaimed films of his career. However, this film is based on the memoir of the real Christy Brown, an Irish writer, and artist who was born with cerebral palsy, rendering him unable to speak and function with just the use of his left foot. Having to accurately portray a man with physical disabilities such as that makes Day-Lewis’ performance all the more remarkable.

The film garnered large success and was nominated for five Oscars, with both Day-Lewis and his co-star Brenda Fricker winning awards for Best Actor and Best Supporting Actress respectively.

There Will Be Blood

In 2007, Day-Lewis was at his absolute best in the American epic period piece, There Will Be Blood. Day-Lewis played Daniel Plainview, a miner that stopped at nothing to succeed financially during the late 19th and early 20th-century oil boom in Southern California.

A simple film that relies heavily on human interaction and behaviors that are ruled by greed, this pick was a success on so many levels. It was nominated for eight Academy Awards and nine BAFTA Awards. Day-Lewis won an Oscar, BAFTA, and a Golden Globe, each for best actor in this film. It also produced perhaps the most memorable catch-phrase of his career — “I drink your milkshake!”

Getting all three of Day-Lewis’ Oscar wins out of the way here is this next pick from 2012, where he accurately portrayed one of the most well-known presidents in American history, Abraham Lincoln. His legendary take on the 16th U.S. President involved incredible preparation for the role. He apparently spent a year reading countless pieces of historical literature, viewing documentaries, and even working with the film’s makeup department to ensure he would appear exactly like Lincoln himself.

The film was up for 12 Academy Awards and seven Golden Globes. For his performance, Day-Lewis was awarded another Golden Globe and his record third Oscar for Best Actor, beating out the likes of Denzel Washington, Richard Gere, John Hawkes, Bradley Cooper, Hugh Jackman, and Joaquin Phoenix respectively.

The Last of the Mohicans

A film that some argue should’ve won Day-Lewis an Oscar is this 1992 period drama based on James Fenimore Cooper’s novel. Day-Lewis also strenuously committed himself to the authenticity behind the starring role by living in the wilderness and learning to camp, hunt, and fish, even going as far as making canoes, just to make sure he was fully prepared to portray Nathaniel “Hawkeye” Poe correctly.

Day-Lewis wasn’t nominated for an Academy Award or Golden Globe for his work here, but he did earn a nod for a BAFTA that year, one of seven for the film.

In the Name of the Father

This 1993 biopic starred Day-Lewis as Gerry Conlon, an Irishman who is mistakenly convicted as part of the “Guildford Four,” a small group of men who were thought to have been IRA members that carried out a bombing that killed four off-duty British soldiers and a civilian. The film’s screenplay was adapted from Conlon’s own 1990 autobiography Proved Innocent: The Story of Gerry Conlon of the Guildford Four.

Day-Lewis went in hard for this role, as he’s been accustomed to doing by losing 30 pounds, spending extensive amounts of time inside prison cells, and even encouraging the crew to be abusive towards him. This film didn’t win any Oscars despite earning seven nominations, including Day-Lewis for Best Actor, Best Actress in a Supporting Role for Emma Thompson, Best Picture, and Best Director for Jim Sheridan, who also co-wrote the screenplay.

The Age of Innocence

Based on the 1920 novel of the same name by Edith Wharton, Day-Lewis was cast as Newland Archer, one of the lead characters. He was acting alongside Hollywood leading ladies Michelle Pfeiffer and Winona Ryder. Legendary director Martin Scorcese directed and co-wrote the script of this 1993 romantic drama. To accurately portray a wealthy attorney to New York socialites of the late nineteenth century, Day-Lewis once again stuck to his method-acting chops by constantly wearing the clothes of that era, whether he was on set or not just to make sure he was consistently in character.

Surprisingly, Day-Lewis didn’t receive any nominations for his performance despite getting consistent praise from critics. However, his co-stars and filmmakers involved with the production earned several nods across the board.

Day-Lewis was again acting alongside Winona Ryder in another period piece, this time adapted from Arthur Miller’s 1953 play of the same title. This 1996 film featured Day-Lewis as John Proctor, a landowner in the Massachusetts Bay Colony. who was accused and later executed along with his wife of witchcraft during the Salem witch trials.

Overall, the film wasn’t received well by critics, despite Day-Lewis’ strong performance. He earned only a partial nomination as part of an ensemble cast nod for an Awards Circuit Community Award and also a Best Actor nomination for New York Film Critics Circle Award.

For Day-Lewis though, the best thing about working on this project was meeting the woman who is now his wife, American filmmaker and writer Rebecca Miller.

Martin Scorsese was at the helm again, directing Day-Lewis in 2002’s Gangs of New York, where he played gang leader William “Bill the Butcher” Cutting, the real-life head of the Know-Nothing political movement in mid-19th-century New York City. Once again, for the sake of authenticity, Day-Lewis was taught how to throw knives by circus performers and had to deal with pneumonia after stubbornly sticking to what he believed were proper fashion trends of the movie’s setting, which didn’t allow for dressing warm enough somehow.

Acting alongside Leonardo DiCaprio, Cameron Diaz, and Liam Neeson, Day-Lewis shined and earned his third Oscar nomination at that point of his career, but wouldn’t win again until five years later in There Will Be Blood.

In 2017, Day-Lewis played a British dressmaker that develops strong feelings for a waitress while holding his obsessive and controlling personality at bay. While it’s considered a historical drama, this film doesn’t shy away from the impactful psychology masterfully presented in Day-Lewis’ lead character, Reynolds Woodcock.

This was the second project that had Day-Lewis collaborate with Paul Thomas Anderson, as There Will Be Blood was the first. However, there were no awards despite several nominations this time for Day-Lewis, as he then retired from acting after the film’s release.

The Unbearable Lightness of Being

Not many people would likely recall this 1988 film from early in Day-Lewis’ career, but this one definitely put him in leading-man considerations going forward. He played a Czech brain surgeon that ends up complicating his personal life when he develops feelings for one of his lovers. It was during the production of this film that he started his widely-known reputation of being a method actor. He learned to speak Czech and didn’t break character even after the cameras stopped filming.

There were no nominations of any kind for Day-Lewis but his performance in this film was still good enough to pave the way for his stretch of critically-acclaimed roles coming out of the eighties and throughout the rest of his career.