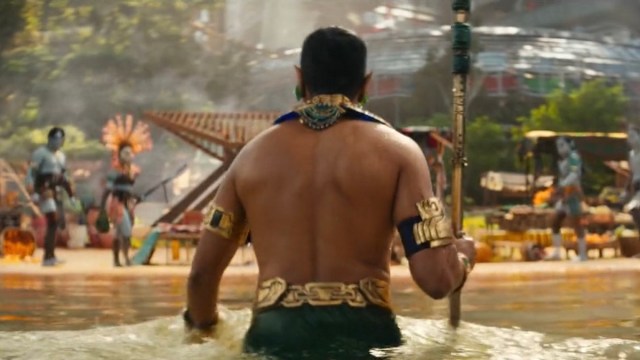 In the initial trailer for Black Panther: Wakanda Forever, we saw that part of the plot involved Wakandans going face-to-face with ocean-dwelling people led by Tenoch Huerta’s Namor, the leader of a civilization we now know is called Talocan.

The news has surfaced from the depths via an official character description for Namor, according to a Marvel-licensed toy by Hasbro as part of their Marvel Legends Series. The description reads:

“The ruler of Talocan, an ancient civilization hidden in the depths of the ocean, Namor will stop at nothing to protect his people.”

In the Marvel comic books, the undersea civilization that Namor calls home is known as Atlantis. But since the DC cinematic universe already laid claim to that moniker, so to speak, by releasing their Jason Momoa-starring Aquaman, we can certainly understand why Marvel would want to make a name change.

The name “Talocan” isn’t just a random assembly of letters, either; it actually has a significant amount of meaning in terms of the new spin director Ryan Coogler is presumably bringing to the comic lore. It’s been speculated due to some of the character’s costume designs seen in the trailer that the undersea dwellers have a connection to Aztec or Mayan mythology. And the name update is directly tied into that, seemingly confirming such a theory. As ScreenRant explained,

“The name Talocan is derived from the Aztec legend of Tlālōcān, a paradisaical realm traditionally ruled over by the rain god Tlālōc and his consort, the water goddess Chalchiuhtlicue; it’s possible Namor and Namora stand in as these two figures.”

Mabel Cadena is the actor who will be portraying Namora, according to Wakanda Forever‘s IMDb page, one of many new faces we can expect to see in the upcoming sequel.

Michaela Coel, Dominique Thorne, and Gigi Bermingham are some other actors coming into the fold, for the first time, for the movie.