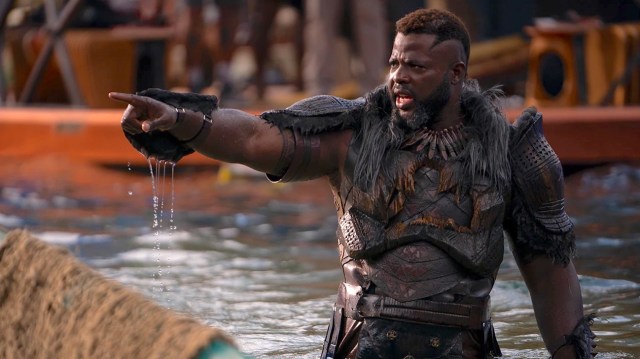 Actor Winston Duke’s playful response to a risqué news headline about his physical attributes is making waves on social media.

A tweet from Bossip audaciously salivated over the Black Panther: Wakanda Forever star’s powerful thighs, describing them as “man yams.”

An enterprising fan of Duke’s thighs suggested that Bossip print the “M’Bussit For M’Baku” portion of the headline on merchandise, referring to the #BussIt challenge that went viral on TikTok earlier this year.

Porschemaecosplay commented on the unfiltered headline with a GIF of Manny from Modern Family getting chilled out by his stepdad with a blast of cold water.

Earlier this week, Duke revealed to Esquire that he’s well aware of the internet’s fondness for his thighs, and seems to enjoy it. Looking at a monochrome photo of himself in a pair of shorts sitting with his legs spread apart, the actor admitted:

“I’ve been a little shameless this past year. I did not need to sit that way at all, but I did. I have no regrets.”

Duke acknowledged that he enjoys what he called the “respectful thirst tweets,” praising his thighs, christening them with the portmanteau “thweets.”

Some fans are focusing on the fact that Duke is easy on the easy with thick thighs, but his good looks are merely a spicy compliment to his scene-stealing acting skills. Black Panther: Wakanda Forever is Duke’s fourth turn as M’Baku, the leader of the Jabari Tribe. He has previously appeared in Black Panther, Avengers: Infinity War, and Avengers: Endgame.