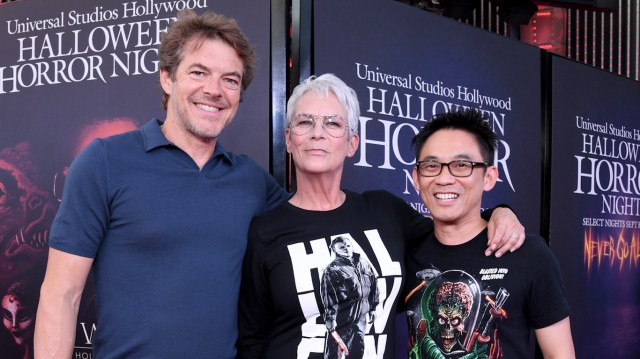 Earlier this week horror fans were in a tizzy over the announcement that two horror movie heavy weights, James Wan and Jason Blum were joining forces to create one monstrous mega horror studio. Blum said he was blown away by the love from fans.

The move would merge Wan’s Atomic Monster production company and Blum’s Blumhouse productions. Recently the duo both happened to be at the American Cinematheque awards, where they ran into each other on the red carpet, according to Variety.

“The industry reaction to our hopeful future together was really everything I hoped for,” Blum said. “And most importantly, the fans went crazy.” That reaction was “really what I wanted most of all.” In fact, he said, the feedback couldn’t have been better.

“The industry was excited; the directors that we work with were excited; the company, our staff was excited, so it was everything that I’d hoped.” If the merger goes through, franchises like The Purge, The Conjuring, Saw, Halloween and Paranormal Activity will all exist under the umbrella of the same company.

He said the merger will help create more movies. “The destination that I’m really hoping for is that we’re making a few more theatrical movies a year,” Blum said. “Instead of two or three, we’re making five or six.”

However, Blum emphasized that he’s not sacrificing quality for quantity. “More importantly than more, is that they’re better and great. I think he and I, in the past, have worked incredibly well together at not just making movies, but making great, scary, classic movies. So that’s my hope in the future.”

Blum is obviously passionate about cinema and the craft of making them. At the ceremony, he was presented with the Power of Cinema Award, where he expounded on that love of movies.

“Stories are able to change our views about things and open our minds to things and give us experiences we haven’t necessarily had, hopefully make us more empathetic, more understanding of other people’s positions. I think there’s almost nothing better at doing that than stories, and in this case, the movies.”

The horror maestro also gave some insight on his philosophy of movie making. He said when he made Paranormal Activity with director Oren Peli and it was a huge hit, he started getting advice from industry bigwigs on how to move forward.

Blum said he was told to make his movies bigger and more expensive and how that was a “normal path to success in Hollywood” that he simply eschewed.

“I thought about why I didn’t want to do that, and all the fun I had on ‘Paranormal,’ and I realized that I wanted to keep making weird little independent movies that might have a huge cultural impact. And if we did get those little movies into thousands of theaters, they become big movies.”

He then pointed out Wan in the ballroom. “I’m very, very excited for what might come when we all hopefully work together. I owe so much thanks to all those directors and all the great artists that we’ve worked with over the years, and all these people trusted our little system to make their movies.”