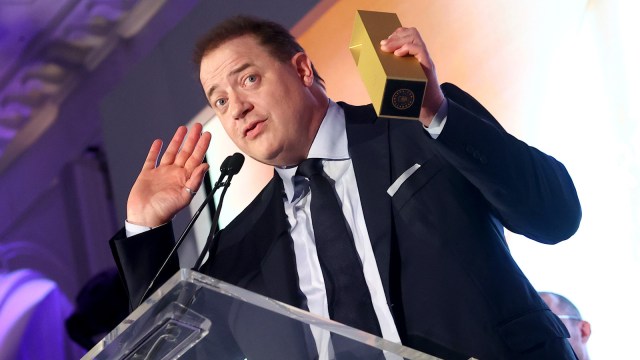 DC fans are still crushed over the news that we’ll never get to see the Batgirl movie, following Warner Bros. Discovery’s decision to unceremoniously dump the Leslie Grace vehicle from the schedules, but it seems co-star Brendan Fraser has taken the announcement on the chin enough to joke about the film’s cancellation in an interview for his new acclaimed movie, The Whale.

As shared by DC Daily on Twitter, Fraser and screenwriter Samuel D. Hunter were asked during one chat with the press what other projects they had in the pipeline. Fraser lets Hunter go first, who talks about a new play he has coming out this winter, before The Mummy star jumps in with his stone-cold answer. “Batgirl… Oh,” Fraser deadpans, before bursting out laughing.

While Grace was set to play the eponymous heroine, Fraser would’ve portrayed her nemesis Firefly. Fans had been more than hyped to see not only Fraser return to the DC universe, on top of his role as Robotman in Doom Patrol, but also to have him bring that underrated Batman villain to life. Sadly, we’re now fated never to see what he would’ve done with the part.

Fraser’s light-hearted reaction to the disappointing Batgirl development makes it clear that it’s DC’s loss that they failed to capitalize on what could have been a real cult favorite entry in the superhero franchise, and not the actor’s. Fraser is currently enjoying a well-deserved career renaissance right now, something only bolstered by his transformative performance in The Whale, so his resume is no doubt going to go from strength to strength after this — despite his self-effacing joke that he’s got nothing else in the works.

Other Batgirl castmembers, however, are understandably less thrilled about the news, with Ivory Aquino sharing an impassioned plea to get the studio to reverse their decision. Fraser himself has previously expressed regret that audiences won’t get to see Leslie Grace’s “dynamic” portrayal of Barbara Gordon.