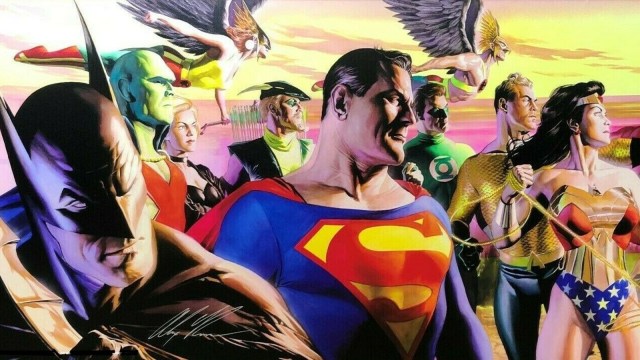 DC Comics has such a high number of potential projects it could be producing that it should be criminal that Warner Bros. hasn’t given them to us. There’s more than just Superman, Batman, Wonder Woman, and the Justice League that can entertain and enlighten audiences. While they’re all amazing in their own right, it still only scratches the surface of what DC has to offer.

In our biased yet well-researched opinion, DC has the best IP around. There’s a reason why the names of their most popular characters are so engrained in the zeitgeist and referenced frequently. It’s because these characters have left such an indelible impression on pop culture that it can never fade. It’s a pure myth that DC projects can’t work or these properties aren’t relevant and any lack of success is not the fault of the creations themselves.

What Warner Bros. needs to get its proverbial head around is that it doesn’t need to be Marvel Studios — and it shouldn’t be Marvel Studios. Even Dwayne Johnson knows that chasing after the MCU is a bad move. DC is held to a much higher standard and it has to live up to it because the adamant fanbase won’t settle for less or make peace with comedically generic interpretations of their favorite heroes to appease the mainstream public. They want quality stories that show the glory of DC Comics.

So, when and if Warner Bros. ever decides to live up to DC universe’s full potential, it can start with these ten dream projects that are destined to be a success once they get the proper live-action-treatment.

The Justice Society of America has been on the sidelines for way too long. The JSA has appeared in live-action multiple times before, and they’re all set to appear in the upcoming Black Adam, but they need to be more than just an add-on to someone else’s story. They deserve their own movie.

The speedster Jay Garrick/Flash, the power ring-wielding Alan Scott/Green Lantern, the boxer Ted Grant/Wildcat, and the super-powered Kryptonian Power Girl should be leaders in the DCEU as they are DC comics’ first superhero team as they build up their ranks with legacy heroes. People might be tempted to compare them to the Justice League, but they’re more grounded, living amongst the people like hometown heroes and not floating above us in a satellite. The story would involve reconciling Golden Age heroism versus modern age apathy, and the generation gap is fertile soil for some relevant commentary.

Spinning off of Justice Society of America would be a Doctor Fate TV series starring Pierce Brosnan as the sorcerer supreme. This would be an HBO Max series and it would follow Kent Nelson as he trains newcomer Khalid Nassour in the ways of magic. Khalid is a Muslim-American med student who finds himself in the possession of the Helmet of Fate. The series can thoroughly delve into Egyptian mythology, religion, and science.

Kent would be Nassour’s teacher through this world of strangeness as they maintain the natural order of magic and bond with one another. They’d be based in the Tower of Fate, a four-sided pillar with no windows that acts as a doorway between realities and study arcane magic to find the best ways to deal with the mystical threats. The best news of all is that Brosnan, who is set to play Doctor Fate in Black Adam, has said he’s never been so excited to play a character, so there’s a strong chance this could become reality.

It’s irrefutably unfair that every other member of the Justice League has a movie and Cyborg does not. That sends the message that this character is undeserving and that couldn’t be any further from the truth. Victor Stone’s story is one of tragedy and triumph, and there are so many places this character could go. He’s a football jock who’s been turned into a machine, ostensibly the antithesis of his former self. A movie could show how he connects to the world and to himself and show the true power he has inside.

We live in such a technological world, that Cyborg’s abilities would make him godlike. Ray Fisher is more than prepared to play a man struggling to redefine his identity between man and machine. He was a Titan before being made into a Justice League member, and ignoring this character makes it seem like he was just used to fill a slot rather than represent something greater.

This might be the most “Oh, my God, why haven’t they done this” project on the list. Teen Titans needs a tried and true live-action adaptation of the titular heroes. It would focus on the original team of Dick Grayson/Robin, Donna Troy/Wonder Girl, Roy Harper/Speedy, and Garth/Aqualad, as the superhero sidekicks go out on their own, find friendship, and battle bad guys.

Deathstroke would be their first villain and the sequels would span the team’s various eras. The second movie would be the New Teen Titans with Dick appearing as Nightwing along with Starfire, Beast Boy, Raven, and Cyborg. It would adapt the Judas Contract by Marv Wolfman and George Perez. The villain would use the earth-manipulating Terra to manipulate the team, really fracturing them.

The new kids on the block, i.e., Tim Drake/Robin III, Conner Kent/ Superboy, Cassie Sandsmark/Wonder Girl, and Bart Allen/Kid Flash II, would lead the third movie under the guidance of the older New Teen Titans members sans Dick, who quit after the Terra fiasco. Tell me this wouldn’t be one epic treat for DC fans.

Mari McCabe would be so interesting to watch in a feature film. With the power of her Tantu Totem, she can possess the ability of any animal, but the real fun is in how she commands it with expertise and style. For the movie, she’d be living the life of luxury as one of the world’s top models. Fancy hotels, fine dining, paparazzi, but all that glamour is hiding her more humble roots. She’s from Zambesi, a small village in Africa that tells the legend of the Tantu Totem created by Anansi the Spider God, which gives its wearer the powers of the animal kingdom.

Her childhood was cut short when her mother was killed by a poacher and she escaped to the United States to start a new life, eventually becoming a model, and eventually, the superhero Vixen. The movie’s plot would see Mari leaving her life of fame and fortune and returning to Zambesi to stop its imminent destruction by her uncle General Maksai, his militant forces, and her elder sister Kuasa. Throw in some philosophical tutelage from Anansi to remind Mari not to forget who she is and you’ve struck gold. The story is right there.

Justice League Dark needs to be made into a TV series so badly that it infuriates many DC fans. Though it’s not looking like the J.J. Abrams project is getting off the ground anytime soon, no matter how much time it takes, it shouldn’t be abandoned. The potential to explore the magical world of the DCU is too tantalizing with its mysterious characters and rules.

It would be a series that would present the adventures of Zatanna, John Constantine, Swamp Thing, Detective Chimp, Deadman, Blue Devil, and Enchantress as well as include special appearances by Doctor Fate). This collection of heroes would take on magical cases, and journey through the underworld and other realms to make sure malignant forces are kept away from great power.

Okay, this actually might be the most obvious movie project on the list (I know I keep repeating this but it’s true). For many kids growing up, John Stewart was the Green Lantern they knew from the Justice League animated series. He’s got name recognition and people love him. John’s experience as an architect and a military man transitions into his role as a superhero. He’s diligent, structured, and knowledgeable, but like every superhero, confronting his greatest fears is his biggest battle.

The movie could show the destruction of the planet Xanshi as a result of John’s inability to save it from a bomb. This would feel markedly different from the standard, feel-good superhero movie since John would have to deal with the fallout from his failure. His past would come back to haunt him, which includes the lives he took on the battlefield and then the life he constructed himself to hide away from it all. It would prove yet again that superhero stories could be more than popcorn flicks.

While Wonder Woman is smashing villains and fighting the good fight in the DCEU, her history, and the world she grew up in need to be built up and a great place to start would be with the Amazons. Think Game of Thrones meets Greek mythology. Themyscira would have to defend itself against other kingdoms, like the Bana-Mighdall who split off from the Amazons led by Queen Hippolyta’s sister Antiope, and the pantheon of Greek gods with their own desires.

The battles would be epic and the drama would be Shakespearean with intense speeches, political drama, and climactic battles. Wonder Woman can even pop in from time to time and save the day when the story calls for it. Nubia and Yara Flor could be introduced in this series as well. A sword and shield fantasy epic is just what the DCEU needs right now.

Not to be confused with the Suicide Squad, the Secret Six is a group of anti-heroes and villains who don’t subscribe to either side of the coin — they are neither good nor evil. The team consists of Catman, Deadshot, Scandal Savage, Knockout, Ragdoll, and Parademon. The reigning presence of dark humor in the group is a breath of fresh air.

These anti-heroes join hands after refusing to be recruited for the Secret Society of Supervillains, which makes them enemies of every other villain out there. As if worrying about the heroes wasn’t enough already.

Even though they are just a bunch of anti-heroes, there’s a greater sense of camaraderie between them than the typical villain who’s just looking to destroy their enemy at all costs. Thus after everything is said and done, you’ll be left questioning if they really are all that bad.

Producing a Legion of Superheroes series sounds daunting, but if Star Wars and Star Trek can pull off galaxy-expansive universes, so can Warner Bros. The story takes place in the 31st century and has a massive team of cosmic superheroes at its heart.

Depicting all characters from the series in a screen adaptation would, undoubtedly, take a lot of work. So, the movie or series could start small, and like the DC superheroes of our modern times, it would have a trinity at its core. The plot would go as follows — Cosmic Boy, Lightning Lad, and Saturn Girl are chosen by the United Planets in a time that’s gripped by xenophobia. Cosmic Boy is a Braalian with super-magnetism powers from Earth, Lightning Lad is from Winath and can absorb and manipulate electricity, while Saturn Girl is a powerful telepath from Saturn’s moon Titan.

Earth, Winath, and Saturn have come to an agreement that these three heroes should lead their missions as space protectors. They’re given diplomatic privileges to travel from planet to planet under the strict condition that they are not to add any members to their team (because of xenophobia). Of course, they break the rules, and fan favorites join their ranks: Timber Wolf, Brainiac 5, Chameleon Boy…the list goes on. The team continues to fight against the rules imposed by the United Planets and they form the Legion of Superheroes.

Though currently, Warner Bros. is navigating a chaotic time and is busy shelving projects, the day they attain even the semblance of balance, these projects could be the lifesavers the DCEU desperately needs.