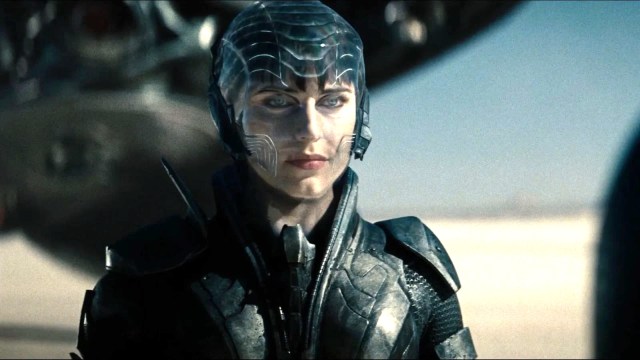 The Flash is going to be a busy movie. We’re getting two versions of the title character, both Michael Keaton and Ben Affleck’s Batman, Michael Shannon as Zod, and Sasha Calle as Supergirl. Warner Bros. are excited about its prospects, though there’s still a question mark hanging over its release due to the headline-grabbing antics of star Ezra Miller. However, there’s one big DCEU comeback that has fans particularly excited.

That would be Antje Traue reprising her role as Faora from Man of Steel. There, she was depicted as a brutal Kryptonian warrior relishing being enhanced under Earth’s yellow sun. Her use of superspeed and strength to demolish a squad of soldiers was a terrifying display of power, but the crowning moment of awesomeness was her face-off with Christopher Meloni’s decidedly non-superhuman Col. Nathan Hardy.

After running out of ammo, he unsheathes his combat knife, and Faora responds in kind. She’s also clearly impressed at his bravery in the face of an invincible foe, assuring him that “a good death is its own reward”. Now, fans on r/DC_Cinematic are hoping for more of the same in The Flash.

Responses agree that this is one of the most effective scenes of superspeed ever filmed, and a genuinely terrifying look at what combat against a superhuman would look like. However, much of Faora’s effectiveness is down to Zack Snyder’s direction, with even those who criticize him generally agreeing he’s excellent at action scenes. Can Andy Muschietti match it?

We’ve already seen the Flash’s speed versus a Kryptonian in Zack Snyder’s Justice League, so getting more of that when the Scarlet Speedster squares off against Faora next summer should be a wild ride. Fingers crossed the movie (if it comes out at all) does Faora justice.