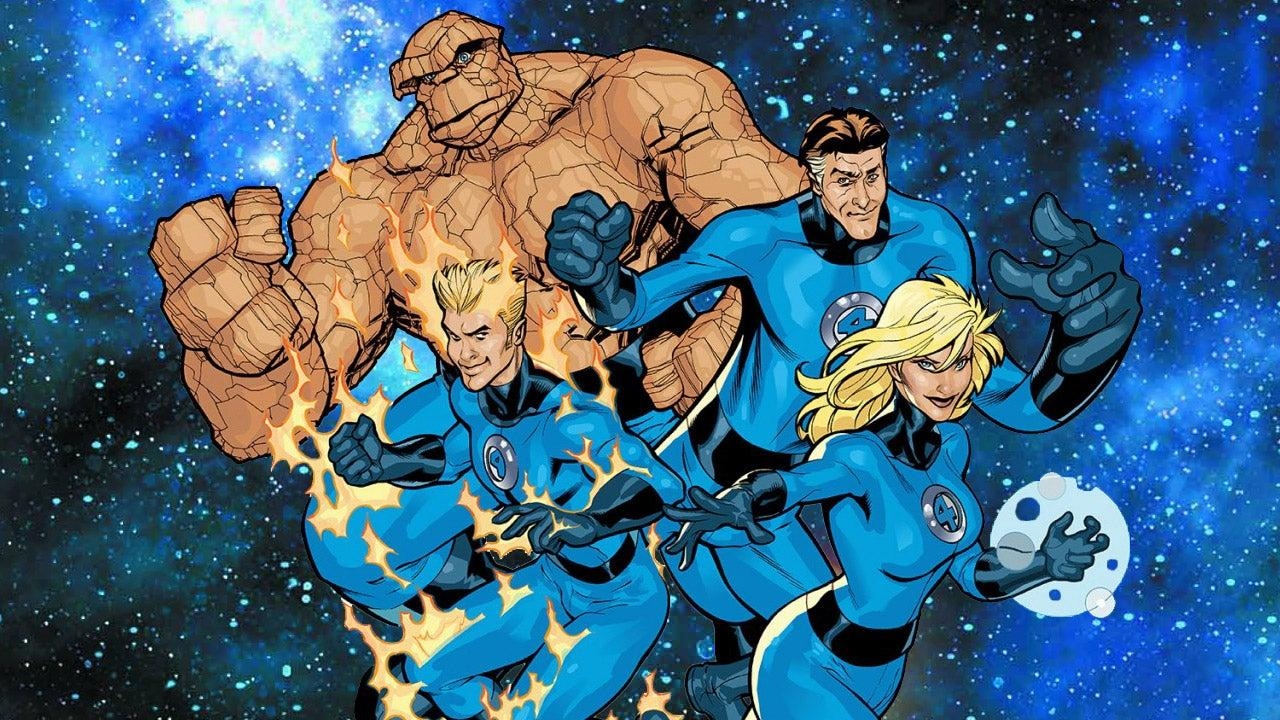 During his recent Tonight Show appearance, John Krasinski may have left a trail of breadcrumbs leading to the Baxter Building.

Sometimes, it’s what’s left unsaid that speaks the loudest. While appearing on The Tonight Show with Jimmy Fallon last week, Krasinski was clearly instructed not to say anything about the Fantastic Four. Even host Jimmy Fallon preceded this portion of the interview by saying that he was not allowed to ask about the MCU or, more specifically, the FF. However, they carefully danced around the issue to give the fans what they came for.

Granted, Krasinski didn’t say much, but he did acknowledge that his wife, Emily Blunt, was rumored to portray Sue Storm-Richards, and that drew major applause from the crowd. Was it confirmation that the real-life couple would play Marvel Comics’ most famous fictional couple? Not at all, but it was enough to give us something to talk about.

The fact that neither Krasinski nor Fallon were allowed to directly address anything involving the Fantastic Four definitely spoke volumes. Granted, after Spider-Man: No Way Home, Marvel fans have become suspicious of actors and their interviews. Although it was for a good reason, Kevin Feige and Andrew Garfield outright lied to keep the NWH secrets and fun intact, which is understandable. Krasinski and Fallon could have been simply pranking the crowd, and it’s doubtful that anyone would be surprised. But where’s the fun in that?

Let’s assume that, yes, Marvel and NBC gave the pair strict directions on what they could and could not discuss on the air. Without saying a word, that would basically confirm that Krasinski will return as Mister Fantastic. After all, if he isn’t involved in FF, by all rights he would be allowed to speak freely because, well, he wouldn’t actually know anything.

The Emily Blunt comments were particularly interesting, and that could be another clue or just Krasinski having fun with the audience. With the FF movie only two years from a release date, it seems odd that there have been no casting announcements. It could be that, since Marvel is bringing Krasinski back after Scarlet Witch turned him into ribbon, they wanted to keep a tight lid on things so the trailer would be a major reveal.

Since playing Reed Richards in Doctor Strange in the Multiverse of Madness, Krasinski has been overall quiet about his Marvel future, but he has been upfront in the past about wanting to be the MCU’s Mister Fantastic. Famously, the actor has wanted to join the MCU for over a decade. He was reportedly in the running for Captain America in 2010, and he said in a 2020 interview with Total Film that he “would love to be in the Marvel Universe.” He added, “I love those movies because they’re fun, but I also think they’re really well done. And certainly, a lot of my friends are in those movies.” As for being in the FF movie, he added at the time, “I have no idea what they are thinking. But if they are considering me for Mr. Fantastic, continue to consider me because I would love it.”

Here’s something to consider: just because Krasinski could be Reed Richards, doesn’t mean he will be the only Reed Richards. One of the foundations of The Multiverse Saga is the numerous variants from across time and space. That has been the one running thread strung across some of Phase 4’s biggest projects. Variants were first introduced in Loki, and the entire first season of What If…? was based around the idea of alternate-reality versions of Marvel’s famous faces. Then came Spider-Man: No Way Home, which set a new precedent in what we consider Marvel canon when all three big-screen Spideys joined forces.

That brings us to the polarizing Doctor Strange in the Multiverse of Madness. Again, the recurring theme of Multiversal variants was prominent in this movie. We saw multiple Wanda Maximoffs, four Doctor Stranges, two Christine Palmers, and an Earth-838 Baron Mordo (in a pear tree). The real showstopper was that world’s Illuminati, made up of alternate-reality Professor X, Captain Carter, Black Bolt, Captain Marvel AKA Maria Rambeau, and of course Krasinski as Mister Fantastic. They revealed how they agreed that their Doctor Strange, who had been corrupted by the Dark Hold, had become too dangerous to live. Then, Scarlet Witch showed up and decimated them without hardly breaking a sweat.

The biggest piece of the puzzle is Avengers: The Kang Dynasty. Feige confirmed that Jonathan Majors’ Kang would be the all-powerful threat to the Multiverse that brings together a new team of Avengers. Feige also said that we will see many different Kangs throughout Phase 5, which could hint at the Council of Cross-Time Kangs.

All of this could lead back to the Fantastic Four, specifically Reed Richards. The comics tell Kang’s origins as a distant relative of Reed who discovered time-traveling technology thanks to Reed’s time-displaced father, Nathaniel Richards. With the FF being traditional Kang adversaries and the connection between Kang and the Richards family, these characters will influence each other.

That brings us back to Krasinski and his Tonight Show…suggestions, we’ll say. Sure, we saw him die a brutal death in MoM, but since that all took place on Earth-838, it is feasible that Marvel could have Krasinski return as Reed Richards.

The Council of Reeds

The Multiverse is the single most convenient plot device ever conceived, and it makes an easy solution for dead characters. It also allows for a range of actors to play the same character, as we saw in Loki and No Way Home. That is precisely the reason we should see some version of the Council of Cross-Time Kangs. However, they are not the only variant squad in Marvel Comics.

Reed Richards has his own variant family reunion. As it turns out, every Mister Fantastic in every reality is a scientific genius. While most of them use their intelligence to better mankind, they tend to be lonely and isolated. They also typically enjoy diving into alternate dimensions and exploring the possibilities.

In three different realities, Mister Fantastic was able to wield the Infinity Gauntlet. Using that godlike power, they ventured deep into the Multiverse, even going to the space that lies between the dimensions. There, the three Infinity-powered Reeds built their own grand hall where all the Reed Richards from all universes came together. They named themselves the Interdimensional Council of Reeds.

Eventually, the Celestials noticed this group of interdimensional Mister Fantastics meeting together in the Multiverse. The Celestials wanted their dimension-hopping technology for themselves, but the Reeds fought back. Many of the variant Fantastics died in the skirmish, though the Earth-616 Reed obviously survived.

How does this relate to John Krasinski? Although we saw Mister Fantastic slaughtered on Earth-838, the Multiverse offers infinite possibilities for his return. One of the more interesting ways to resurrect the character is for Marvel Studios to venture into the Interdimensional Council of Reeds.

This version would be built from the cinematic Reed Richards. It would give the Fantastic Four their crowd-pleasing No Way Home moment by bringing together previous Mister Fantastics Ioan Gruffod, Miles Teller, and even Alex Hyde-White, who played Reed in the unreleased Roger Corman FF movie from 1994 — a movie so bad that Marvel didn’t want it seen by the public. These days, social media holds horrible movies in high regard in the name of ironically cool escapism. That crowd would love seeing Hyde-White, and it could be enough to get Corman’s FF to the masses.

From a storytelling standpoint, introducing the Interdimensional Council of Reeds would also provide a counter to the Council of Cross-Time Kangs. Seeing a full-scale battle of the variant councils would be a sight to behold.

D23 could hold the answers

Between the FF’s mystery castings, possible director, and even the plot, there is so much we don’t know about the upcoming movie. That lends itself to theories and speculation galore, but I imagine the full plan will begin unfolding piece by piece in the coming months. In fact, something could be on the horizon as early as this fall.

After Marvel’s huge SDCC panel, we have wondered what the studio could have in store for the D23 Expo coming in September. With the FF’s MCU premiere date set, the next thing is to reveal the full cast and director. That would make for a sizeable splash at Disney’s premiere event, and The Tonight Show interview could be the first serious hint at what’s to come.