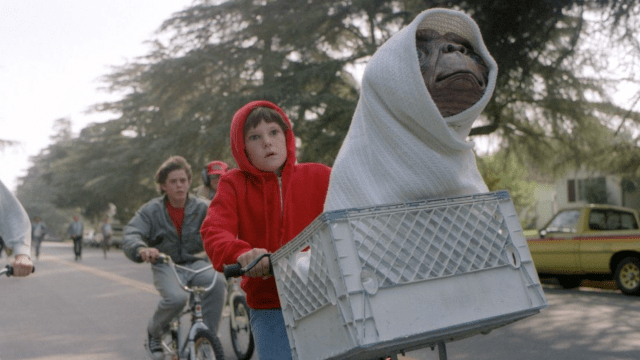 While some cinematic masterpieces have received countless forgettable (and sometimes unnecessary) sequels following the success of an original, other favored movies have never received a proper sequel — despite a slew of fans pining for one. This can certainly be said about Steven Spielberg’s 1982 sci-fi phenomenon E.T. Now, over 30 years after the movie’s acclaimed release, star Henry Thomas has dished on whether the Spielberg vehicle will ever get a sequel.

For some background, the popular ‘80s film told the story of a young boy named Elliot Taylor who encounters an extraterrestrial being after discovering the alien has been left behind on planet Earth. Elliot — portrayed by Thomas — eventually names him E.T., and the two form a close bond. While chatting with ComicBook.com, Thomas mentioned a recent Xfinity ad that featured E.T. sparked the conversation about a sequel but expressed confidence that the stunt was probably as far as Spielberg would go rather than an actual sequel.

“There had been ideas kicked around over the years. There were some serious talks early on because the studio was really pushing for it, to follow up the success of the 1982 season. That’s why the commercial, I think Spielberg okayed the commercial because that’s as close to a sequel as he’s willing to go, as he’s willing to allow. The response for that Xfinity spot was so overwhelming and people thought it was a teaser for a sequel which created a huge, huge stir on the internet. I don’t know if it made it past the internet.”

Despite Thomas appearing pretty confident in his words, this is Hollywood, after all — meaning anything has the power to happen. And considering E.T.’s undeniable popularity over the decades, perhaps the science fiction cash-grab is more attractive than it looks on paper.