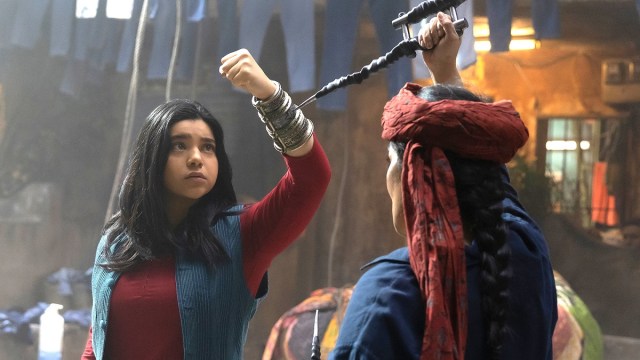 One of the greatest unanswered questions in the Marvel Cinematic Universe that continues to haunt fans is whether or not the titular immortal aliens that made their debut in Eternals will end up getting a sequel.

While the intergalactic epic nabbed $400 million at the box office, a solid return by the standards of the pandemic, it did suffer the misfortune of becoming the one and only MCU project to end up on the wrong side of the Fresh fence on Rotten Tomatoes. Patton Oswalt stoked the fires of speculation when he teased an announcement was incoming, but star Kumail Nanjiani poured cold water on that particular line of inquiry during an interview with The Playlist.

“I have no idea. I don’t think Patton was right. I think that there was a hoax website – one of those where it’s like one letter off from the real one. They tweeted it, and it spread around and I think that’s what Patton saw. I honestly don’t know anything. I would love for Kingo to come back. I love playing that character…That one’s very fun to play, you’re just in a good mood. You do finger guns, you’re like a movie star – what’s not to love? You’re just in a good mood the entire time.”

Regardless of whether or not Eternals ends up as one of the franchise’s rare one-and-done efforts, Nanjiani knows exactly who he wants to team up with if and when he gets the call to return.

“I would love to pair up with Ms. Marvel! I just love that show and I thought Iman [Vellani] was so good and I just got to meet her and hang out with her for the first time and she’s just such a talented actor and such a wonderful human being and I think we’d be great on screen together. I’d love to be paired up with Ms. Marvel.”

It seems as though everyone wants to share the screen with the MCU’s brightest new star, and we can only hope Nanjiani gets his wish, whether it happens as part of an Eternals movie or one of the many other crossovers currently in the works.