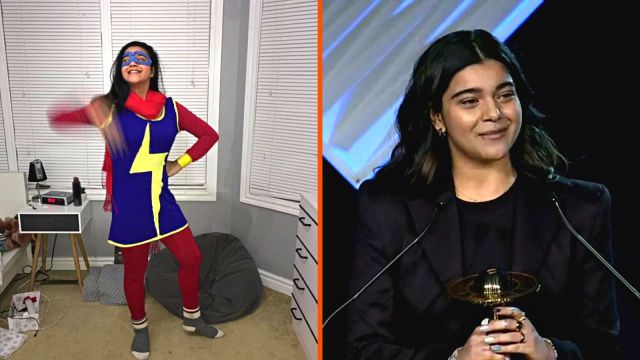 For all the negativity and trolling that can sometimes plague the Marvel fandom, there are some endearing moments of celebration where the love is felt. The reaction to Ms. Marvel rising star Iman Vellani getting her first acting award for her performance on the show has been one of those instances.

Vellani won Best Performance by a Younger Actor in a Streaming Series at the 50th Saturn Awards on Monday. This is the first year the Streaming category has been introduced in the awards, which are hosted by the Academy of Science Fiction, Fantasy and Horror Films.

Marvel fans are elated about the young actress’s first accolade, agreeing that she did a wonderful job bringing Kamala Khan to life. “Best casting since RDJ,” one fan said. Vellani was up against fellow MCU debutante Hailee Steinfeld, who was nominated for her performance in Hawkeye.

“This is cool. Thank you for recognizing Ms. Marvel,” Vellani said in her speech. “I got to work with so many nerds!”

The 20-year-old actress is a well-known Marvel geek herself and used to cosplay as her Ms. Marvel character before joining the MCU.

Thanks in large part to Vellani’s portrayal of the young superhero, Ms. Marvel is leading the ranking of Marvel’s Phase Four, as the franchise’s highest-rated production post-Infinity Saga on Rotten Tomatoes, at 97%.

The award-winning actress will reprise her role as Kamala Khan in the upcoming feature film The Marvels, featuring Brie Larson as Captain Marvel, and Teyonah Parris as Monica Rambeau. It’s directed by Candyman and Little Woods‘ Nia DaCosta.

The Marvels has finished production and is expected to hit theaters on July 28, 2023.