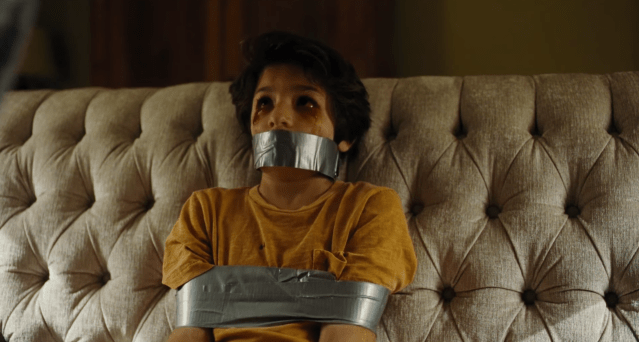 A24 is one of the few remaining independent film distribution companies with a distinct identity. Since its launch back in 2012, A24 films has distributed some of the most memorable and impressive independent films to hit the market, including the 2017 Academy Award winner for Best Picture, Moonlight. One of their defining characteristics is their ability to highlight stories in all genres, working with young, talented creators on movies of all shapes and sizes.

That said, there’s been one genre they’ve mastered like no other: horror. Whether it’s high-minded fare like Robert Eggers’ black and white folktale, The Witch, comedic spoofs like the Chance The Rapper vehicle, Slice, or Kevin Smith’s foray into horror, Tusk, A24 knows its way around the creepy, bizarre, and downright terrifying. Here is every A24 horror movie, ranked from worst to best.

Our list starts with the aforementioned horror spoof Slice starring Chance The Rapper, Zazie Beetz, and Stranger Things’ Joe Keery. This is a film that should, by all accounts, work quite well, which is why it is so disappointing when it arrives as dead as the ghosts haunting its convoluted plot. Spoofs, by their very nature, are haphazard. The best of the best — Airplane, Men In Tights, even Scary Movie — are not movies built on airtight plot but still, there remains something in those films to grasp onto, something noticeably missing from Slice. Also largely absent, despite all signs surrounding the film, is Mr. Chancellor Bennett himself, who appears for no more than 20 minutes of Slice.

2019’s The Hole in the Ground imagines a world in which a young boy slowly transforms before his mother’s eyes, becoming something sinister, disturbing, and wholly unrecognizable. If that sounds familiar, it’s because it very much is. Possessed children movies may be one of the most prevalent tropes in all of horror and, at least in theory, it makes sense. Children do change, constantly, and so it hits on a particular bit of parental anxiety to imagine the worst possible outcome of that transformation. Unfortunately, this movie does little more than retread familiar beats, severely limiting its potential as more than a mash-up of past superior films.

Life After Beth is another attempt from A24 to find the lightness in the horror movie structure. This film is much more focused than Slice, though, choosing to morph rather than spoof classic horror elements. The movie tells the story of Zach (Dane DeHaan), a teenage boy mourning the untimely loss of his girlfriend Beth (Aubrey Plaza) to a snake bite. It isn’t until Beth returns, having dug herself out of her own grave, that things take a turn toward the broad and bizarre. Is Beth a zombie? Was she ever dead to begin with? Why does she want to spend all her time in the attic? These questions are answered to varying degrees of satisfaction, but even when they are answered, a dozen more show up in the proceeding minutes.  Everyone is game here — especially John C. Reilly and Molly Shannon as Beth’s frantic, delusional parents — but the movie doesn’t quite come together in a way that makes it any more than mere oddity.

There is plenty of horror for writer and star of False Positive Ilana Glazer to mine here, most of it more directly related to patriarchal arrogance and repression than your typical bogeyman. As a kind of modern send-up of horror classic Rosemary’s Baby, this film definitely has its moments. For a pretty understated, direct-to-Hulu movie, False Positive has a pretty fantastic cast, including Justin Theroux, Sophia Bush, and Pierce Brosnan as a wonderfully hammy evil doctor. That being said, its story really sputters after a pretty effective set-up, leaving us with a movie that feels more half-baked than it ought to.

Even the best horror films can sometimes prioritize mood over story. With the best of the best — some of which we will get to later in this list — the mood can be so unnerving and effective as to smooth even the most glaring narrative cracks. Unfortunately, The Blackcoat’s Daughter, the story of two students stranded at a prep school, does not reach that level. Starring Emma Roberts and Kiernan Shipka, this movie desperately wants to weave its meandering plot and puzzling timeline into something profound but ultimately leaves viewers as cold as its icy winter setting.

The Monster, starring Zoe Kazan as a less-than-stellar alcoholic mother, is a simple movie, as its title would suggest. This isn’t, however, strictly a bad thing. So many horror movies aspire to grandness that it is sometimes nice to get a good old creature feature, and this is just that. Of course, there is a bit more going on than a mother and daughter fighting to survive an attack from the gnarly titular beast but its self-contained, chamber-piece nature is what elevates this over some of the other movies on this list.

What’s there to say about Tusk? It is, without a doubt, the strangest horror movie in A24’s catalog. It also has perhaps the best villain in A24’s history, a reclusive, walrus-obsessed, pseudo-scientist named Howard Howe, played by an extremely arch Michael Parks. His victim comes in the form of Justin Long, playing a despicable podcast host who falls helplessly into Howe’s increasingly bizarre and evil master plan. You won’t mistake this one for the kind of elevated horror that comes later in this list but that doesn’t mean it doesn’t make for a hell of a time.

The horror in Gasper Noe’s Climax is not in the setup but the execution. A dance troupe holed up in an abandoned school for days of rehearsing is not exactly a typical horror setting but add in some acid-spiked sangria and a few of Noé’s signature scenes of chaotic violence and you have a truly inventive horror movie.

It speaks highly about this distributor’s track record that you are almost immediately able to identify Lamb as an A24 film. Borrowing from movies we will get to later like The Witch and Midsommar, this is a film that errs toward the mythological, trading in reason and rationality for moody mysticism. Avoiding spoilers, I will say both Lamb the movie and its titular character are unlike anything you’ve ever seen depicted on screen.

Does there exist two more idiosyncratic performers working today than Robert Pattinson and Willem Dafoe? Maybe, but I doubt anyone would have been quite as down as these two are in The Lighthouse. Shot in stark black and white and featuring characters rambling on in a period-specific dialect replete with sailor jargon, this is a movie that will test some viewers’ patience for the strange, but give it time to sink in and it can be quite a haunting experience.

Before we begin, yes, this is a film in which there is a pandemic quickly ravaging the world’s population. And, yes, it is understandable that your appetite for such a story may not be what it might have been in 2017. That being said, this is not really a movie about disease of the body but of the mind, namely jealousy, fear, and paranoia. Starring Joel Edgerton, Christopher Abbot, and Riley Keogh, It Comes At Night doesn’t rely on classic horror tropes but does create a mood so pervasively uneasy as to leave you wriggling in your seat.

This next entry, from first-time director Rose Glass, manages to explore the deepest corners of religious zeal. Saint Maud is a movie hyper-focused on its protagonist (played by the excellent Morfydd Clark) whose newfound Catholicism leads her either to divinity or madness, a mystery slowly unraveled but not exactly addressed directly. For a film powered by relative newcomers, this is an especially impressive notch on A24’s ever growing belt.

The Killing of a Sacred Deer director Yorgos Lanthimos is, to put it mildly, an acquired taste. His use of stilted dialogue and heavily metaphorical storytelling will not be for everyone, but if you can accept the peculiarities of his execution you will find yourself in the hands of one of the most inventive directors working today. The Killing of a Sacred Deer centers around surgeon Dr. Steven Murphy (Colin Farrell), his family, and the peculiar relationship they have with a boy named Martin, whose father died years before on Dr. Murphy’s operating table. Curses, a mysterious illness, and games of life and death ensue, all leading to a disquieting morality tale of the highest order.

Midsommar marks the first, but not last, movie on our list directed by Ari Aster, the hottest auteur working in horror today. More than anything, A24 has a knack for the singular, creating movies that not only cut through the constant glut of horror but stake out a place all their own. Midsommar takes place largely in a secluded Swedish village where our protagonist, Dani (Florence Pugh), her boyfriend, and his ragtag group of friends are visiting during the town’s summer festival. But, as the group soon finds out, ‘summer festival’ does not exactly do justice to the pagan, ritualistic, cultish ceremonies the townspeople enact. What ensues is something barely describable but altogether entrancing, beautiful, and terrifying to witness.

The second film on our list directed by Robert Eggers, The Witch is a masterclass in yarn-spinning, unfolding like the most inspired and distressing campfire story ever told. This marks our first glimpse of Queen’s Gambit’s Anya Taylor-Joy whose arresting work as Thomasin, the eldest daughter of a cursed New England family, hints at the star she would soon become. I won’t give away too much of the film’s almost biblical plot but I will say the titular witch is almost secondary to the foreboding torment plaguing the film’s inhabitants.

We’ve arrived at the top spot on our list, the cream of the crop, the best A24 horror movie ever released. You can’t really overstate how affecting, and often terrifying, this movie truly is. For those who’ve seen Hereditary there exists a strict dividing line; before you arrived at the devastating mid-point twist and after you finally uncovered your eyes to watch the remainder of the film. If you’ve yet to check this one out – go now! You will know exactly what we mean. But Hereditary does not rely on one moment, instead slowly unspooling an increasingly nightmarish tale of a family with, let’s say, some issues. This is is truly a masterclass in filmmaking, horror or otherwise. Everything director Ari Aster does here is pure genius and meticulous, from the miniature set-pieces the family’s matriarch constructs, to the subtle creeping madness of the children. Horror can be so much more than haunted houses and bloody murders, and no one is better at letting talented creators find their own way into the genre than A24.