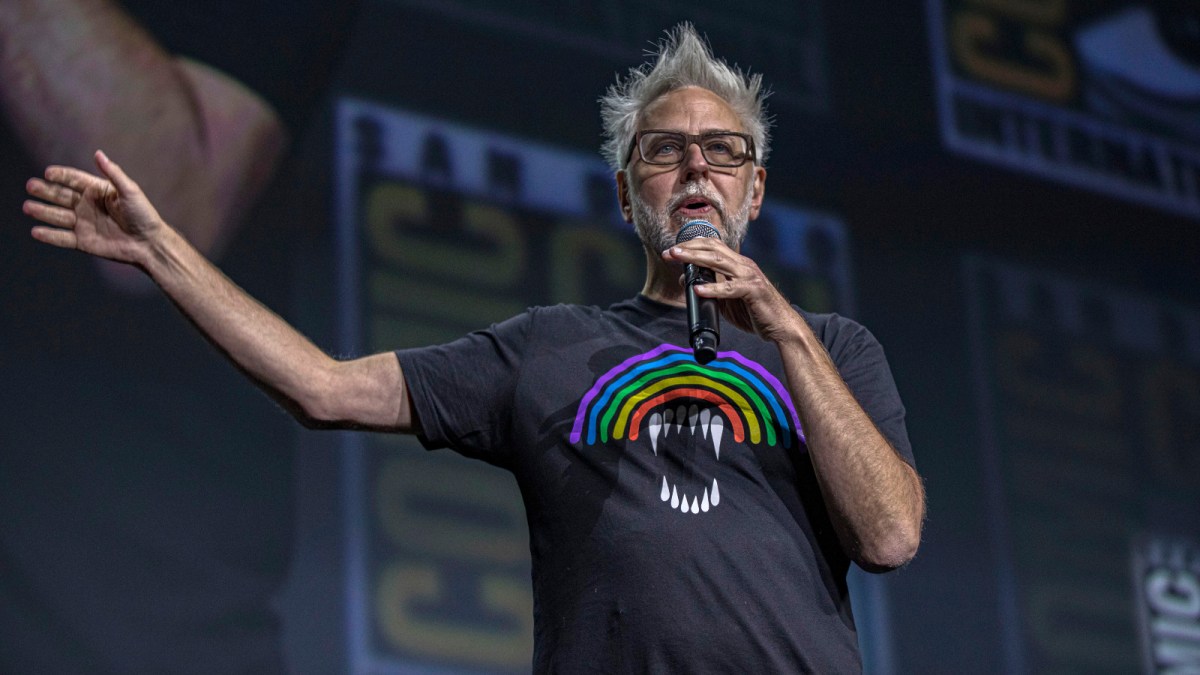 James Gunn is quickly proving himself to be the master of suspense. Since it was announced that Gunn would be taking over as co-chair and co-CEO of DC Studios, fans have been keen to learn what movies Gunn will make and how these films will shape the franchise’s future.

And Gunn has fueled these rumors by dropping hints pointing to various DC characters and story arcs. Of course, nothing is confirmed at the present time. But at the same time, this wouldn’t be the first time that Gunn has used his random social media posts to hint at upcoming projects.

Here are all the projects he’s hinted at so far.

On Nov. 30, Gunn sent ripples around the internet when he posted an image from the legendary DC comic Kingdom Come, drawn by beloved DC artist Alex Ross on his Twitter. Interestingly Gunn captioned the image “Making Plans”. Also, Gunn used this same image as the header image on his newly-made Hive profile.

Kingdom Come is a legendary DC story that sees a new generation of more-violent heroes fighting with the Justice League. However, it should be noted that Gunn might have picked this image because it shows Superman and other heroes making a plan.

Gunn posted an image of Deadman captioned “Happiest of Halloweens to each of you” on Oct. 31. Deadman is a very obscure DC hero, making his debut in Strange Adventures #205 in 1967.

Deadman is a former circus trapeze artist who gets murdered, only for his spirit to be saved and given the power to possess other people by the god Rama Kushna.

Interestingly, Deadman has appeared in several series over the years, including DC Rebirth, Blackest Night, and the previously mentioned Kingdom Come.

Holt is a genius, but when his wife and unborn child pass due to an accident, he believes he caused it. Because of this, he becomes increasingly depressed. This is until he meets Spectre, who tells him about Terry Sloane. Inspired by Sloane, Holt takes the Mister Terrific mantle. And eventually, he rises up the ranks and becomes the Justice Society Of America chairman.

Mister Terrific has appeared in quite a few things over the years, having roles in Justice League Unlimited and Justice League vs. the Fatal Five. A different version of the character also appears in the TV show Arrow.

When James Gunn joined the alternative social network Mastodon, he made an introduction toot. This toot said: “Happy to be here,” but Gunn attached an image of Lobo to it, causing fans to quickly start theorizing.

One of DC’s most popular characters, Lobo, made his debut in Omega Men #3 in 1983. The intergalactic bounty hunter has veered between being a villain and an anti-hero. The character also saw massive success in the 1990s. Since then, he has been a DC fixture, appearing in Krypton,  Superman: The Animated Series, and Young Justice. Over the years, there have been rumblings about various attempts to make a Lobo movie, but none have ever come to fruition.

On Nov. 16, Gunn posted an image of Jonah Hex to Twitter. While this date does mark the characters’ 50th anniversary, the internet still took this as a hint.

Fully debuting in All-Star Western #10 in 1972, Hex is a cowboy bounty hunter who frequently has run-ins with the supernatural. The character has appeared in many different forms over the years. The character has been featured in Batman: The Animated Series, Justice League Unlimited, Batman: The Brave and the Bold, and the 2010 live-action movie Jonah Hex.

A future Superman film doesn’t need to be speculated about. Superman is one of the most well-known heroes in the world. And the character has been at the forefront of some of Hollywood’s most successful movies. Because of this, the return of the Man Of Steel is a case of when rather than if. Because a DCU without Superman is a pizza without toppings.

However, this doesn’t mean that James Gunn can’t drop breadcrumbs. He did this on November 1st, with a tweet captioned “First day, new job.” Of course, like the Kingdom Come image, this could be Gunn conveying a general thought. With the comic image only being there for added visual flair. Rather than a hint at some larger idea brewing behind the scenes.

The second Gunn was appointed to his new role, fans started talking about a Bat-Mite movie as Gunn’s love of the character was well known. Gunn hinted at the beloved Fifth dimension-dwelling imp once more during a Zoom town hall for Warner Bros Discovery employees. During this town hall, Gunn listed off several characters he was a big fan of, and Bat-Mite was included within this list.

First introduced in Showcase #37 in 1962, the Metal Men are a group of 5 metal-themed robots (or artificial beings in some versions) created by scientist Will Magnus.

They’ve appeared in several DC projects, including Batman: The Brave and the Bold and DC Super Hero Girls: Intergalactic Games. And their combined form of Alloy was seen in Kingdom Come.

Like Bat-Mite, the Metal Men were mentioned by Gunn during the Zoom town hall. During this town hall, Gunn noted his affinity for the often-overlooked superhero team.

One of DC’s most legendary heroes, Green Lantern, plays a massive role in most of DC’s most memorable story arcs, including the previously mentioned Kingdom Come.

The biggest hint towards Green Lantern being in the future DCU came on Thanksgiving. Gunn posted an image of the Justice League enjoying a Thanksgiving dinner. However, when a fan jokingly pointed out that Green Lantern wasn’t in the picture.

Gunn’s suspiciously specific response prompted people to presume that he was hinting at the character’s future. However, like Superman, more Green Lantern content sounds like a case of when rather than if.