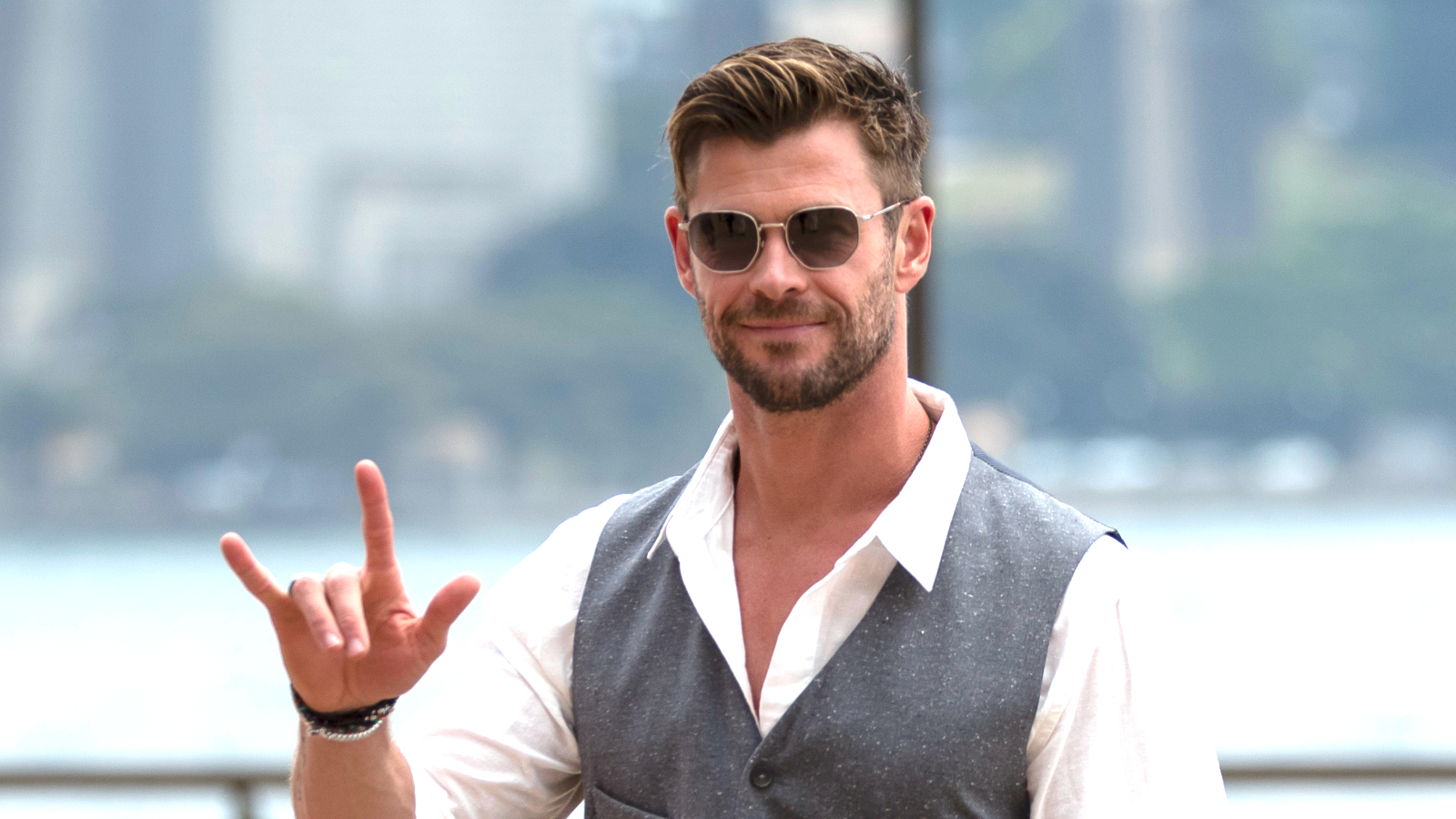 Ever since his introduction to American audiences in 2009’s Star Trek, Australian-born Chris Hemsworth has been stealing scenes and showing off his surprising range.

Only two years later, he became the man now well-known as the titular Thor starting with the 2011 film all the way up to this year’s Thor: Love and Thunder. Now he’s set to take on several roles over the next few years, all of which involve some action and physical ability in some shape, which just makes sense. Even when comedic actors delve into more serious or action roles, it’s a smart play to involve their comedy chops. The same is true in reverse — let Hemsworth unleash his comedic timing and emotional ability, but still, let’s see some action in there, too.

Here’s what we know about what’s coming up for the 38-year-old actor.

As might hit home with fans of Hemsworth from the MCU, this film has the characters battling with losing a grasp on things.

Adapted from Texas-born author and New Yorker writer George Saunders’ Escape from Spiderhead ⏤ the first film adaptation of his work ⏤ Spiderhead takes a familiar storyline, in which inmates are given a chance at a reduced or dismissed sentence in exchange for X, and blends in bit of Arkham Asylum-ness to it all, as these inmates are the subject of voluntary (kind of) experiments in exchange for the shorter prison sentence.

Hemsworth is cast as the subject who becomes aware of “a new drug capable of generating feelings of love” that makes him begin to question “the reality of his true emotions.” Once his character learns what is happening, he wants to know what is really happening and “sets out to discover the truth.” The twist? He’s not playing one of the inmates, but rather the man running the penitentiary.

Check out the full synopsis via Netflix:

In a state-of-the-art penitentiary run by brilliant visionary Steve Abnesti (Hemsworth), inmates wear a surgically attached device that administers dosages of mind-altering drugs in exchange for commuted sentences. There are no bars, no cells, or orange jumpsuits. In Spiderhead, incarcerated volunteers are free to be themselves. Until they’re not. At times, they’re a better version. Need to lighten up? There’s a drug for that. At a loss for words? There’s a drug for that, too. But when two subjects, Jeff (Miles Teller) and Lizzy (Jurnee Smollett), form a connection, their path to redemption take a twistier turn, as Abnesti’s experiments start to push the limits of free will altogether. Based on The New Yorker short story by George Saunders, Spiderhead is a genre-bending and darkly funny psychological thriller directed by Joseph Kosinski (TRON: Legacy, Top Gun: Maverick) and written by Rhett Reese & Paul Wernick (Deadpool, Zombieland).

The Hemsworth we’ve come to know and love as of late has shown a wide spectrum of emotional acting, and we’re hoping that this one will show his humorous and tender sides all at once — with some action and ass-kicking mixed in, of course.

Spiderhead is bound for Netflix and hits the home screen on June 17.

Covered widely everywhere, here’s where you can go if you want to get a bit deeper into what we know, what to expect, and what we hope for in the upcoming fourth Thor film coming to theaters on July 8.

At first glance, it didn’t seem like the 2020 release Extraction was the type of Netflix flick to draw so much love from audiences, enough to command a sequel. Yet, that’s the power of putting a great leading man (or woman) in front of a highly watchable movie on Netflix. It doesn’t have to be something worth leaving the house and spending money for, it just needs to be solid enough that we will click on it and check it out in the comfort of our homes at a time when we aren’t sure what to watch or are willing to watch anything with someone we like in it.

Shockingly, the film was lauded for its action and the performances from the likes of Hemsworth, but the storyline and plot were not so Grade-A (a not uncommon Netflix theme). In fact, in the first four weeks of its release, Extraction became the most-watched original film for Netflix, hitting a reported 99+ million homes.

In the sequel, Tyler Rake (Hemsworth), who survived being shot and falling off a bridge, returns to do what else? Extract innocent people. This time, the storyline is sure to be outshined by the immaculate action sequences gracefully shot and handled by director Sam Hargrave, who is back for the sequel as well. The pairing of Hemsworth and Hargrave also worked well on Avengers: Endgame in 2019, where Hargrave was a stunt coordinator, a role he also had in Captain America: Civil War, which Hemsworth’s Thor was not a part of.

This has all the potential and outlook of a franchise, with those involved even teasing that it could break out into spinoffs of other characters and stories or even evolve into sequels with or without the primary crew involved. Hemsworth showed how proud he was of part two in an Instagram post back on March 26.

“That’s a wrap ! Another Extraction film down. Shaping up to be an epic franchise which has only been possible with the blood, sweet, tears and passion of our amazing cast and crew. Massive thankful to everyone who’s been with us through this journey and cheers to many more, much love team. Can’t wait for you all to see this one! @netflix @samhargrave @therussobrothers #extraction2”

The plot is said to involve, somehow, a family who is somehow at the mercy of an imprisoned gangster, so Hemsworth’s character has to infiltrate one of the world’s deadliest prisons in order to save them. Things get dicier from there, as the gangster is taken out, but he has a vindictive brother who continues the pursuit of Rake and the family.

There is no confirmed release date for Extraction 2 yet, but it’s expected to be announced in the coming months.

If Max Max: Fury Road is any indication, and Hemsworth can follow Tom Hardy’s lead, then we’re in for something unlike we’ve ever experienced before. The prequel to Fury Road is set to be the origin story of Furiosa, with Last Night in Soho and the Queen’s Gambit star Anya Taylor-Joy set to take on the iconic role originally played by Charlize Theron.

Director and futuristic wasteland wondermind George Miller is back to direct this edition of Mad Max, and there might be a side of Hemsworth revealed that nobody expects to see. However, it’s not going to follow the same ride as its predecessor and will have a bit more moving storyline harkening back to the originals in the series, according to a quote from Fury Road producer P. J. Voeten in the book Blood, Sweat & Chrome by Kyle Buchanan. “Furiosa is more of a traditional three-act drama. If people are expecting to see another chase movie, it’s not going to be that,” Voeten said in the book.

Hemsworth’s role in the film, which is slated for a 2024 release, is set to play “the lead baddie” as we learned a couple months ago.

“George saw Chris initially as a courtesy, and then fell in love with the idea. He’s going to play totally against type, the lead baddie,” Voetten told SlashFilm. Unfortunately, we’ve got to find all of our other characters that aren’t around anymore: a new Immortan, a new Bullet Farmer, and a few others.”

Buchanan, a New York Times writer, was able to expand on the ideas behind the film as well.

“Miller sought to answer questions about what the character’s life was like in the idyllic ‘Green Place,’ why she was plucked from the group of woman warriors known as the Vuvalini, and how she became the hardened warrior we meet by the time Fury Road begins,” he said in a 2020 article.

This one’s a bit tricky, much like the life story of its namesake. Hemsworth was confirmed to be playing the lead for the planned Netflix film, and as we’ve seen, Netflix plus Hemsworth is a formula they’re both cool with continuing. However, due to COVID-19 pandemic shutdowns and delays, there’s been no word on this one in a while.

According to Hemsworth’s social media accounts, he was training for the role and somehow getting even bigger and stronger to better resemble the wrestling icon. Hogan himself stated that he liked Hemsworth’s work and that he was ready for the role.

“As you can imagine, the preparation for the role will be insanely physical. I will have to put on more size than I ever have before, even more than I put on for Thor,” Hemsworth said in an interview with The Evening Standard back in 2020. “There is the accent as well as the physicality and the attitude. I will also have to do a deep dive into the rabbit hole of the wrestling world, which I’m really looking forward to doing.”

Hemsworth also revealed back in 2020 while promoting the first Extraction film that he knew “very little” about the movie. “I know it’s being written now and worked on. I know very little about that. It’s sort of in the process now,” Hemsworth said in another interview with ScreenRant. “I’m just fascinated by that world, and I think they’re pretty keen to show a side of the world that people haven’t seen before. I’m as intrigued as you are,” Hemsworth said.

The last update we can dig up is cowriter John Pollono’s interview with Screen Rant in the fall of 2021, in which he said, “Look man, I don’t know what I’m allowed to say about that. They send people that script and they have to read it in two hours, it’s like top secret, so I’m not gonna be the guy who gets fired on it. But I’ll tell you, I’m really proud of the work, it’s great,” Pollono said.

“I love writing for great actors, I think Chris Hemsworth, like these guys, he’s awesome. You can make him funny and tragic and all that stuff. I’m really excited to see the movie and hopefully — I don’t know how COVID-friendly that movie would be to shoot ‘cause they got like 30,000 people in the crowds in some of these scenes, so hope eventually they get to make it. I can’t wait to see it someday.”

There’s been no official word yet, but if the MCU folks, namely James Gunn, don’t realize that above all else, fans just want Thor and the Guardians together more, then it’s a huge letdown and misfire. Sure, the MCU’s Phase Four is full of wonder and surprises and new storylines, but come on, we just want to see Thor and his new pals doing things together, including celebrating the holidays.

What, if any, role Thor would have in the upcoming Guardians films will probably be revealed to a degree when we get to see Love and Thunder this fall.