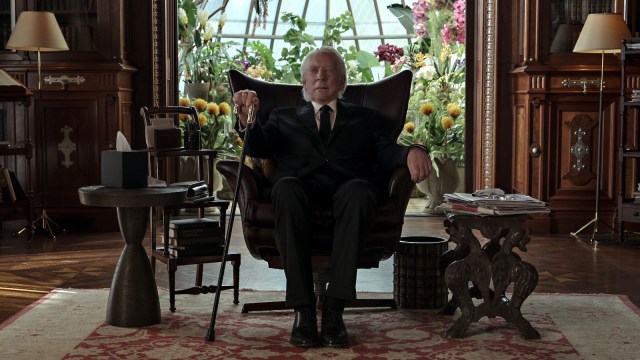 What if you could talk to the dead? That’s the premise of the brand new Netflix adaptation of the Stephen King short story Mr. Harrigan’s Phone, and the streaming company recently revealed a brand new look at the upcoming project.

The film tells the story of a young man named Craig (Jaeden Martell) who befriends an older, private billionaire named Mr. Harrigan (Donald Sutherland). Harrigan passes away, but Craig is shocked to find out he’s actually able to communicate with the deceased man from beyond the grave.

Netflix released a series of photos featuring Martell as Craig interacting with Harrigan. In one, he hands Mr. Harrigan an iPhone while the old man sits patiently. We also see Craig with some friends, being bullied at school, and looking at some flowers on Harrigan’s grave. Take a look below:

The movie was written and directed by John Lee Hancock, who handled the same duties for the hit movie The Blind Side in 2009. Hancock said that making the movie was a challenge because it was a shorter story than King’s usual fare, he told Netflix.

“Because it’s a novella and it’s only 80-something pages, [you have] to jump in and grab onto thematically what I think he’s trying to say and activate some of it into scenes that aren’t necessarily all in the novella.” Mr. Harrigan’s Phone appears in the 2020 story collection If It Bleeds.

Hancock said there was a lot of trepidation involved when he had to send the script to King himself.

“You finish a script and you realize you’ve got to send it to Stephen, and you’re going to get a thumbs up or a thumbs down. You go, ‘Oh my God, Stephen King’s reading my script. I hope he likes it.’”

Because the film is set in the mid-2000s, Hancock said the production team had to find age-appropriate phones to use in the film. Fortunately, Hancock’s assistant Jack Kramer had a few on hand.

“[Kramer] was a real tech whiz growing up. And he was one of those guys that would jailbreak phones and sell them on eBay. And he actually is from Connecticut where we shot. He had it all at his house there, which was only like 45 minutes away. And so prop said, ‘Do you have any?’ And he goes, ‘I got boxes of it.’”

While the phone is the narrative engine of the story, it’s by no means just a tale about technology, Hancock explained, and it’s definitely not a straight-ahead horror film. He compared it to some other King classics that were more dramatic than terrifying, like Shawshank Redemption, Stand By Me, and the Green Mile.

“More than anything, it’s about an odd relationship between a billionaire in his 80s and a [young man] and the bonds of friendship, and how far will you go for a friend?”

Mr. Harrigan’s Phone lands on the streaming service on Oct. 5.