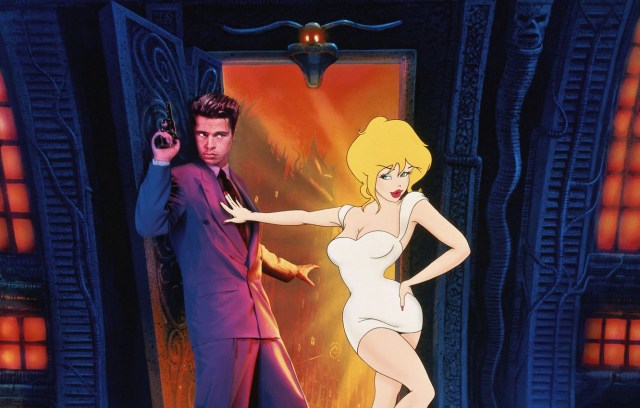 We all have our guilty pleasures; those movies we know are bad, yet somehow are still enjoyable. Today, it’s time to embrace the suck with nine of the worst films that are secretly our favorites.

Much has been written about the worst of the worst on Rotten Tomatoes. There is list after list of the big-budget fiascos that landed on the site’s bottom rung, some with the dreaded 0 percent Rotten rating. Truly, that is an accomplishment in itself. When a movie is so bad it was painful for critics to watch, that is a noteworthy performance.

While everyone has their opinions on the worst movies of all time, what about those guilty pleasures? They’re the ones that you know are overall bad, but there’s still that undeniable charm about them.

These days, it’s trendy for filmmakers to embrace the camp with a wink and a nod. In modern cinema, there are directors who become critical darlings by intentionally making bad movies disguised as art. Today’s list, however, isn’t for the self-aware filmmakers. Based on Rotten Tomatoes’ critical scores, these are some of the most reviled movies that still, somehow, manage to be entertaining.

Let’s get this ball rolling with some classic Tom Selleck, epic mustache and all. In Mr. Baseball, he plays an aging Major League Baseball star who isn’t ready to accept that his career is winding down. Critics called it a massive whiff at the plate, scoring just 12 percent, which is actually good for today’s list. Japan as a country, people, and society is portrayed in such a stereotypical manner that it borders on being racist. Of course, the film doesn’t hold back on its white American stereotypes, either, which is the point of the movie. Selleck’s Jack Elliott is arrogant, entitled, and boorish with a dollop of racism. However, the film’s heart is watching him see the error of his ways and learn respect for his coach, teammates, and basically the entirety of Japan.

Of course, we can’t have a worst-but-lovable movies list without Nicolas Cage. In what is more or less a feature-length Saturday Night Live skit, Cage is remarkably subdued, at least by his standards. Joined by SNL legends Dana Carvey and Jon Lovitz, Cage is the patriarch of their three-man criminal family who robs a small-town bank on Christmas. While it’s neither his best nor most outrageous performance, Cage, Carvey, and Lovitz are legitimately funny as a 1990s Three Stooges. If you call yourself a Cage fan, you owe it to yourself to give Trapped in Paradise a try.

The critics’ Rotten rating doesn’t do this movie justice. Much of that score could be from the disappointment when you have an all-star cast of the “next generation” of stars: Kiefer Sutherland, Julia Roberts, Kevin Bacon, and William Baldwin. Aiming to be a psychological thriller but advertised as closer to a supernatural horror, audiences and critics were thoroughly let down. However, knowing it is not an actual horror movie can help you appreciate the performances and the ‘90s style.

For all those who found themselves oddly attracted to Jessica Rabbit, Cool World is for you. With internet at our fingertips 24/7 nowadays, there’s websites devoted to, well, everything. Back in 1992, seeing a live-action Gabriel Byrne have sex with a cartoon character was a bit off-putting, to say the least. It definitely put a new spin on those “doodles” and “noids” terms the movie throws around.

Although both critics and audiences despised the film in its time, Cool World has developed a cult following based largely on its odd-yet-imaginative nature. Think of it as Who Framed Roger Rabbit? with more adult themes (and Brad Pitt). While the film attempted to be a dark comedic fantasy, reportedly Cool World began as an idea for a horror movie. That is a concept worth revisiting.

In the words of RiffTrax, “Cool As Ice…because 15 million of you sad bastards bought To the Extreme.” That about sums it up.

Looking to squeeze another 30 seconds into his 15 minutes of fame, the cinema gods descended from Hollywood to give us the Vanilla Ice movie. From a screenplay that could have been written by two drunk monkeys sipping on Zimas, the poster child for cultural appropriation was ready to become a movie star.

There’s nothing inherently good about Cool As Ice, but it makes for unintentional comedy of the highest caliber. Vanilla Ice tries to charm his way through this movie, somehow forgetting that being cocky doesn’t translate into being talented. However, the confidence by which Ice delivers his lines makes for some hilarious quotes. Being so overconfident in those outfits is a superpower all its own.

Who would have thought that within a year, Burt Reynolds could have gone from the low point of his acting career to the high, at least during the 1970s? Considered to be the single worst movie of his career, Gator was only one year ahead of the actor’s most beloved role in Smokey and the Bandit.

As bad as it may be, Gator has become a cult classic in many regards. Reynolds plays every country-tough-guy hero you’ve ever seen as he takes on a band of crooked cops. By no means is there an argument to be made that Gator is somehow a great movie, and the horrid 0 percent Rotten rating is well earned. However, there’s something fun about vintage ‘70s action cliches with some of the most famous character actors of the period.

How could a list about the worst movies that are somehow lovable not include Jean-Claude Van Damme? Here we have one of the most Van Damme of Van Damme films. Take virtually any JCVD movie from the ‘80s and ‘90s (with the exception of Universal Soldier, which is better than you might remember), and you have Death Warrant. Only this time, he’s roundhouse kicking the shit out of all sorts of stereotypes, though mostly minorities, in a maximum-security prison. It’s this movie that solidified him as the ‘90s version of Chuck Norris, and it’s another 0 percenter.

There’s not many times in life when I get to say these words, so I’m going to relish the opportunity: Pauly Shore was great in Jury Duty.

Yes, the movie is proudly low-brow with a plot that plucked the lowest hanging of mid-’90s fruit, the American judicial system. Jury Duty was released in the spring of 1995 when the country was enthralled with O.J. Simpson’s televised murder trial. As Johnnie Cochrane made a mockery of the Los Angeles Police Department and the legal system in general, Pauly capitalized. Here he plays Tommy Collins, a lazy freeloader who is the one human being excited about jury duty. As sophomoric as his antics may have been, seeing Shore drag out the trial to keep from going home is pure entertainment.

If there is one, single movie that is so hamfisted and nonsensical that it becomes pure comedy gold, it is Jaws: The Revenge. Had this movie been a self-aware Sharknado-style satire, it wouldn’t be nearly as great. The fact that it is intended as a serious thriller makes it all the more delectable.

The opening scene truly sets the stage for what is the most bizarre monster-shark movie ever put to film.

The implications in this scene alone are immense and tell you everything you need to know about the insanity that is The Revenge. Here is a great white that apparently has inherited a genetic hatred for the Brody clan. It then tracked down Sean Brody and set a trap for him. To accomplish this, the shark must have gone full Cape Fear and stalked him long enough to learn his work schedule. Then it left a log that it knew only Sean would move. The bobbing camera angle seemingly gives us the shark’s point of view as it waits for him to move said log before biting off his arm, which we can clearly see is still inside actor Mitchell Anderson’s jacket. I’m betting the shark had some inside help on this job.

By the end of the movie, we’ve got Ellen Brody with a psychic connection to the shark, Mario Van Peebles doing the worst/best Jamaican accent of all time, a Godzilla-like roar from a creature with no vocal cords, and Michael Caine just being Michael Caine.

Jaws: The Revenge deserves its 0 percent rating, but it’s such a train wreck of a production that it’s magically entertaining despite its best efforts to the contrary.