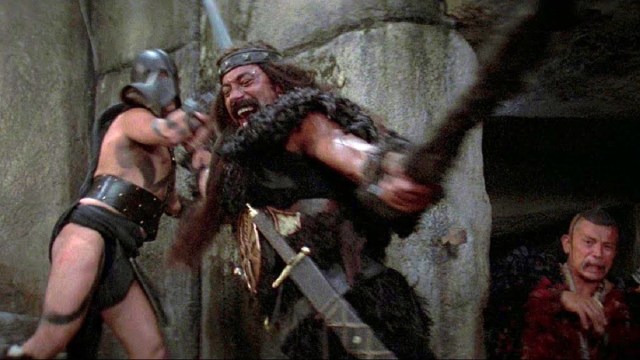 While there are many instances where genuine arguments can be made that classic movies have been superseded by even better originals, claiming that Conan the Destroyer is superior to Conan the Barbarian doesn’t hold much water.

The 1982 original delivered a rough and tumble fantasy epic that offer dirt, blood, bulging biceps, and mountainous amounts of swordplay, all anchored by the hulking Arnold Schwarzenegger doing a great job in every required department besides the one that requires actual acting.

It netted upwards of $70 million at the box office, and still holds Rotten Tomatoes scores of 65 and 74 percent from critics and audiences to this day. Conan the Destroyer arrived two years later, and the least of its problems is the drastically lower ratings of 27 and 38 percent on the aggregation site.

Sanding down the more hardcore elements of the opening chapter, it was a great deal campier, but not in a good way. Gone was the straight-faced seriousness shot through with an endearingly shoddy quality, and in its place was a sword-swinger that tried to increase the levels of humor way too hard, only to fall flat at virtually every turn.

And yet, the fact one of the top-voted comments on a Reddit thread claiming Destroyer is the better of the two reads “What SOCIOPATH thinks CONAN THE DESTROYER is better than CONAN THE BARBARIAN?” tells you all you need to know about just how valid the original opinion has proven to be. There are hot takes, and there is utter nonsense, and then there is being wrong.

One thing everyone can agree on regardless of personal opinion, though, is that Conan the Destroyer is at least superior to Red Sonja.