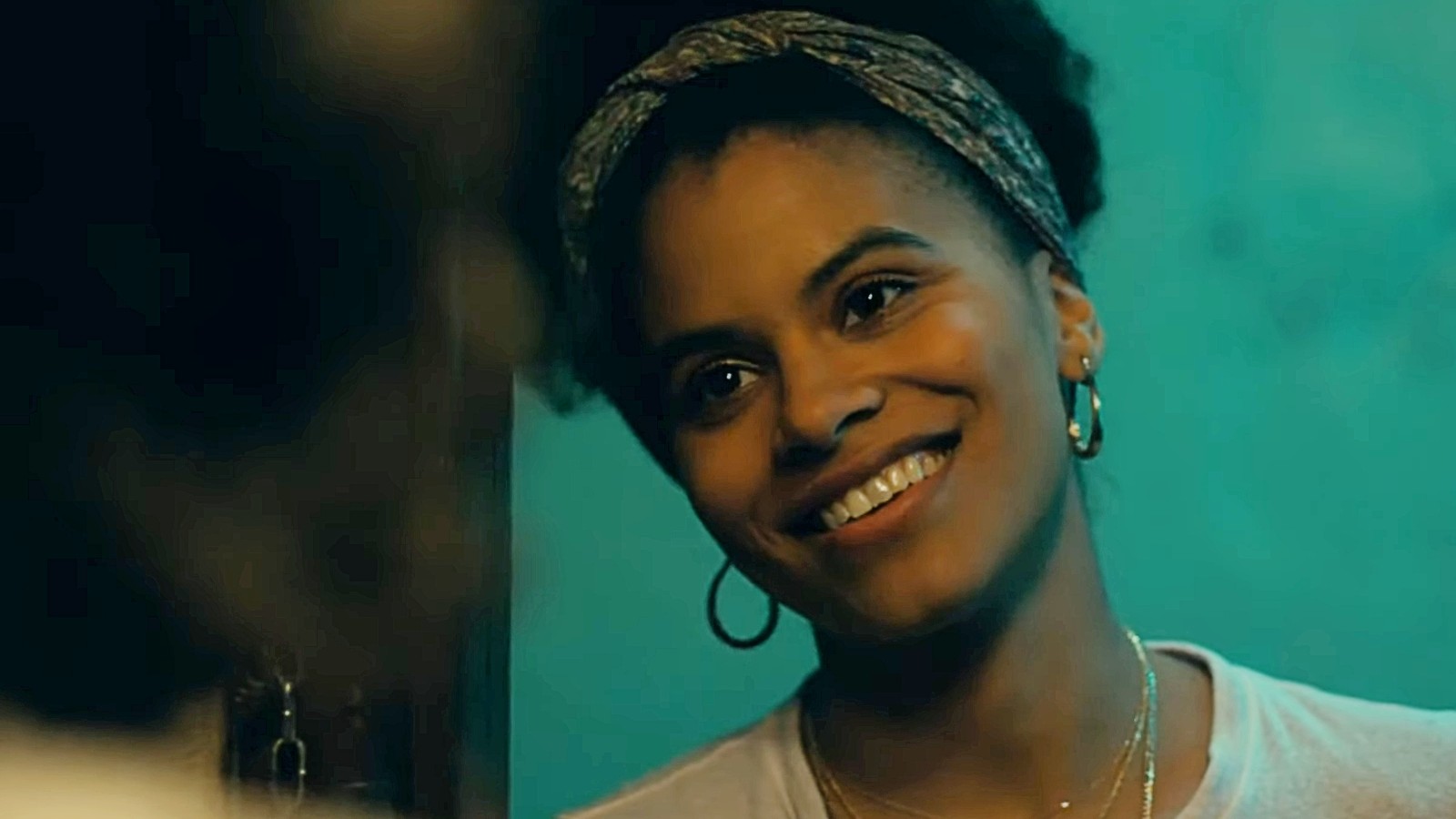 Zazie Beetz is reportedly in talks to return to the world of Joker in the sequel, Joker: Folie à Deux, begging the question of how her character’s story might continue from what was established in the 2019 box office smash.

Though Beetz has yet to officially confirm her involvement in Folie à Deux, she did recently clarify in an interview with The Hollywood Reporter that she believes her character, Sophie Dumond, survived the events of the first film.

“Yeah, in my mind, she lives because she never actively wronged [Joaquin Phoenix’s Arthur Fleck, AKA Joker]. His victims in the film were generally people that pointedly hurt him. Even within the horror of his realization around his own state of mind, he acknowledges that she’s more of a bystander to his situation than an actor to his situation. So, to me, it made sense that she wouldn’t be harmed by him because his harm was intentional towards certain people and then society at large, which he also felt wronged by in a way. So in my mind, she makes it out unscathed, at least physically. (Laughs.)”

Beetz’s assessment generally falls in line with what director Todd Phillips has said about the character. Phillips even released a “final shooting script” that included a scene that ultimately did not make it into Joker, in which “Sophie watches Arthur Fleck (Joaquin Phoenix) commit murder on live television,” the THR article said.

In that same interview, Beetz also praised the rumored direction for Folie à Deux being a musical and even indicated that “singing and dancing is quite a cathartic experience for me,” seemingly further cementing her as a great match for the film.

Lady Gaga has been confirmed for Folie à Deux and it is rumored she will be playing Joker’s partner in romance and crime, Harley Quinn, the supervillain’s psychiatrist-turned-sidekick.

With Sophie’s original portrayal in Joker as an idealized love interest, whose relationship with Arthur only existed in the troubled comedian’s mind, the single mom trying to get by in Gotham City could take a few different directions with her continued story in Folie à Deux, including pairing up with other side characters or possibly even becoming a supervillain herself.

Sophie becomes the love interest of a young James Gordon

With Joker taking its own spin on the world of Gotham City, we could see a rewriting of history with the comics’ source material. Perhaps as a subplot in Folie à Deux, we see Sophie continuing her struggles as a single mom in the unforgiving urban environment.

After Joker escapes, with the help of Harley, from Arkham State Hospital, up-and-coming Gotham City Police Department Detective James Gordon interviews Sophie to try to get more insights about Arthur Fleck since he was Sophie’s neighbor. Throughout the course of the film, James falls in love with Sophie and he eventually marries her, adopting Sophie’s daughter as his own.

Though Harley fawns after Joker, maybe he becomes fixated with Sophie again and selects her as a target, with Arthur becoming jealous that she has found romance in her life. James must protect Sophie from the wrath of both Joker and also Harley, who is jealous of Joker’s obsession with Sophie.

This could set up an interesting universe far beyond the events in Folie à Deux. Perhaps we find out, years in the future, Sophie’s daughter, who we learn is called Barbara, becomes the next Batgirl.

With Harley Quinn rumored as the co-lead of Folie à Deux, that could seemingly remove Sophie as a possibility for the main love interest in the Todd Philips-directed sequel. So why not pair up her character with another loose end from the first film: the child-aged Bruce Wayne?

Dante Pereira-Olson appeared briefly in Joker as a young Bruce Wayne who survives a creepy encounter with Arthur Fleck. It’s implied in the film that Arthur may or may not be the illegitimate son of Thomas Wayne, and thus Bruce’s half-brother. By the end of the movie we see that Bruce’s parents get killed in an alleyway, much like in the comics, during the riots led by Joker.

With Sophie seeking a suitable enough income as a single mother to provide for her child, perhaps the Wayne estate ends up hiring her as the now-orphaned Bruce Wayne’s caretaker. She could become the stand-in for Phillips’ version of Alfred Pennyworth. Perhaps witnessing what unfolded with her mentally unstable neighbor, and watching him murder someone on TV, inspired Sophie to take up martial arts as self-defense, a skillset that she subsequently passes on to the young Bruce.

Maybe by the end of Folie à Deux, Joker and Harley, having escaped Arkham State Hospital together, come after Wayne Manor once again so Arthur can exact revenge for the wrongdoing of Bruce’s father, once and for all, and finally settle the score with his more-privileged half-brother. Sophie and the young Bruce have to team up and set up booby traps, Home Alone style, to defend themselves against Joker and Harley’s invasion.

Although Poison Ivy’s original name in the comic books is Pamela Isley, we think there could still be a justification for Sophie becoming the character instead. Arthur Fleck is an original name in the Joker film, so it’s clear there is room for interpretation from the comic book source material. What makes us convinced Sophie might become a good Poison Ivy? First of all, the queen of all things plants is famously pals with Harley Quinn in the comics so it’s only natural to start mulling a Poison Ivy origin once you start bringing Lady Gaga’s Harley into the conversation.

It just so happens that Beetz did a jaw-dropping photoshoot earlier this year with W Magazine in which she even sports a very green and plant-themed dress that practically serves as a costume test for her to take on the character.

What’s more, many fans of Matt Reeves’ The Batman have already been pitching their version of a grounded and realistic interpretation of Poison Ivy as a “bioterrorist and an activist” out for some kind of revenge, as one user on Reddit put it on the DC_Cinematic subreddit.

Over on TheBatmanFilm subreddit, another Reddit user put forth the idea of “an actual ecoterrorist trying to destroy Wayne enterprises for all the ecological devastation they’ve caused.”

Another Reddit user on the r/Batman subreddit pitched It actor Sophia Lillis as a perfect “college age eco-terrorist.”

The common thread with these pitches is a portrayal of Poison Ivy that doesn’t necessarily have the ability to talk to plants but is instead portrayed as a more realistic eco-terrorist motivated by some kind of egregious pollution scandal that happens because of neglect from Gotham City or Wayne Enterprises.

Gotham City is portrayed in Joker as piling up with garbage due to a sanitation worker strike and leaving people with mental health problems without medication due to a shrinking city budget, all while aristocrats like Thomas Wayne continue to seemingly hoard their wealth. We could totally see some kind of pollution scandal to top off the debauchery as part of the plot of Folie à Deux.

Sophie has already been established in Joker as a single mother in what appears to be the same slum-like apartment building occupied by Arthur and his mother, Frances Conroy’s Penny Fleck. Perhaps the building is not up to code and Sophie’s daughter gets lead poisoning from the poor plumbing in the apartment, leading Sophie to seek revenge on Gotham City by way of acts of eco-terrorism. Maybe she will even team up with Harley and Joker after the pair escapes Arkham State Hospital in some kind of plot to bomb City Hall, or something similar.